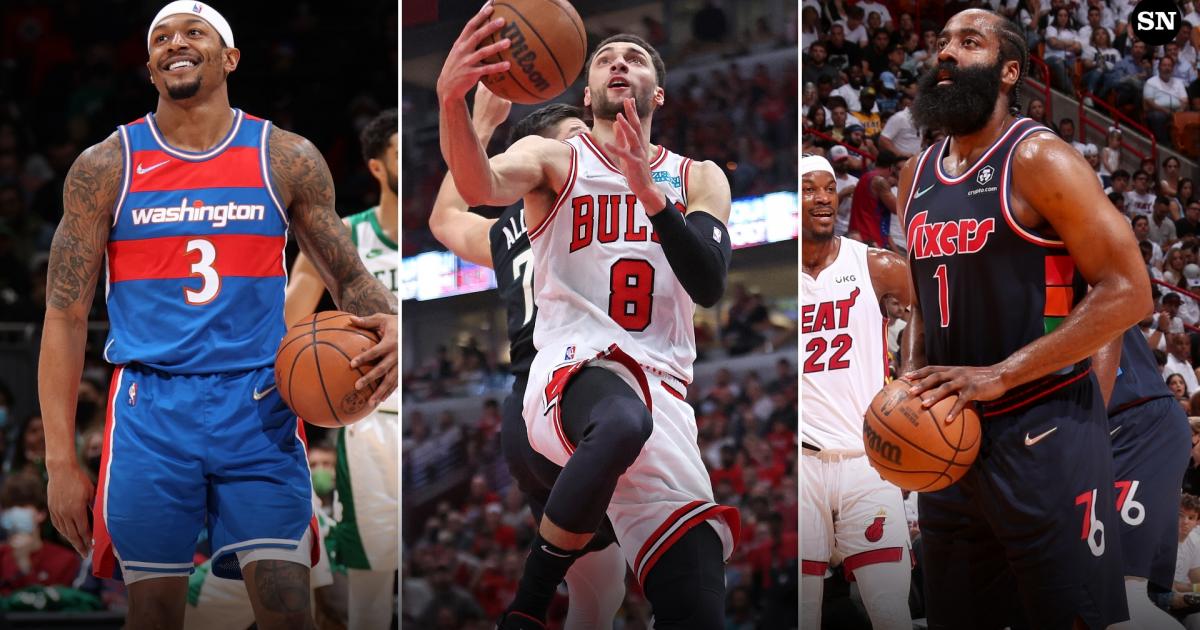 When the clock strikes 6:00 p.m. ET on Thursday, June 30, free-agent negotiations will begin.

This year’s free-agent class isn’t one of the deepest in recent memory, but it’s still headlined by a trio of multi-time All-Stars in Zach LaVine, Bradley Beal and James Harden. It also features one of the league’s rising stars in Deandre Ayton and one of this season’s breakout players in Jalen Brunson.

Click here for a ranking of the top 25 players available in free agency by TSN’s Steph Noh.

While players can’t officially sign deals until 12:01 p.m. ET on July 6, plenty of them will agree to terms over the coming week. As they do, The Sporting News will be tracking all of the notable signings and trades.

Click below to jump down for more information on the biggest deals.

The Bulls needed some frontcourt help and they’ll get that in Drummond who has reportedly signed a two-year, $6.6 million deal, according to ESPN’s Adrian Wojnarowski.

After being traded to the Nets at the deadline last season, Drummond averaged 11.8 points and 10.3 rebounds per game in Brooklyn.

The Lakers have targeted more youthful pieces in free agency so far. According to The Athletic’s Shams Charania, Los Angeles has signed both Lonnie Walker IV and Troy Brown Jr.

The Pistons traded for the former No. 2 overall pick last season and Bagley was solid for his new team, averaging 14.6 points and 6.8 rebounds per game.

Detroit seems to like his potential for the future of the franchise, as it has signed Bagley to a three-year, $37 million deal, per Yahoo Sports’ Chris Haynes.

Despite rumors that the Magic were ready to move on from Bamba, the former top-five pick has signed a two-year, $21 million deal to return to Orlando, per Yahoo Sports’ Chris Haynes.

The Thunder have reportedly reached a five-year, $87.5 million deal with Dort, one of the league’s premier defensive stoppers. Dort averaged career-highs across the board last season, posting 17.2 points, 4.2 rebounds, 1.7 assists and 0.9 steals per game.

The Lakers lost out on Monk, who signed a two-year, $19 million deal with the Kings, per a number of sources.

Los Angeles did make one signing so far, though. It added frontcourt depth in Jones – a 27-year-old center who averaged 8.1 points and 4.4 rebounds for the Kings last season – on a two-year deal, per ESPN’s Adrian Wojnarowski. The dollar amount has not yet been announced.

The Trail Blazers have locked up their 23-year-old rising star for the future, inking Simons to a four-year, $100 million contract extension, per ESPN’s Adrian Wojnarowski.

As reports indicated leading up to free agency, Tucker will reunite with his former teammate in James Harden and former front office personnel in Daryl Morey by signing a three-year, $33.2 million deal with the 76ers, The Athletic’s Shams Charania announced.

The Mavericks were expected to get one more meeting with Brunson, but NBA Insider Marc Stein was first to report that the meeting was called off moments before free agency began.

Ensuingly, The Athletic’s Shams Charania reported Brunson intended to sign a four-year, “near” $110 million deal with the Knicks.

Later in the evening, ESPN’s Adrian Wojnarowski finalized the report, announcing the Knicks have landed Brunson for four years, $104 million. He has a player option in the final year of his deal.

During the madness of Kevin Durant’s trade request from Brooklyn, The Athletic’s Shams Charania also reported the Nets have acquired starting forward Royce O’Neale from the Jazz in return for a 2023 first-round pick.

The day before free agency opened, news broke that the Hawks have agreed to trade Danilo Gallinari, three first-round picks and a pick swap to the Spurs for one-time All-Star Dejounte Murray. According to ESPN’s Zach Lowe, the 2025 and 2027 first-round picks Atlanta is sending San Antonio are unprotected.

TSN’s Nick Metallinos gave the Hawks an A- and the Spurs a C for the deal. You can read his full grades here.