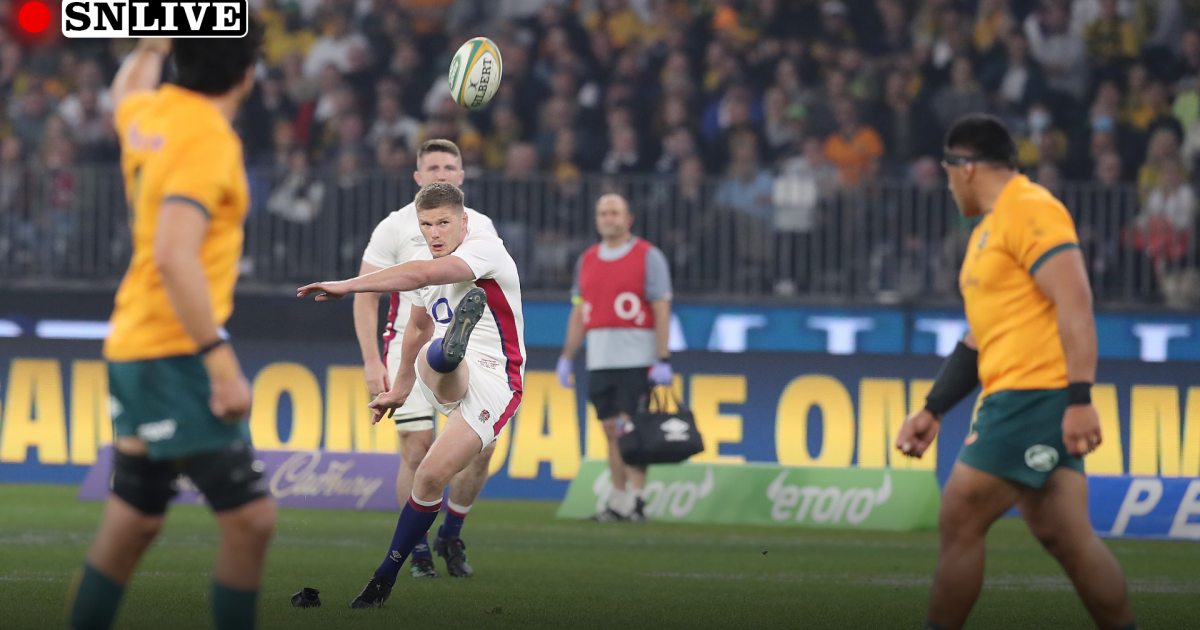 Australia went in level at the break against England in the first Test but were left reeling by Darcy Swain’s red card.

The Wallabies lost Quade Cooper to a calf strain in the warm-up, but Noah Lolesio stepped up in assured fashion and landed two kicks to cancel out Owen Farrell’s earlier efforts.

That made the score 6-6 but Swain left Australia with a mountain to climb after aiming a headbutt at his second-row rival Jonny Hill. The England man was sin-binned for a hair pull that caused the flashpoint.

Australia also saw Tom Banks and Allan Alaalatoa depart due to injuries as they faced up to a gruelling second 40 minutes.

Australia vs. England live updates, highlights from the 1st Test

66th minute: Lolesio… nails it! Australia lead and they have a quarter of an hour to close out a famous victory. Jones sends on Cowan-Dickie for George.

Brilliant from the 14-man Wallabies. Sharp passes, Michael Hooper makes a key break and Petaia goes over in the corner. It’s all square with the extras to come.

61st minute: Farrell’s boot has not been at its unerring best but that’s bread and butter and England are five points to the good. Ludlam and Mako Vunipola are on to try and grind tired Australian legs into the dirt.

59th minute: Smith gets the chance to pull some sparkling work together in the loose. He flips a pass to Itoje but the skipper’s handling lets him down. Lolesio has been good from the tee but he’s botched a catch from a high ball just then before giving away a penalty. Farrell should increase England’s advantage.

56th minute: Heroic work from Australia as England kick for the corner and Vunipola looks to blast a way through. The hosts get enough bodies back to get the ball into touch. From the resulting lineout they win a penalty.

53rd minute: Hill and Genge both infringe at the breakdown and there’s no need for that from England. They’re in prime position to close out the win here, but they need to sharpen up in those aspects.

England get a rolling maul to work after an initial Australian counter-drive and it brings the opening try — the sort of try that sounds a knowing warning to a team operating at a man disadvantage. Farrell hooks the conversion across the posts and the tourists have to settle for five.

45th minute: Good defence from the Wallabies, who get turnover ball and Kellaway aims a lovely kick to touch just outside the England 22.

43rd minute: Three out of three for Lolesio and the injury-hit and depleted Australia lead! Back comes tonight’s pantomime villain Jonny Hill.

42nd minute: Excellent restart from Lolesio, backing up by a thundering hit from replacement fullback Petaia. Australia have another penalty and they’d love to take the lead before the hard slog of 15 vs 14 takes hold.

Halftime: Australia need to make the most of this 14 vs 14 spell and win a penalty. Lolesio gets them in level at the interval but England’s one-man advantage looks sure to be key after Swain lost his rag. Once Hill is back from his stint in the bin, Jones will look for his men to turn the screw.

On Sky Sports’ coverage, Dylan Hartley – who knows a thing or two about disciplinary issues – has blamed the whole snafu on a lack of “business haircuts”. Fire up the clippers, lads!

39th minute: As you’d expect, things have got a little bit fractious after all that. Care gets an unceremonious welcome back to international rugby from Koroibete’s latest lusty hit.

34th minute: Darcy Swain is sent off!!!!!! Once the TMO saw the attempted headbutt, the officials had little choice. Hill is in the sin bin for his hairpulling but will almost certainly view his tomfoolery as worthwhile.

There is some mutual hair pulling between Jonny Hill and Darcy Swain! England’s Hill is sent to the sin bin and Australia’s Swain is sent off for a 𝐇𝐄𝐀𝐃𝐁𝐔𝐓𝐓! ⤵️ #AUSvENG pic.twitter.com/MBpkwdlB6l

32nd minute: Big pressure from Australia after Bell bulldozes through. The hosts have a penalty coming for offside but sense the first try of the series. The tourists see out the danger but here’s Lolesio with a chance to level matters.

Oh, hang on… the TMO is looking at replays of Hill and Swain pulling one another’s hair. After a thoroughly grown-up exchange, Swain then stuck the nut towards his England counterpart and he could be in big bother.

30th minute: Crossed wires in midfield as Smith spins a pass behind Farrell’s back and the England attack breaks down.

26th minute: Farrell gets another chance after sharp work at the ruck from Care. This one is a little further out to the right of the posts but still comfortably within range. But the Saracens star drags it just wide! Meanwhile, Australia’s injury list is stacking up. After the pre-match blow for Cooper and Banks’ painful conclusion, Alaalatoa makes way for an HIA. He looks pretty groggy and that could be the tighthead prop done for the evening too.

23rd minute: Excellent work from the Australia pack and England collapse the scrum. A chance for Lolesio to get the hosts on the board… he does just that!

22nd minute: Oh dear, that looks incredibly painful. Banks comes careering over the top of Vunipola looking to retrieve the high ball and the fullback lands heavily on his arm. That could be a pretty nasty injury and it’s the end of his evening as Petaia enters the fray.

21st minute: After all that, it’s back for the penalty and Farrell does his thing. 6-0.Australia will take that outcome, especially as they could have been punished for a professional foul.

18th minute: Long advantage for England as they continue to search for a way through the Australia defence… and Curry finds one. Over to Marchant and that’s an outrageous try-saving tackle from Koroibete!

A brilliant cover tackle stops England in their tracks! 👏

13th minute: Farrell with the up and under, brilliant hands from George. England work possession back across the field. Vunipola looks to make progress through the middle but concedes the penalty for holding on. Still, overall it’s some more good work on the front foot from England. Jones will like what he’s seen so far.

10th minute: Strong work from Stuart at tighthead and England win a scrum penalty in their own territory.

7th minute: No mistake, as you’d expect, from England’s Mr Reliable, who opens the scoring with the minimum of fuss. Learning precisely nought from that setback, Australia restart play and concede a penalty at the breakdown. If they don’t tidy up their work there it could turn into a long night for the Wallabies.

5th minute: Scrums have so often been Australia’s downfall in this fixture but they get the penalty here. Early tester for England fullback Steward. Forward they come, typically sharp turnover work from Tom Curry and there’s an early penalty chance for Farrell.

2nd minute: George ensures England’s first lineout finds a home. Care into his work early on his international return. Some sharp phases, with Genge carrying hard but Australia hold up the front row and earn the put-in at the scrum.

1 minute from kickoff: We’re a little bit past the advertised kickoff time but on with the pre-match pleasantries after a spectacular fireworks display at the Optus Stadium. Australia like playing here and it’s a cracking atmosphere.

10 minutes from kickoff: Big news from the warm-up and it’s bad for Australia. Quade Cooper has pulled up injured and is out. It looks like a calf problem. Noah Lolesio moves into the starting XV at fly-half and James O’Connor steps up to the bench.

15 minutes from kickoff: There’s plenty of intrigue around how England’s creative engine room will function. Veteran scrum-half Danny Care is back from a four-year international exile and is paired with fly-half Marcus Smith, his mercurial Harlequins teammate. Outside Smith at 12 is the steadying influence of Owen Farrell, whose imperious kicking game will need to be on point from hand and tee.

30 minutes from kickoff: Last time England were in Australia six years ago, they ran out 3-0 winners in a stunning series whitewash. That was very much the start of their adventure under Jones, who had not even been in post 12 months by that point after England’s 2015 World Cup failure. That was unquestionably the start of something quite special. The question today is whether we’re now reaching the end of a story.

50 minutes from kickoff: There’s a bumper schedule of internationals today, with all of the home nations in action down in the Southern Hemisphere. England will hope to fare better than Ireland, who have just been given a lesson in clinical finishing from New Zealand.

1hr 5 mins from kickoff: Hello and welcome to The Sporting News’ live coverage of the first Test between Australia and England.

🎧 Can’t wait to run out in front of our home fans at Eden Park!

Australia head coach Dave Rennie has opted for an experimental squad for the series with less than a third of his 2019 World Cup panel included this time around.

Cadeyrn Neville, 33, will become Australia’s third-oldest debutant since the Second World War with a start in the second row. There is also a debut for Dave Porecki.

Michael Hooper captains a side that includes Quade Cooper, Samu Kerevi and Marika Koroibete, the Japan-based trio having missed the Wallabies’ spring tour.

Jones updated his squad to 36 players ahead of their departure from the UK with experienced pair Danny Care and Billy Vunipola both called up as late additions with 10 players ruled out through injury.

Courtney Lawes will start the first Test as captain, with Vunipola in at No.8 and Care starting for the first time since November 2018.

How to watch Australia vs. England

USA/Canada/Australia: Streaming is available on Flo Rugby, which is available through the Flo Sports App and Roku, Fire TV, Chromecast & Apple TV.

Viewers in Australia can also subscribe to Stan Sport, which offers a free seven-day trial.