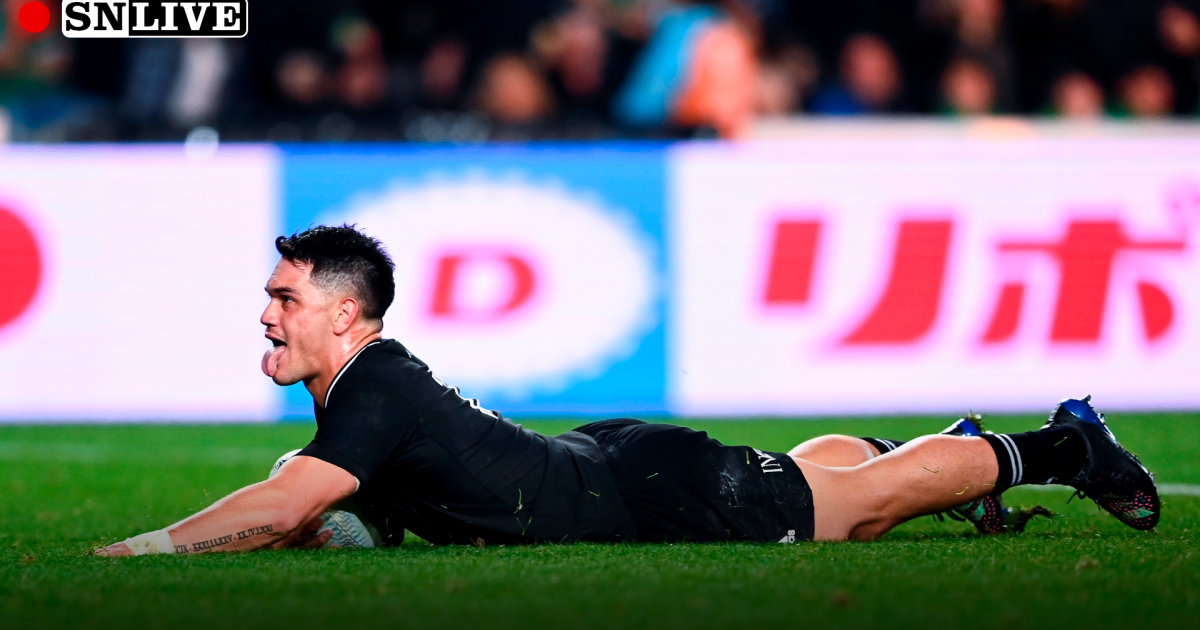 Keith Earls’ sixth-minute try gave Ireland an early lead against New Zealand before the All Blacks turned on the style at Eden Park.

Jordie Barrett levelled against the run of play and the full-back was perfect from the tee during the first half, also converting tries from Sevu Reece, Quinn Tupaea and Ardie Savea, while a nightmare period was compounded for Ireland as they lost Ronan O’Gara to injury,

Andy Farrell’s side have never won in New Zealand, while the All Blacks have not lost at their Eden Park fortress since 1994.

58th minute: Aki is on for Ireland and immediately trying to punch holes in the All Blacks defence as Ireland enjoy a spell under the posts. Sturdy stuff again from the All Blacks on their line. Carbery spots a gap.. is he over? Was that high? Will it be a penalty try? Answers to all that as soon as we get them!

Some respite that. Savea has his second of the night but a lot of the credit goes to Smith’s immaculate pass that left the Ireland defence scrambling. Ringrose couldn’t check the number eight, who motored through to the line.

52nd minute: Porter crumples to the ground under pressure at loosehead. We’ll try again.. and it’s a free-kick to Ireland. Unexpected respite for Farrell’s side.

49th minute: New Zealand back on the front foot. Ireland come through this attack unscathed up to a point but there’s an All Blacks scrum bang in front of the posts.

Game on! Ireland camped out on the All Blacks line in the far corner. They work possession all the way across to the left. They need to make this count and Ringrose does. That’s a fabulous finish under pressure from the Leinster man. And Carbery nails the conversion.

41st minute: We’re back underway. Still no sign of Sexton, who could return if his concussion check comes up all clear. Replacement Carbery gets a penalty in a good position but kicks for touch. Ireland can’t overhaul this deficit in threes!

Halftime: The hooter goes as Eden Park rises to acclaim their heroes. It certainly didn’t look like panning out this way midway through the half. Ireland started superbly. They even responded well to Jordie Barrett’s try cancelling out Keith Earls’ early opener. Safe to say they did not respond well to what unfolded during the final 10 minutes of the half.

Ireland’s world has caved in here. New Zealand stream forward with abandon again. Smith chases his own kick. he can’t ground it but the scrum-half thinks fast and taps sidewards for Savea to gleefully plonk himself on it. The TMO confirms the play was not forwards. Jordie Barrett adds the extras, but you knew that, right?

And another! Ireland have turned over possession on their last three attacking possessions and, boy has it hurt them. Beauden Barrett sizes up the mild disarray ahead of him and sends through a cute kick for Tupaea to enjoy an easy finish. The TMO confirms the centre was onside. Jordie Barrett goes three from three from the tee.

33rd minute: Big hit from Cane on Furlong, who shells the ball. New Zealand suddenly liking the look of this.

32nd minute: To cap a wretched couple of minutes for the visitors, Sexton has gone off after taking a blow to the head. Carbery is on for the veteran fly-half, who was masterful at times during the opening exchanges.

Jordie Barrett converts and the All Blacks extend their lead to 14-5! 🏉 #NZvIRE pic.twitter.com/ec8oRN5gPU

Ringrose fumbles, tries to hand off to Lowe, who loses his footing. Reece pounces and races 80 metres to score. Barrett converts again and Ireland will be scratching their heads over this scoreline.

29th minute: More Ireland pressure, Earls has the All Blacks scrambling again. Ireland keep the move going, back inside and into the 22. There’s Van der Flier again, who is absolutely on one. Oh, but hang on…

25th minute: Ireland get back to their work and get the ball through hands nicely approaching the New Zealand 22. But Lowe’s handling lets him down and it spins out of play.

Bang! The All Blacks have been ropey for 20 minutes but there’s a brutal reminder of their class. Faingaanuku tears away down the left and Ireland just manage to hold him up before the line. New Zealand get quick ball and Smith’s pass is immaculate for Jordie Barrett to crash over. Unlike Sexton before him, he slots the conversion and the hosts lead against the run of play.

19th minute: Sexton tries another of those cheeky kicks into midfield but Tupaea is wise to it this time. Ireland have shown they are definitely willing to gamble if it means putting New Zealand under pressure. The way Van der Flier is tearing about the place in defence will only be giving them confidence in this bold approach.

17th minute: Ryan mis-controls on this occasion, with the jump not timed. There’s a knock-on and New Zealand have the put-in on their 10-metre line.

16th minute: Van der Flier pouches himself a couple of Barretts as New Zealand try to run their way out of trouble to no avail. Eventually there’s a hacked kick into touch from behind their own line and Ireland will have good lineout position.

15th minute: Sexton spies a kick down the middle and Ringrose is in pursuit. New Zealand snuff out the danger but opportunities keep coming for Ireland!

14th minute: Big scrum from New Zealand on and Ireland put-in. They win the penalty and the hosts certainly needed that psychological lift.

11th minute: Brilliant turnover from O’Mahony, who shows his versatility with a grubber that sends Earls scampering away down the right away. New Zealand scramble into touch.

10th minute: Good evening! Ringrose lines up Cane an piles through with a shuddering tackle. There’s a break in play before a scrum on the Irish 10-metre line and the All Blacks have a bit of a conflab. The statistics show Ireland to be superior in terms of possession and territory so far, along with the scoreline. There’s a long way to go but it’s not going to plan for the hosts so far.

8th minute: It wasn’t the most favourable angle but that’s uncharacteristically wayward off the tee from Sexton, who fails to add the extras.

Ireland have the advantage and use it well, with Sexton instrumental and Earls goes over in the corner for his 35th international try. What a start from Farrell’s men!

5th minute: Ireland venture into the New Zealand 22 and they’re battering a path through! Sheehan to within two metres. Here’s the hooker again, he’s been instrumental in this attack. Vital tackle on Henshaw as the All Blacks hang on…

3rd minute: The teams feel each other out with a bit of kicking tennis. Ireland look a bit nervy but they get good numbers around Jordie Barrett, who sends a little grubber kick towards the right corner and Ireland have a lineout 10 metres from their own try line. Beirne gets up to take it with the minimum of fuss

1st minute: Bauden Barrett gets us underway. That’s high and deep into Ireland territory. Scrum just outside the visitors’ 22 and they have the put-in.

5 mins from kickoff: The teams are out. Anthems and the haka. Not long now!

10 mins from kickoff: All three Barrett brothers are in the New Zealand XI. Jordie and Bauden will be doing their things at full-back and fly-half, while Scott is probably the most intriguing selection. His only previous Test start at six came in the 2019 World Cup semi-final loss to England.

25 mins from kickoff: Ireland did endure a 32-17 defeat to the Maori All Blacks in midweek, although head coach Andy Farrell fielded an experimental line-up with an eye on the Test. Keith Earls is the only player to have retained his place in the starting XV from that game, while Cian Healy has recovered from a second-half injury to take his place on the bench,

35 mins from kickoff: After Schmidt helmed that breakthrough win over New Zealand in Chicago in 2016, Ireland have beaten the All Blacks twice more. It gives them three victories out of the past five, although their most recent defeat was a 46-14 shellacking in the 2019 World Cup quarter-finals.

“Joe gave us some great insights on New Zealand,” Ireland captian Johnny Sexton said this week. “He’s the one who made us believe that we could beat them. The biggest thing he did was he showed us the standards that are required day in, day out.”

Sexton added that there’s been a friendly atmosphere this week, with Schmidt popping over for a coffee with a few of his former charges and offering assurances that he hadn’t had too much impact upon Foster’s wider plans. Does the experienced fly-half think that will be the case?  “No I don’t, no! I don’t believe a word,” he chuckled.

50 mins from kickoff: If you’re an Ireland fan, the historical omens aren’t good, with no win ever in a New Zealand Test and the All Blacks not losing at Eden Park since 1994. But Ireland triumphed when the sides met in Dublin eight months ago and, over recent years, they have packed a serious punch against the Southern Hemisphere giants.

Joe Schmidt did much to mastermind a celebrated era in Irish rugby, which featured three Six Nations titles culminating in a 2018 Grand Slam. There is no little irony, as Ireland seek to conquer a final frontier he did so much to bring into view, that Schmidt has been parachuted in to coach the All Blacks after Ian Foster’s COVID-19 positive.

1hr 5 mins from kickoff: Hello and welcome to The Sporting News’ live coverage of the first Test between New Zealand and Ireland in Auckland

🎧 Can’t wait to run out in front of our home fans at Eden Park!

New Zealand’s plans for the upcoming games have been hit by a major COVID-19 disruption, with head coach Ian Foster testing positive alongside key stars David Havili and Jack Goodhue.

Foster expects to be back for the match but there was a further setback on Thursday when Greg Feek tested positive, with scrum coach Mike Cron drafted in. Akira Ioane is still struggling with a foot injury, but Leicester Fainga’anuku will make his debut.

Farrell has opted for experience running through his travelling squad to cope with the demands of three games inside two weeks in New Zealand.

Jonathan Sexton captains the side for the opening Test while Keith Earls wins his 97th cap. Andrew Porter returns after missing the final two games of the Six Nations through injury and there is also a start for Leinster hooker Dan Sheehan.

How to watch New Zealand vs. Ireland

USA/Canada/Australia: Streaming is available on Flo Rugby, which is available through the Flo Sports App and Roku, Fire TV, Chromecast & Apple TV.

Viewers in Australia can also subscribe to Stan Sport, which offers a free seven-day trial.