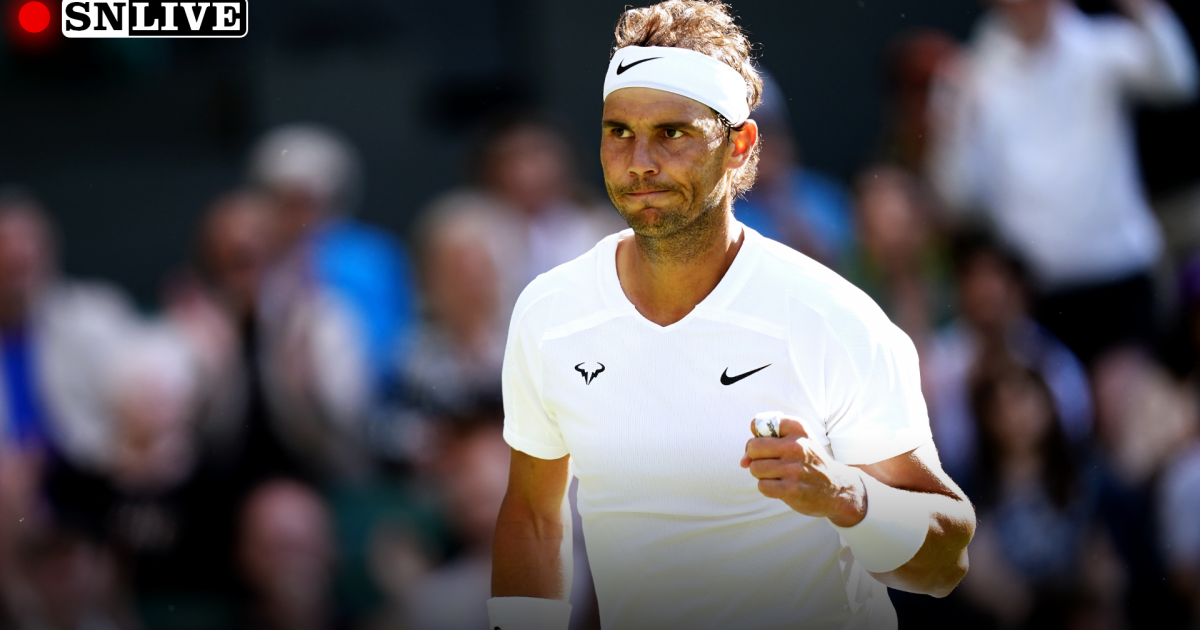 Rafael Nadal is back on Centre Court action again on Day Six of Wimbledon as he closes the order of play with a third-round clash against Italian Lorenzo Sonego.

The 22-time Grand Slam champion is yet to find his best form at the grass tournament this week that has seen him drop a set in both his wins over Francisco Cerundolo and Ricardas Berankis.

As for Sonego, he overcame American Denis Kudla in his opening match in a five-setter before upping the intensity and seeing off Hugo Gaston in straight sets in his most recent outing.

This is the first time Sonego and Nadal have played each other and the former will be hoping he can deliver one of the biggest upsets of the tournament so far to reach the fourth round of Wimbledon for only the second time in his career.

The Sporting News is on Centre Court to bring you live updates and highlights of the match below with players expected on court around 6 p.m. local time / 1 p.m. ET.

Rafael Nadal vs. Lorenzo Sonego updates and highlights from Wimbledon 2022

An ace from Nadal gets him to 30-0. Another to 40-0, Sonego isn’t even attempting to get near them. When he does, on the last point, Nadal is at the net to hit the volley. Nadal won’t need to change shirts because he’s barely broken a sweat here in the first 27 minutes of action.

Nadal gets two break points courtesy of sloppy forehands from his opponent. Nadal hits the first forehand long and then Sonego inexcusably double faults. He’ll serve for the opening set.

Nadal begins with a double fault and then Sonego attempts a cheeky drop shot but it doesn’t fall over his opponent’s side of the net, 15-15. Maybe Nadal has some nerves too… he double faults again. Sonego can’t capitalise as he hits a return into the net, 30-30. Nadal wins the next point but Sonego should have put it to bed having lobbed Nadal and then got back into a decent position only to hit his next forehand long. Nadal gets the hold.

Sonego challenges an out call on his forehand to avoid going 0-30 down but he’s unsuccessful. Nadal’s return is then a wayward one and Sonego gets a point back and he’s level when he repeats the serve down the middle, this time the return goes beyond the base line. Sonego curses to himself as he gifts Nadal break point with an overhit forehand. Nadal gets the break as a backhand from Sonego goes wide. That won’t do the No.27 seed’s confidence much good.

Nadal starts with a lovely serve and volley combination. A Sonego error coupled with two controlled backhand volleys gets the Spaniard a comfortable hold. All straight forward stuff so far.

Sonego drills his first ace to get to 30-0 before Nadal smashes a forehand return winner across court. Sonego is just finding his feet with his serve and that helps him get to 40-15. Sonego lures Nadal in with a drop shot, which he makes, but the Italian fires the volley into empty space to hold.

Nadal gets the first point of the match as Sonego hits a return into the net. Fans don’t have to wait long to see a textbook forehand from Nadal as he drills one down the line, 30-0. Two more big serves and Nadal is up and running.

6.35pm: Both players come out to huge cheers, of course there’s plenty of Rafa fans on court hoping for a Spanish masterclass over the coming hours. It won’t be long until we’re underway!

The two-time champion takes on Lorenzo Sonego for a place in the Round of 16#Wimbledon | #CentreCourt100 pic.twitter.com/dIhi2Xt8s4

6.20pm: Paula Badosa has beaten Petra Kvitova in straight sets, 7-5 7-6, so it won’t be long until Nadal and Sonego take to the court.

5.45pm: Upset alert! World No.1 Iga Swiatek is OUT of Wimbledon and her incredible 37-match unbeaten streak has come to an end. She suffered a 4-6 2-6 defeat to Alize Cornet in the third round over on No.1 Court.

5.15pm: Nadal and Sonego are the final match of the day on Centre Court. They’ll be on court following the conclusion of Paula Badosa and Petra Kvitova’s match. The Spaniard has just beaten the two-time Wimbledon champion 7-5 to take the first set.

5pm: Hello, and welcome to The Sporting News’ live coverage of Rafael Nadal’s third-round clash against Lorenzo Sonego. It still feels like we’re waiting to see the Spaniard unleash his full potential at SW19 this week and standing in his way today is the world No.54, who has been playing some brilliant tennis this week.