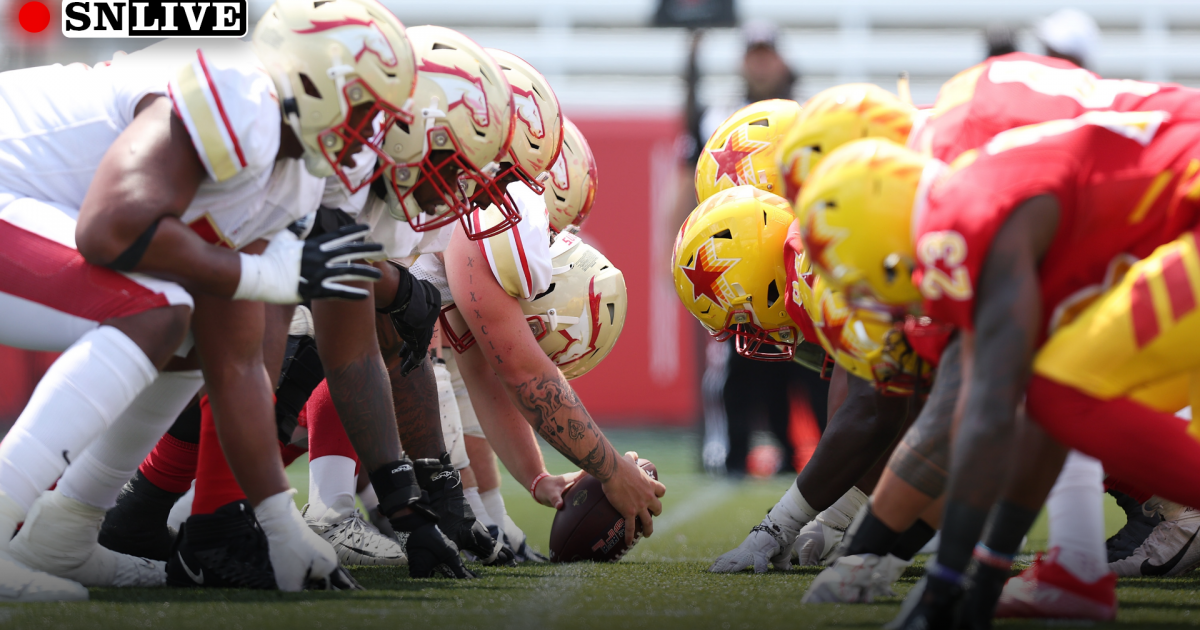 The Birmingham Stallions have been considered the best team in the USFL for most of the league’s inaugural season. They will have a chance to prove that once and for all on Sunday.

The Stallions are facing the Philadelphia Stars in the 2022 USFL championship game at the Pro Football Hall of Fame in Canton, Ohio. The contest is a rematch of a Week 5 meeting that the Stallions won 30-17, but they will face a stiffer test from a Philadelphia team that has found its stride in recent weeks.

The Stars have one of the USFL’s most explosive offenses headlined by quarterback Case Cookus. Philadelphia averaged a league-high 26.2 points per game during the regular season while Cookus threw the second-most touchdown passes in the league (12) despite making just seven starts.

Cookus and the Stars will be without their top running back, Matt Colburn II, so Philadelphia will certainly rely heavily on their passing game to carry their offense. Meanwhile, on defense, the Stars will need their run defense to play as well as it did in their playoff win over the Generals; the team’s typically strong pass rush and secondary play — headlined by cornerback Channing Stribling — also must put forward a solid effort against Birmingham.

The Stallions have one of the most balanced teams in the USFL. Their defense — led by star linebacker DeMarquis Gates — could make it difficult for Cookus to move the ball, especially if they can eliminate the threat of a running game. As for the offense, the highly efficient attack is led by quarterback J’Mar Smith, who is in his sixth year with coach Skip Holtz. He will be able to distribute the ball accurately to his receivers and will help to open up running lanes for the likes of Bo Scarbrough.

Birmingham is expected to beat Philadelphia, but the Stars upset the Generals and snapped their nine-game winning streak last weekend. Can the Stars do it again?

The Sporting News is tracking live scoring updates and highlights from Stars vs. Stallions on Sunday. Follow along for the latest highlights, updates and results from the 2022 USFL championship game.

MORE: Cookus, Scarbrough among USFL players who could make NFL rosters in ’22

7:41 p.m. — The Stars win the coin toss and they will receive. Brandon Aubrey and the Stallions will kick off to start the game.

7:38 p.m. — The national anthem just wrapped up, which means the game will begin in short order.

7:33 p.m. — The Stars and Stallions have both come onto the field in front of a solid crowd at Tom Benson Hall of Fame Stadium. The Stars are wearing their red uniforms while the Stallions will be decked out in white.

7:27 p.m. — J’Mar Smith was 3-0 as a bowl game starter for Skip Holtz at Louisiana Tech. Can they translate that success to the USFL level?

7:20 p.m. — Stars safety Ahmad Dixon was a big playmaker in Philadelphia’s win over New Jersey last week. Here he is getting loose as he looks to do the same against the Stallions.

7:17 p.m. — ”Let’s have some fun!” Skip Holtz is bringing a lighthearted attitude into the USFL championship game.

Coach Holtz firing us up before game time 😤🐎 pic.twitter.com/oKcnrSce5w

7:11 p.m. — J’Mar Smith is set to start for the Stallions tonight as he has in almost every game since taking over for Alex McGough in Week 1 of the USFL season. He recently spoke to The Sporting News about how his relationship with Birmingham coach Skip Holtz, who coached Smith for six years at Louisiana Tech, has helped turn the Stallions into one of the league’s best teams.

7:05 p.m. — Matt Colburn II might not be playing for the Stars tonight because of an injury, but he did take home some hardware recently. The Philadelphia running back was named the USFL’s Sportsman of the Year while at the Pro Football Hall of Fame.

6:52 p.m. — Case Cookus has been one of the USFL’s most explosive quarterbacks during its inaugural season. The former Northern Arizona star recently spoke to The Sporting News about his journey to the USFL after stops with four NFL squads and a CFL team over the last two seasons.

6:45 p.m. — Looks like the USFL might get a solid crowd in Canton tonight. There are plenty of fans already in the stadium while others are lined up waiting to get in to see the Stars play the Stallions.

The line to get into the USFL Championship wraps around the entire Hall of Fame building 🤯🔜🏆@USFLStars x @USFLStallions pic.twitter.com/Zdzv3IwzHq

What channel is Stars vs. Stallions on today?

Curt Menefee and Joel Klatt have served as Fox’s No. 1 broadcast team during the USFL regular season and called the Generals vs. Stars playoff game last week. They are expected to team up again for Stars vs. Stallions matchup.

Cord cutters will be able to watch Sunday’s game with fuboTV, which provides access to all of the USFL playoff games in 2022 and comes with a free trial.

I Came By
Manti Te’o Netflix documentary: Release date, trailer for ‘The Girlfriend who Didn’t Exist’
Days of Our Lives Round Table Week of 8-08-22: Are You Team JEric or Team Ericole?
Little League World Series scores 2022: Updated bracket, results, how to watch LLWS games live
A League of Their Own – Season 1 – Review