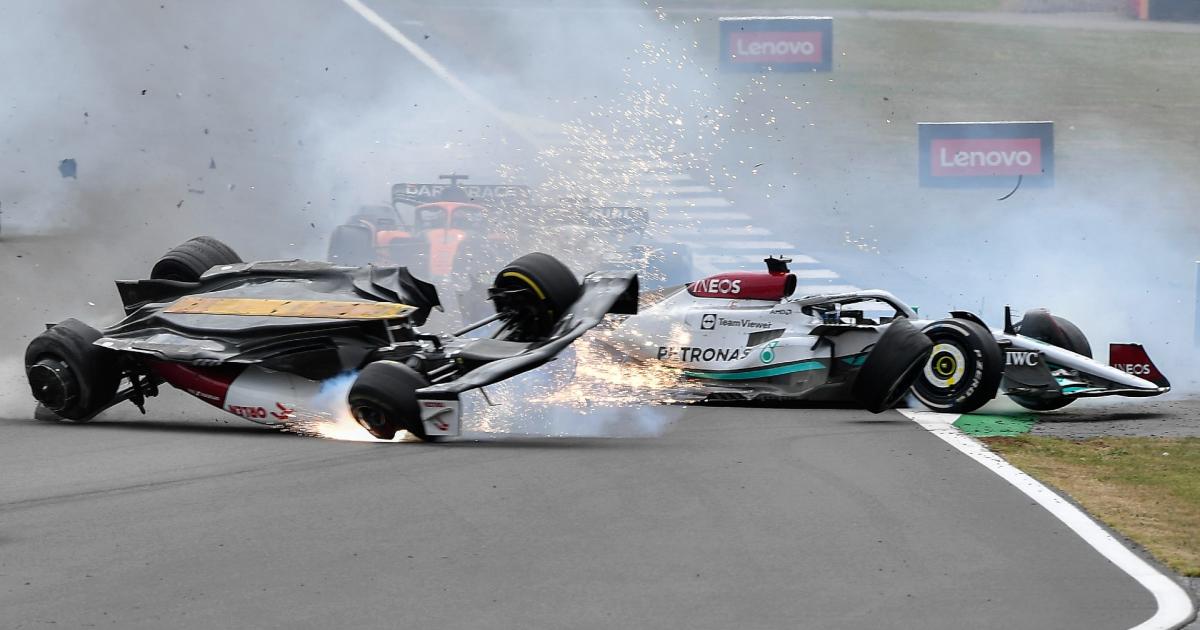 The British Grand Prix got off to a scary start on Sunday. There were multiple collisions on the first lap of the race, and the wreck that resulted from those collisions left Zhou Guanyu in danger.

Zhou’s Alfa Romeo was struck from the left by George Russell’s Mercedes. Russell had been contacted by Pierre Gasly on his left side and lost control while flying into Zhou’s racecar.

The crash caused Zhou’s car to roll over and spin like a top on the track. The car then traveled over the tire barriers at the first turn, as you can see below.

A red flag was waved immediately after the crash. Zhou was treated by emergency crews — along with Alex Albon, who also was involved in the wreck — and taken to Coventry Hospital.

Incredibly, he came out of it unharmed. He announced that he was “all clear” on social media before being released from the hospital later that day.

I’m ok, all clear. Halo saved me today. Thanks everyone for your kind messages! pic.twitter.com/OylxoJC4M0

As Zhou mentioned, the halo helped to protect him during the crash and was instrumental in keeping him safe during the scary wreck. What is the halo and how did it help Zhou? Here’s what to know about it.

The halo is a device used to protect drivers who race in open-wheel racing series. It is comprised of a curved bar placed above the cockpit of the vehicle to protect the racer’s head.

Below is an example of what the halo looks like protecting the cockpit on an F1 car.

When was the halo added to F1 cars?

The FIA, a motorsports governing body, mandated that cars contain halos in Formula 1 races beginning in the 2018 season. The measure was originally met with criticism from fans of the sport and its drivers, too.

“Personally I wouldn’t change anything,” Max Verstappen said when asked about the halo in March of 2018. “I would have left it how it was last year. That is what Formula 1 is, and that is the DNA of the sport, and I think they are abusing it a bit.”

However, drivers eventually warmed up to the idea as the measure has proven effective at mitigating injuries in the sport’s bigger crashes. We saw that firsthand during Guanyu’s crash on Sunday.

MORE: Who are the protesters at the British Grand Prix?

Plenty of F1 fans, drivers and media personalities reacted to Zhou’s crash on Sunday. Some in the stands captured varying angles of his wreck and all were thankful that Zhou came away from the crash OK, including Formula 1 itself.

Today was a reminder that F1 remains a high-speed, high-risk sport that is always right on the edge.

We are so thankful to the advances in safety that mean both Zhou Guanyu and Alex Albon are safe and well. pic.twitter.com/BJ8PPDG2av

What a horrible crash hope @ZhouGuanyu24 is ok pic.twitter.com/C08WY06tCi

Insane how far safety has come in this sport, incredibly lucky escape for @ZhouGuanyu24

This was horrendous. The Halo saved Zhou Guanyu’s life today. So so thankful to see everyone walk away virtually unscathed! @SilverstoneUK pic.twitter.com/YoVjmIKykB

Still gives me chills @ZhouGuanyu24 @alfaromeoorlen Thank God. Thanks for the Halo. pic.twitter.com/WvpR9NNtRK

Even Albon, who like Zhou was treated medically after the crash, posted to social media to express his elation that his fellow driver was OK.

All ok, the pets are ok 😅 but more importantly I’m glad @ZhouGuanyu24 is ok! Thank you to the medical staff and for all the messages. Eyes already on Austria 👊 pic.twitter.com/15PI86Iooz

MORE: Which F1 driver has the most wins in the sport’s history?

Russell was concerned for Zhou immediately after seeing his wreck, and once the red flag waved, he sprang into action.

Russell left his Mercedes once the other drivers had stopped to go check on Zhou. He wanted to see if there was anything he could do to help Zhou after the crash, and that action earned him near-universal praise.

George Russell left his Mercedes car straight after the red flag to check on Zhou Guanyu.

Russell was not allowed to restart the race

Because he left his car while on the track, Russell was not allowed to restart the race. He didn’t mind, however, as his No. 1 concern at the time was Zhou’s health.

First of all, the most important thing is that Zhou is ok. That was a scary incident and all credit to the marshals and medical team for their quick response.

Obviously gutted to end the race this way and I’m sorry for the team and the fans. Cheering LH on from the garage. 👊

Russell also noted that F1 should examine the space between the tire barriers where Zhou crashed, as it took a while for rescue crews to be able to get him out of the car.