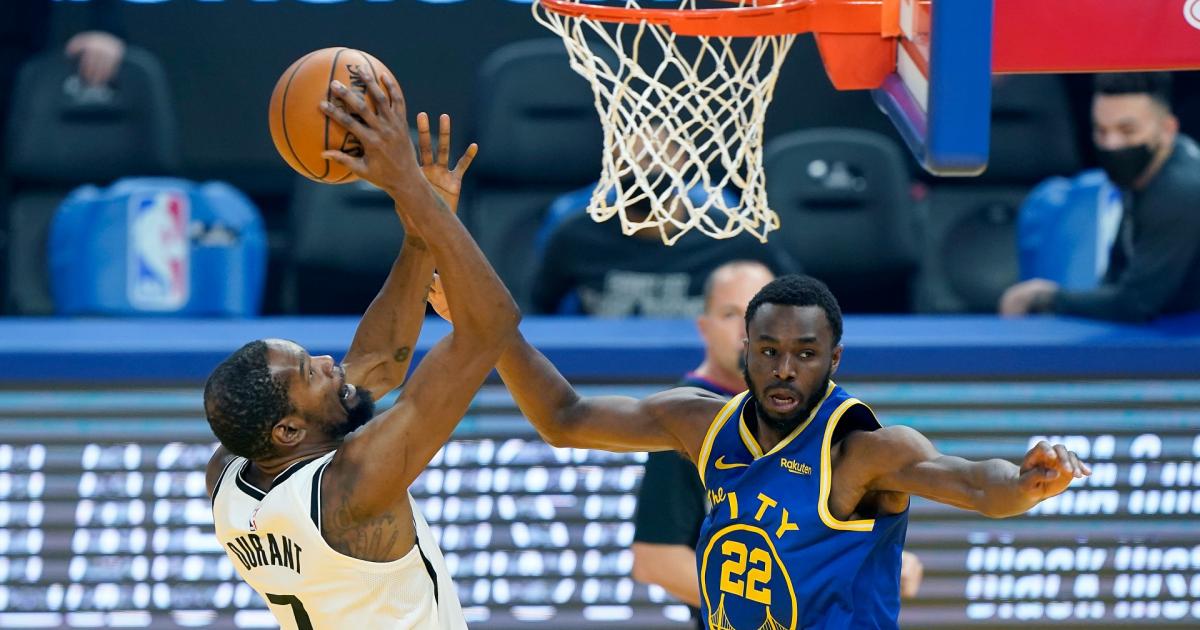 Cue up “Reunited” by Peaches & Herb because Kevin Durant could be heading back to the Golden State Warriors.

MORE: When do the Warriors play in NBA Summer League?

According to Marc Spears of Andscape, the Warriors could hypothetically put together a trade package of Jordan Poole, Jonathan Kuminga, Andrew Wiggins and James Wiseman in exchange for Kevin Durant. Spears notes that this package could potentially be the best one available for the Brooklyn Nets as it gives them young, up-and-coming players plus an All-Star in Wiggins.

Would the Warriors trade for Durant?

Spears believes that the Warriors could and would possibly trade for Durant.

“The one team I’m telling you guys to keep an eye on is the Golden State Warriors,” Spears said during a recent appearance on ESPN Radio. “Golden State could have the best package for both parties. Jordan Poole, Jonathan Kuminga, All-Star Andrew Wiggins, the former No. 2 pick James Wiseman. What the Nets want is a young All-Star and want perhaps a future All-Star. They’re all under 30. They also want picks, maybe the ability to swap picks. But if you can get those four players, if I’m the Nets, I’m very, very happy.”

Could @KDTrey5 really be headed back to the @Warriors? @MarcJSpears tells @MedcalfByESPN and @gneitzel16 that it’s a distinct possibility. pic.twitter.com/ziwnqtJOEA

“For Kevin Durant, the Warriors — they’re very familiar with [Durant] and vice versa,” Spears continued. “He knows where to live in San Francisco. He knows how the offense works. He knows he can win a championship there. Yeah, Steve Kerr would probably have to figure some things out. But with each passing day that this carries on, I’ve heard the Warriors have interest in terms of a young haul, in terms of people being happy on both sides. To me, the Golden State option is the best option.”

Will James Wiseman, Jordan Poole or Andrew Wiggins be traded?

It is important to note that Spears is only hypothesizing.

He is not actually reporting that the Warriors talked to the Nets about this trade or that Wiseman, Poole or Wiggins were even mentioned in discussions because well, they haven’t reportedly been any actual conversations.

Instead, Spears is just offering a potential trade that could work for Durant, the Nets and the Warriors.

But while Spears believes Durant, Draymond Green, Stephen Curry, Klay Thompson and Steve Kerr would be into a reunion, the Sporting News’ Stephen Noh begs to differ.

“That package is maybe the best one out there for Durant, and the Nets would probably bite on it,” Noh writes. “But the Warriors probably wouldn’t be interested. Durant definitely wouldn’t be. Barring a series of marathon therapy sessions between everyone involved, it’s not happening.”

But one thing is quite clear, if Durant actually gets traded back to the Warriors, Drake’s “Back to Back” may be a more appropriate choice than “Reunited.”