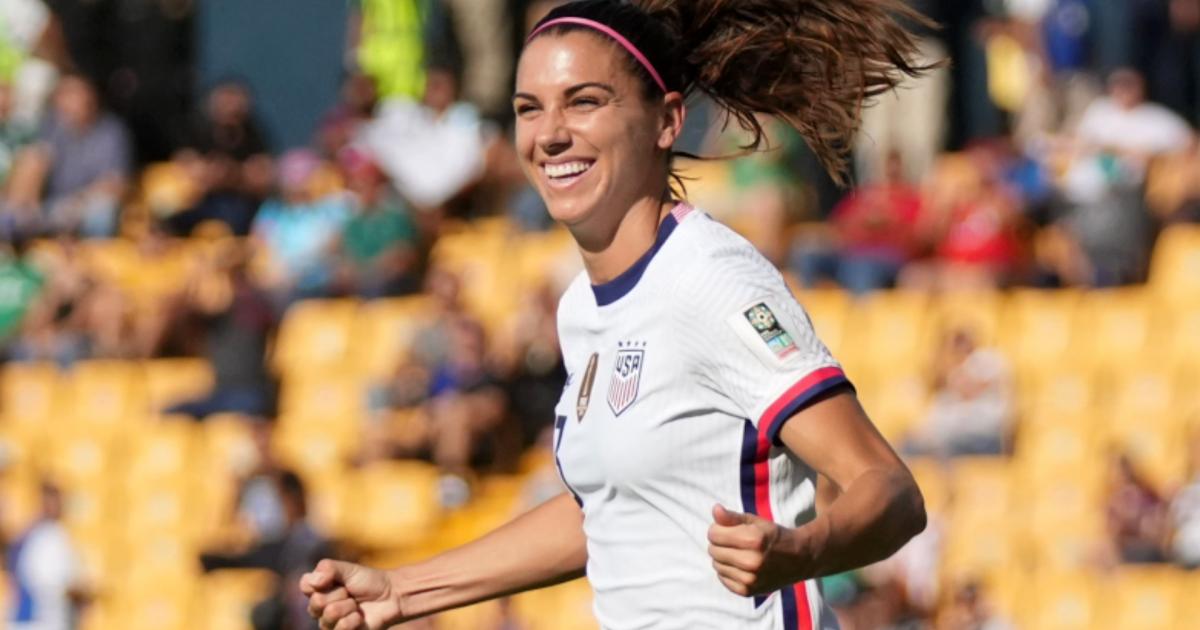 The USWNT got off to a winning start to kick off its qualification campaign for the 2023 World Cup and 2024 Olympics, registering a 3-0 win against Haiti to open the regional CONCACAF W Championship. But it was a lot closer than anyone expected, and it’s a clear sign that this qualifying tournament won’t be a cakewalk.

Alex Morgan, starting at center forward, applied two world-class finishes to put the USWNT up 2-0 by the 23rd minute. That’s when Haiti took over control of the game and created a handful of clear-cut chances, including a penalty kick just before halftime, but the Haitians failed to break through.

U.S. goalkeeper Casey Murphy, who was a surprise starter ahead of veteran Alyssa Naeher, came up with a massive stop in the 37th minute in a 1-on-1 opportunity after Melchie Dumornay burned the U.S. backline. Then on another 1-on-1 play shortly after, Haiti earned a penalty, but Roselord Borgella slammed her attempt against the post with the goalkeeper beat.

“[It was important] to get in front early against a really athletic team, a team that as the game wears on if you don’t get one early, it could be more of a physical match,” Morgan said postgame. “I was happy to get on the scoresheet early.”

In the wake of the missed penalty, Borgella was at the center of a controversial play when she raked the side of U.S. defender Kelley O’Hara and received a straight red card, But the referee had a look at the play on the monitor and switched her decision from a red to a yellow card.

The U.S. was unlucky not to add to its 2-0 lead throughout the second half, only finding its third through substitute Midge Purce with six minutes remaining. Purce was denied twice prior to the goal: an offside infraction spotted by the VAR cancelled one goal, and then Haiti’s ‘keeper came up big on a 1-on-1 chance. Mal Pugh thought she had a clear penalty earlier, but the VAR also spotted an offside in the buildup to that incident.

The USWNT will next face Jamaica on Thursday, July 7 with a chance to potentially lock up a top two spot in Group A and seal a ticket to the 2023 FIFA World Cup. It will hope to finish top of the group for the theoretically easier semifinal matchup, since it needs to win the tournament to clinch a direct ticket to the 2024 Olympics.

84th min.: Goal USA! Midge Purce gets her goal! She’s in great position to collect a short clearance in the box and she has time to take a touch and fire home past the Haiti ‘keeper. The win for the USWNT is now secure.

80th min.: Purce chance! She tries to get the goal back and she’s 1-on-1 with Haiti goalkeeper Lara Larco, but Larco comes off her line to stuff the shot.

77th min.: Goal scratched for the USA! Megan Rapinoe serves up a ball to Midge Purce at the opposite right post and Purce touches it past the ‘keeper. But the VAR signals an offside on the ball touched to Rapinoe on the left. No goal.

74th min.: SUB USA — And there’s the final USWNT sub. Megan Rapinoe in for Mal Pugh on the left side of the attack.

68th min.: SUBS USA — Kristie Mewis and Sofia Huerta are on for Lindsey Horan and Kelley O’Hara. The Americans have made four of five allowable subs.

62nd min.: SUB USA — Ashley Sanchez came in for Rose Lavelle in midfield at the hour mark and was immediately dangerous with a diagonal that went just wide of the far post. It’s that movement into the box that Lavelle was unable to provide.

60th min.: No penalty! The VAR shows that Pugh was actually offside, negating the foul which would likely have been ruled a penalty.

58th min.: Penalty for USA? Mal Pugh goes down in the box as Haiti’s Jennyfer Limage clatters into her from behind. No immediate penalty call from the referee, but the VAR is looking at it.

Mallory Pugh is taken down in the box but VAR rules she was offsides prior. 👀 pic.twitter.com/fP8QQt4Obz

53rd min.: It’s an even start to this second half. Both teams getting their moments. The USWNT might regret not capitalizing on an earlier gift from the Haitians as Mal Pugh sent the ball right at the ‘keeper.

48th min.: Alex Morgan scores but it’s offside! Replays show she was ahead of the last defender when the ball was launched by Becky Sauerbrunn. The ‘keeper couldn’t handle the finish, but it’s waved off.

46th min.: SUB USA — The second half starts with a sub for the USA as Midge Purce comes on to replace Sophia Smith.

Halftime: The USWNT are up by a comfortable score, but the match has been a lot closer than the scoreline looks (6-5 on shots). Up 2-0 by the 23rd minute, thanks to two sensational finishes by Alex Morgan, the USA then seemed to take its foot off the pedal and ceded the initiative to Haiti, which owned the final 15-20 minutes.

The Haitians are lucky to still have 11 players on the field to start the second half, but they deserved a goal from that first half. Haiti hit the base of the post, they had a big chance that was stopped by Casey Murphy, and they had a penalty kick that slammed against the post with the ‘keeper beat. They will be dangerous in the second half. This game is not over.

47th min.: And after video review the referee takes away the red card and instead shows Borgella the yellow. Was it a clear and obvious mistake by the referee? Objectively speaking, it wasn’t. But Borgella’s bent knee might have been a consideration.

45th min.: Red card to Haiti! It’s Borgella who is sent off for sending her studs into Kelley O’Hara and raking the player’s side. But now the referee is going to take a second look at it.

Red card called against Borgella, who took some spikes to O’Hara’s shoulder.

42nd min.: Roselord Borgella takes the kick and the ball goes off the left post! She had U.S. ‘keeper Casey Murphy beat, and the ball bounces back to Borgella but she can’t make a play on it.

40th min.: Penalty for Haiti! Emily Fox lunges in the box to bring down Nerilia Mondesir. It’s a clear penalty and the referee points to the spot.

37th min.: What a chance for Haiti! Melchie Dumornay ran right through the middle of the U.S. backline and was 1-on-1 against goalkeeper Casey Murphy, who comes up with a crucial stop. Murphy did well to come off her line to deflect Dumornay’s attempt.

A huge save from Casey Murphy. 🧤 pic.twitter.com/3C9pjGe7zc

36th min.: Period of sustained pressure by Haiti, who have slowly moved upfield. Their backline has moved into the center circle. It could present some opportunities to run in behind for the USWNT.

23rd min.: It’s Alex Morgan again! A cross from Kelley O’Hara on the right is met with a snap header by Morgan and it’s a perfect execution, tucking the ball under the crossbar. The Americans are cruising now.

She is on fire!

Alex Morgan has her second of the day. 💫 pic.twitter.com/L5dgS2r4w4

16th min.: Goal USA! What a touch by Alex Morgan to sneak the ball past Larco at the near post. Morgan used the outside of the foot to apply the glancing touch on a Pugh cross and Larco was beaten near post.

Mallory Pugh finds Alex Morgan and she finishes with a cheeky flick. 🔥 pic.twitter.com/HAFJoGOZfJ

15th min.: It’s an interesting start to this match. The USWNT is holding possession, but Haiti does not look intimidated. The Haitian ‘keeper Lara Larco has been busy and had to come off her line to stop a ball over the top for Mal Pugh.

11th min.: USWNT hits the crossbar! Alex Morgan with the difficult header that slams the face of the bar after a Sophia Smith delivery from the right.

OFF THE WOODWORK FOR ALEX MORGAN. 😳

What an exciting first 10 minutes here in Monterrey. pic.twitter.com/pNd2lx8BzV

7th min.: Chance for Haiti! Kethna Louis has an open header in the box on a set piece delivery and it grazes the base of the right post. Close call for the USA!

3rd min.: The USWNT gets the first corner of the match, but Mal Pugh’s service is too strong for Alana Cook to head toward goal at the far post.

3 mins from kickoff: The stadium, known as El Volcan (The Volcano) is near empty. The Haitian anthem was followed by the U.S. anthm and we’re nearly set for kickoff.

6 mins from kickoff: Teams are getting ready to take the field. It’s 37-year-old Becky Sauerbrunn and 23-year-old Nerilia Mondesir lead their respective teams out to the middle of the field.

50 mins from kickoff: USWNT lineup is out. Casey Murphy starting in goal in place of Alyssa Naeher is the biggest surprise:

Well there was ONE change to the A rotation! Will this be the same squad that starts against Mexico?? Tune in later to see (I would bet yes) https://t.co/YB2k9itFYU pic.twitter.com/IbH68Ssnnr

60 mins from kickoff: Scenes from the stadium where the USWNT will be facing Haiti. It’s home to Liga MX and Liga MX Femenil clubs Tigres UANL:

90 mins from kickoff: Fox analyst and former USWNTer Aly Wagner explains why she thinks the USA will be the team that wins it all on July 18.

.@alywagner gives us her way-too-early pick to win the @ConcacafW Championship. 👀

Agree with her choice? 🇺🇸 pic.twitter.com/1NOV2eANqJ

120 mins from kickoff: You probably didn’t know there was an official song for the CONCACAF W Championship by Cedella Marley and Skip Marley (Bob Marley’s daughter and grandson).

It will be interesting to see how U.S. manager Vlatko Andonovski shuffles his lineup to keep his 23-player squad fresh with three group matches in seven days followed potentially by a single-elimination semifinal and final. There will also be pressure to finish atop Group A to avoid a potential semifinal showdown against Olympic champion Canada.

North Carolina Courage 26-year-old goalkeeper Casey Murphy is named the starter for the opening match over 34-year-old veteran Alyssa Naeher. The rest of the lineup is arguably Andonovski’s best XI.

The Haitian side, coached by Frenchman Nicolas Delepine, includes 12 players who feature for clubs in France, including goal scorers Roselord Borgella and Batcheba Louis, and up-and-coming sensations Melchie Dumornay and Nerilia Mondesir, who have starred for Haiti in recent years at international youth tournaments. The team is coming off a 4-2 win and a 2-1 loss against Costa Rica in a pair of tuneup matches, and against the USWNT the same lineup is being fielded for the third straight match.

How to watch USWNT vs Haiti on TV, live stream

The USWNT’s opening match from Monterrey’s Estadio Universitario will be televised by CBS Sports Network in the United States. That network is streamed live on fuboTV, which offers a free trial.

Streaming platforms Paramount+ (English) and ViX (Spanish) will also carry the match in the USA.