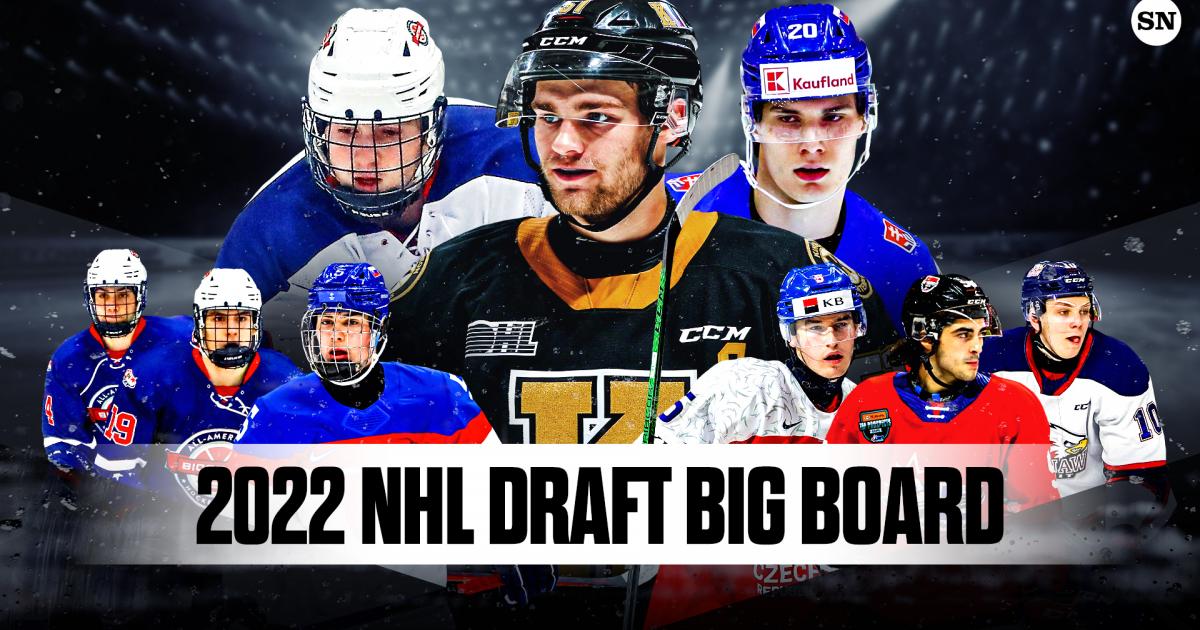 As the first big event of the offseason gets closer and closer, it’s time to learn about some of the top prospects who will be selected. Most hockey fans know the name Shane Wright, who has long been considered the No. 1 pick in the draft, but there are a plethora of other names to know for Day 1 of the draft.

Players have been going up and down in mock drafts and scouts’ final rankings. It’s no different at The Sporting News.

The long-time consensus No. 1 pick is a playmaking center with good size and the ability to excel in all three zones. The offensive output wasn’t what people expected this season, but the tools are there and I don’t see Wright not going No. 1.

If there’s anyone who may take the top spot from Wright, it’s Slafkovksy. The Slovakian winger is a power forward with slick hands and great release who may have the highest upside of any draftee.

Cooley is arguably the best two-way center in this year’s draft. He’s smaller, but he makes up for that with his decision-making. He’s by far the top American prospect in this class and is one of the safer picks.

Nemec is a steady blue-liner with the ability to contribute on both ends. But the Slovakian’s offense is what pops. He’s a fluid skater and has great on-ice vision.

Jiricek began to slide in mock drafts after suffering a bad leg injury at the World Juniors, but his performance at the World Championship kept him right where he should be. He’s a big, all-around defender who likes to play physically.

Perhaps the most prolific scorer in the draft, Savoie is a fringe top-five candidate. There’s no denying his goal-scoring ability. His speed-shot combination makes him dangerous whenever he’s in the offensive zone. He played center with Winnipeg but there are rumblings that NHL clubs feel he’d be better suited for wing.

Lekkerimäki is a natural goal scorer with a deceptive release and a knack for finding scoring areas. He can utilize a snap shot, wrist shot, one-timer or backhand extremely effectively. Lekkerimäki isn’t afraid to get in on the forecheck despite his size.

There’s a lot to like about Kemell. He has an extremely active stick in both ends and strong puck-handling ability. His release makes him an excellent weapon on the power play. Kemell’s ability to draw penalties is a plus as well.

Gauthier is as complete a player as you will find in this draft. He plays a strong 200-foot game, and with his frame, he is great along the wall in puck battles. He flew under the radar on the NTDP team, overlooked at times behind Cooley and Frank Nazar, but his stock continues to rise at the right time.

Korchinski is a premier two-way threat who loves to have the puck on his stick and bring it up the ice with his superb skating ability. He struggled to score last regular season but then broke out in the playoffs, which raised scouts’ eyebrows. He has improved in his own zone and shown that there is more than one dimension to his game.

Mintyukov is a two-way weapon on the blue line. His skating and poise with the puck allow him to jump up into the play and create chances off the rush. His offensive game has greatly improved since coming to North America.

The Austrian forward is a very intelligent player. Kasper doesn’t have flashy dekes or an insanely hard shot, so don’t expect him to fill up a scoresheet. He is big, strong and consistent, however. He drives to the net with the puck to create opportunities in the offensive zone, and he never shies away from the chance to lay a big hit. But what stands out most about Kasper is his fluid skating.

Yurov plays hard and fast and comes with an excellent, well-rounded skill set. The talent is there, but he had an extremely sheltered role in the KHL. There are also still concerns about whether Russian prospects will be allowed to come to North America, but Yurov is worth the gamble.

Geekie is an imposing figure on offense. His size makes him tough to play against along the wall. But while he’s built like a power forward, his style more emulates a playmaker. He has displayed a soft touch with the puck.

No player in this draft is more polarizing than Lambert. When watching him play, he’s fast and slick and looks like a constant threat on offense. But the numbers weren’t there this past season and there have been questions about his attitude. He’s the top candidate to free fall in the draft, but he’s a first-round talent based purely on the eye test.

Nazar is so creative with the puck; his ability to find teammates and create scoring chances is uncanny. He stood out on a U18 team loaded with talent. Nazar is mainly a distributor, but his scoring ability can’t be disregarded.

Öhgren’s an extremely well-rounded player with a great toolkit. He already boasts NHL size. He is a solid facilitator and a dangerous shooter on offense and an intelligent player on defense

Once a candidate for the top 10, Miroschnichenko carries concerns after being diagnosed with Hodgkin’s lymphoma. Despite being cleared for practice, there is still speculation about him. Miroschnichenko is a terrific skater and shooter with plenty of offensive upside.

Howard is an offensive weapon with a lethal shot and a knack for finding a way into prime scoring areas. He has progressed to being more of a playmaker as well, showing an ability to find open teammates through tough passing lanes. His defense is rounding out.

Mateychuk can eat up minutes on the back end. He possesses good vision that he uses on the breakout to get the puck up ice. Mateychuk is a more undersized defenseman, but he uses his stick well to break up passes in his own zone.

Kulich has a knack for getting himself into open areas to make a quick pass or shoot when he’s in the offensive zone. His speed makes him dangerous with or without the puck. He doesn’t shy away from attacking the opposition 1 on 1.

Pickering can’t be missed on the ice with his height. He plays a physical game while also jumping up in the play. He’s extremely mobile for his size, and he has better vision than most blue-liners his age.

Östlund is a reliable, two-way center. He’s quick and plays with intensity; he constantly races for loose pucks along the wall. He definitely needs to fill out, but he has that great motor.

Mesar, the third Slovakian projected to go in the first round, can flat-out fly with the puck through the neutral zone. He isn’t receiving the recognition he deserves because of the league he plays in and his size, but he’s like a water bug shifting through defenders with the puck.

Among defensive defensemen in the draft, there may not be one better than Bichsel. The Swiss defender towers over everyone. He plays physical, throwback style on the blue line.

Snuggerud might not get as much shine as some of his U18 teammates, but he is still one heck of a player. His shot stands out the most. The future University of Minnesota forward can get a shot off from multiple angles and find ways to get the puck into the back of the net.

Chesley was touted as being a strong defender who likes to jump up in the play, yet the results on offense weren’t there at first. He finally started getting on the scoresheet in the back half of the season. In his own zone, Chesley can close gaps, play hard in the corners and be trusted not to cough the puck up.

A responsible, two-way center — that’s what Gaucher brings. He shuts down opponents’ top lines with his frame and competitive game. He can make the occasional skill play on offense, but it’s his defense that shines.

McGroarty is a hard-nosed, physical center who plays with intensity. While there are some questions about his skating, there are none about his other assets, such as his IQ, passing and scoring ability. The shot stands out above all; McGroarty is able to load up and find the back of the net with ease.

Despite being one of the smallest defensemen in the draft class, Hutson has emerged as a potential first-round candidate. He is impressively mobile, and his precision passing and high work ethic help him overcome his size. Hutson is a well-rounded player; he uses his stick well to defend and can contribute on offense.

Beck has an extremely high hockey sense. He’s able to calculate his next move and get ahead of opponents. His anticipation without the puck allows him to get into open areas. While Beck owns just an average shot, his hands and skating are upper-echelon.

Luneau was the No. 1 overall pick in the 2020 QMJHL Draft by Gatineau. His stock took a hit after surgery last offseason. He’s a pass-first blue-liner who can quarterback a power play. He shows great patience with the puck; he’s willing to outwait an opponent to find an open passing lane.

Firkus can shoot it, pass it and possess it, which makes him an intriguing option as both a scoring and playmaking threat. He’s listed at 5-10, but his weight is part of the reason he has not received more attention as a potential first-rounder.

Del Bel Belluz is a smooth skater with slick hands and a knack for making plays in the offensive zone. The defensive side is a work in progress, but there’s a lot of upside to his game. That makes him an outside candidate to be selected on Day 1.

Rinzel is the 2022 version of a high school player who has inserted himself into the top-50 conversation. He has a big frame and he broke out in his junior season. If Rinzel continues to develop, one team will be rewarded for gambling on him.

Odelius wasn’t projected to be a first-round pick heading into last season; then he played his way into the conversation. He was never known for his offense before breaking out for 30 points in 43 games in 2021-22. The Swede has brilliant skating and puck-handling ability.

Goyette can produce on offense; there’s no denying that. He is at his best with the puck on his stick thanks to his slick hands and playmaking ability. He has been held back by some scouts feeling that his ceiling isn’t as high as others.

Trikozov is bubbling with raw talent. He boasts a heavy, hard shot and excellent vision. The Russian winger also has a high hockey IQ and plays smart on both ends. The two-way game is still developing, but there’s a lot to like.

Hävelid is another skilled defender who can move the puck. He’s creative and is great with the man advantage. The Swede is small for a defenseman, but NHL teams have had success with shorter, puck-moving defensemen.

Perevalov seems to do everything well, but there isn’t one thing that stands out above other players in his class. He has a little bit of everything in his offensive tool belt and is reliable on defense.

Best of the rest

19 Shower Caddy Essentials You Need for Your Dorm
Warner Bros. Discovery Boss on Batgirl Cancellation: ‘We’re Not Going to Put a Movie Out Unless We Believe in It’
6 Chic Ways to Style Your Hoodie For Fall
What time is Michael Conlan vs. Miguel Marriaga today? Schedule, main card start time for 2022 boxing fight
Auburn QB T.J. Finley booked for ‘Attempt to Elude’ police: How traffic violation on a moped led to arrest