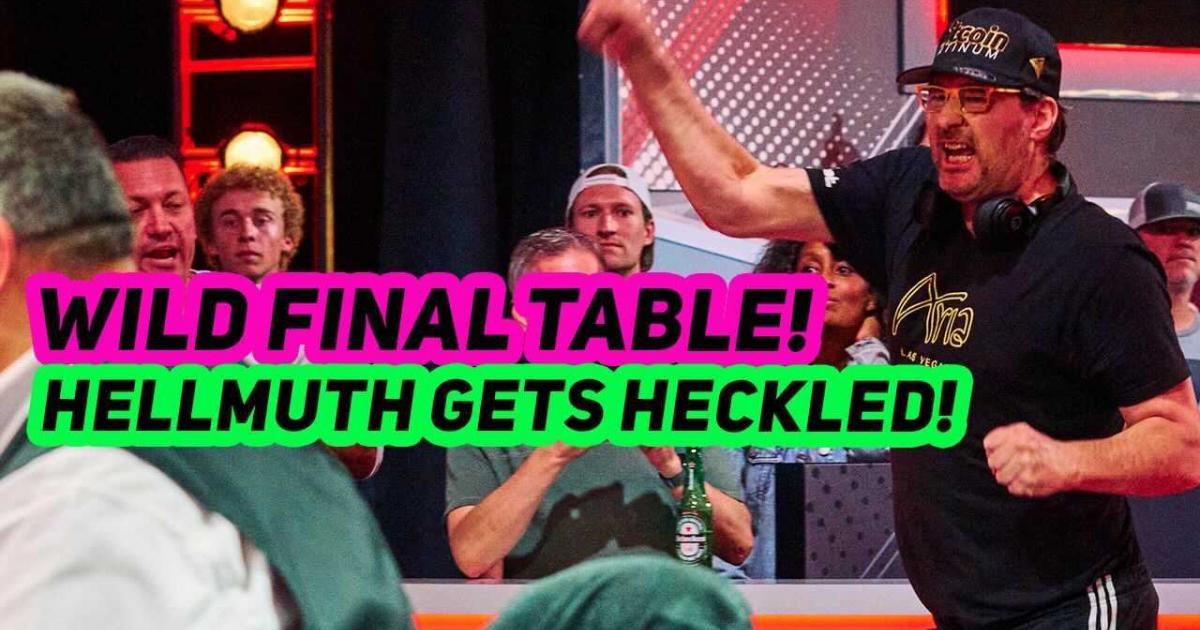 The 2022 World Series of Poker (WSOP) Main Event is now underway from Bally’s / Paris on the Las Vegas Strip with a massive field expected to compete in this year’s must-play poker tournament.

On the eve of the WSOP Main Event kicking off on Sunday, 16-time WSOP bracelet winner Phil Hellmuth was making a run at winning a record-extending 17th WSOP bracelet in Event #65: $3,000 No-Limit Hold’em Freezeout.

Event #65 attracted a total of 1,359 entrants, and heading into the final day, just 26 players remained with Hellmuth sitting fifth overall on the leaderboard. Once cards were in the air, the crowd slowly increased as Hellmuth inched closer to reaching his 70th WSOP final table with every elimination.

When the final ten players redrew to one table, Hellmuth was third in chips. Once the final seven players broke for dinner break, Hellmuth was the chip leader, and when there were just five remaining, they were relocated to the WSOP Main Stage to conclude the final table as part of Sporting News’ WSOP Final Table of the Week.

Hellmuth had slipped to second in chips, and immediately action begun with him being heckled by members of the rail. Hellmuth was fired up as railbirds were trying to get under his skin, but for Timothy Sullivan, he managed to block out the noise and find a double through Justin Saliba.

Sullivan wouldn’t last much longer as he fell in fifth place as Saliba exited in fourth place. Hellmuth sunk to the bottom of the leaderboard, but rebounded with two doubles through David Jackson. Jeffrey Lo would fall in third place to Jackson who entered heads-up play with more than a four-to-one chip advantage over Hellmuth.

Jackson was chasing his second WSOP bracelet, but Hellmuth was eyeing an unprecedented 17th WSOP bracelet – and his 10th in No-Limit Hold’em alone.

Hellmuth closed the gap to nearly even when he was dealt pocket aces and picked off a river-bluff from Jackson. However, Hellmuth dropped back down the chip counts before the final hand saw him all-in with ace-seven against the king-jack of Jackson. Jackson went runner-runner to make a straight to claim WSOP gold and $598,173 in prize money in Event #65. Hellmuth would have to settle for second place – the 14th time he has finished runner-up in a WSOP event – but would take home $369,698 in prize money to soften the blow of defeat.

PokerGO is the exclusive home to watch live coverage of the World Series of Poker. PokerGO is available worldwide on Android phone, Android tablet, iPhone, iPad, Apple TV, Roku, and Amazon Fire TV. You can also stream PokerGO on any web or mobile browser by going to PokerGO.com.

PokerGO is a subscription service with monthly, quarterly, and annual plans available. For a limited time, poker fans can sign up for an annual PokerGO subscription using the promo code “WSOP22TSN” to receive $30 off the annual price and get all access for less than $6 per month.