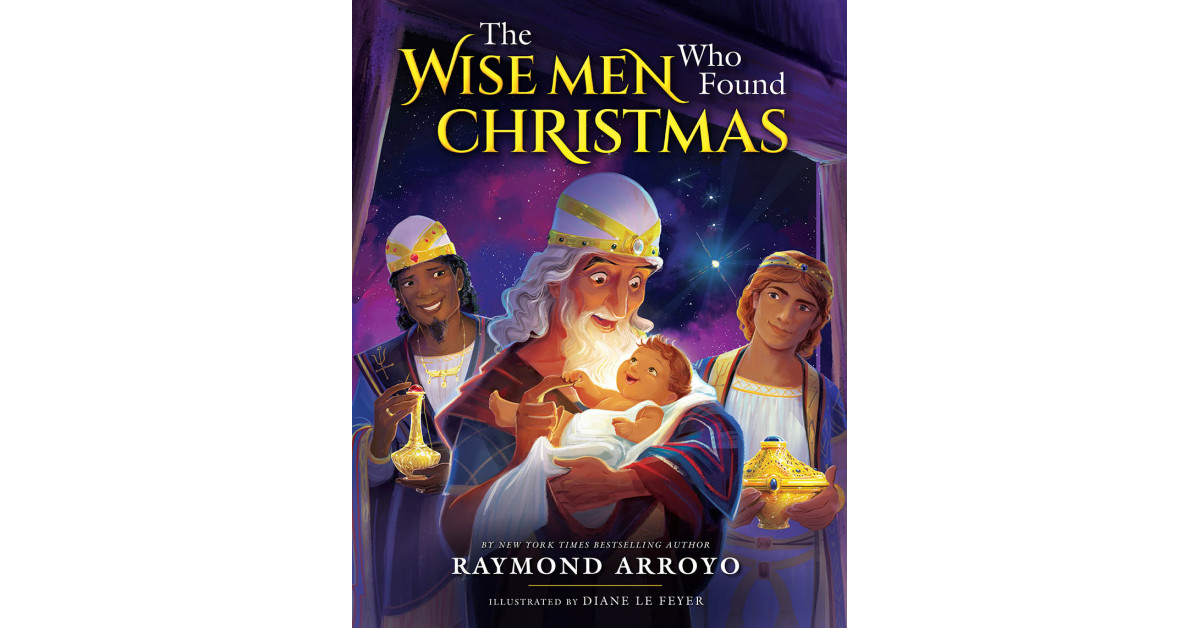 
BOSTON, July 28, 2022 (Newswire.com)
–
“This moving book shines like the Christmas star. Raymond Arroyo reveals the true and inspiring adventure of the Magi who bravely followed the light given them and found a treasure beyond imagining. This is a journey you and your family would be wise to take.” – Jim Caviezel, Award-Winning actor, “The Passion of the Christ,” “Person of Interest”

One of the most highly-anticipated offerings of the 2022 holiday season, The Wise Men Who Found Christmas is an exquisite picture book slated for release on October 11 and now available for preorder here.

Created by New York Times bestselling author and award-winning broadcaster Raymond Arroyo (with illustrations by award-winning artist Diane Le Feyer), the book cuts through layers of myth to reveal the true story of the Magi from the East. It is already an anticipated bestseller at Amazon and Barnes & Noble.

They were not three kings. Nor were they from the Far East, or even Persia …

In this enchanting visual adventure capturing the wonder of the holiday season, Arroyo shares the hidden story of the mysterious Magi from Arabia, who risked everything to discover the truth. Based on fresh historical evidence, The Wise Men Who Found Christmas is the miraculous, untold tale of three seekers who followed a star and found themselves in the middle of the greatest story ever told. Stunningly illustrated by Diane Le Feyer, this inspiring family keepsake will deepen your holiday tradition and remind you that chasing truth is often the greatest adventure of all.

The Wise Men Who Found Christmas is part of Arroyo’s larger “Legend Series” of standalone stories, including the New York Times bestselling The Spider Who Saved Christmas.

Raymond Arroyo is a New York Times bestselling author, an award-winning international broadcaster, host and managing editor of The World Over Live on EWTN, and a Fox News Contributor who has worked for CNN, MSNBC and the Associated Press. Mr. Arroyo has made frequent appearances on The Ingraham Angle, The Today Show, Good Morning America, CN Headline News, Access Hollywood, and many more. His work has appeared in the Wall Street Journal, The Financial Times, Newsweek, Time Magazine, The New Yorker, and elsewhere. Arroyo earned a Telly Award for producing, writing and hosting a musical Christmas special for PBS called Christmastime in New Orleans with an eponymous Billboard chart-topping soundtrack (Verve Records/AimHigher). He has produced other Billboard-topping musical projects including The Birth of Christ with Liam Neeson (Sony Classics). His eight books, including The Spider Who Saved Christmas, his biography of Mother Angelica, and his bestselling multi-book Will Wilder Middle Grade series (Random House) were all New York Times bestsellers. Known for his penetrating interviews, Arroyo has interviewed the leading figures of the day. Highlights include: Mother Teresa of Calcutta, Mel Gibson, Wendell Pierce, Placido Domingo, Irma Thomas, Mark Burnett, Martin Sheen, Johnny Mathis, Jose Feliciano, Harry Connick Jr., Ellis Marsalis, Christian Bale, Kate Hudson and a groundbreaking interview with comic legend, Jerry Lewis, to name just a few.

“In this beautiful book, Raymond Arroyo is sharing the true Magi story with everyone. It will surely inspire all readers to adopt the lessons and traditions of Three Kings Day—and keep the Christmas spirit alive for all twelve days of Christmas.” – Rachel Campos Duffy New York Times Bestselling Author, Fox & Friends Weekend Co-host