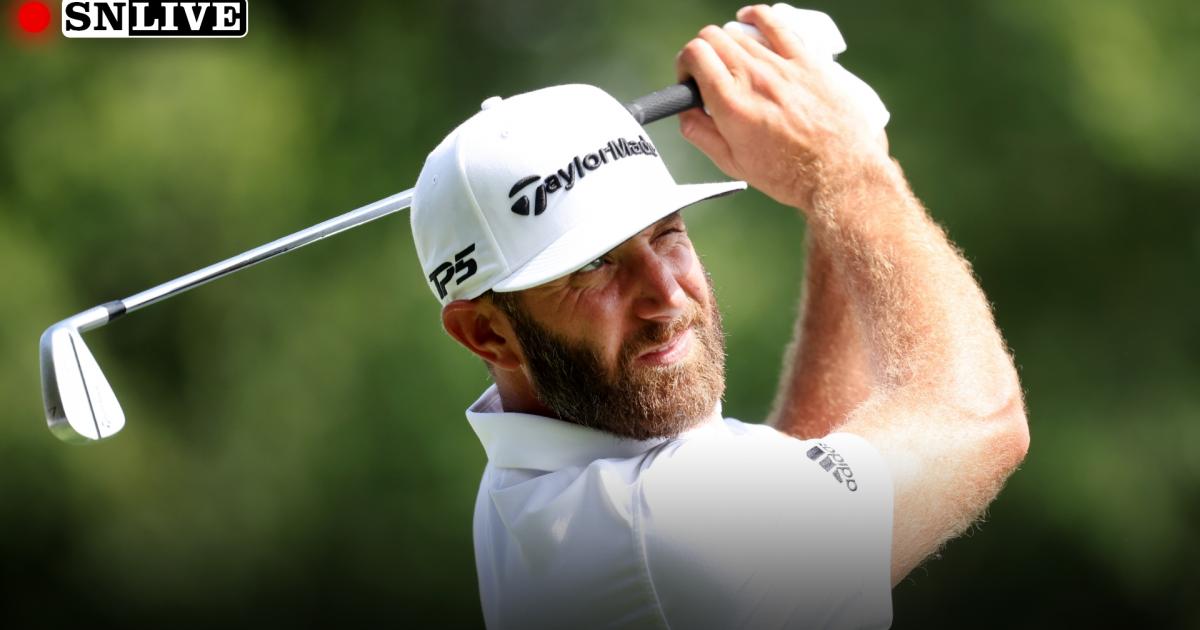 LIV Golf is in the United States for the second time — and is holding its third tournament overall — this weekend.

South African golfers have won each of the first two LIV Golf events. Charl Schwartzel opened the series with a win outside London, while Branden Grace won outside Portland, Ore., on July 2.

The Sporting News is providing live updates and highlights of LIV Golf Bedminster. Follow along for complete results.

3:27 p.m.: On the seventh hole, Johnson over-shoots the whole with the approach, and it rolls down the hill. He’ll have a difficult up-and-down for par.

3:24 p.m.: The field has continued to tighten up, with nine golfers now 2 under par or better.

A whole lot of birdies

3:12 p.m.: Schwartzl moves up to a tie for third at 2 under with a birdie putt on the ninth hole. With 11 holes to play in the first round, there are nine golfers at 2 under or better, with Stenson and Howell holding onto the lead at 3 under.

3:07 p.m.: Bubba Watson makes it official that he is joining LIV Golf. He interviewed on the broadcast of Friday’s Round 1, and LIV announced his addition on Twitter.

3:01 p.m.: A great approach on the 10th hole helps Howell pick up a birdie to tie Stenson for the lead. Stenson just misses a difficult uphill putt for birdie to stay in sole possession of the lead, and the two will be tied with 12 holes to play.

2:54 p.m.: Westwood takes advantage of the eighth hole by shooting a birdie on the par 5 to move to a tie for second.

2:48 p.m.: At the third hole, Stenson misses the hole wide left for a shot at a birdie putt to move to a two-stroke lead. He’ll have a short putt to save par.

2:44 p.m.: Peter Uihlein’s putt for birdie on the 10th hole comes up just short. He’ll tap in for par. That would have moved him to a tie for second at 2 under. Kozuma makes his birdie putt to move up the leaderboard.

2:34 p.m.: Stenson now steps out to sole possession of the lead by making a putt on the third hole. He’s now 2 under.

2:31 p.m.: With 14 holes to play, no one has been able to take command and run away with the lead. Charles Howell III ties Vincent, Chase Koepka, Stenson and Ortiz at 2 under, while 11 golfers are tied for sixth place at 1 under.

2:20 p.m.: All of a sudden, Chase Koepka has some company in first place. Birdies from Stenson and Carlos Ortiz move them to 2 under.

Making moves up the leaderboard 👀

2:15 p.m.: Chase Koepka is now the sole leader after he sank a long birdie putt to go 2 under, while Kozuma dropped to the tie for second.

2:12 p.m.: Birdies from Bryson DeChambeau and Jason Kokrak propel them to join the busy field of golfers tied at 1 under par.

2 p.m.: Mickelson sinks a long putt to save par. He’s improved since a shaky start on the first hole.

1:56 p.m.: Kozuma now grabs sole possession of first as he makes a birdie to move to 2 under.

1:50 p.m.: Schwartzel bogeys the fourth hole to fall back into a tie for second place. Perez remains a stroke ahead of Schwartzel, Kozuma, Chase Koepka and Branden Grace.

1:47 p.m.: Johnson’s putt at the 18th hole rolls just around the edge of the cup on his chance for birdie. He’ll have to putt to save par.

1:42 p.m.: Over on the third hole, Charl Schwartzel makes his second birdie to move into a tie with Perez at 2 under. Both off to strong starts.

1:42 p.m.: Mickelson saves par after a shaky start to stay at just 1 over through the first two holes.

1:39 p.m.: Pat Perez is now in sole possession of the lead as he’s scored birdies on his first two holes. Four other golfers tied for second at 1 under, and plenty tied for sixth at an even par as everyone wraps up their second holes of the day.

Pat Perez quick on the board

1:33 p.m.: Mickelson is off to a slow start at Bedminster. After hitting a bogey on his first hole of the day, his second shot on a par 4 misses the green. He’ll have to go up and down for par.

1:31 p.m.: Jinichiro Kozuma picks up the first birdie of the day as he takes the lead to start his round.

1:24 p.m.: Graeme McDowell’s birdie putt is just wide right, but he will tap in for par.

1:23 p.m.: Henrik Stenson misses the chance to birdie on his first hole of the game. He’ll finish off for par on the hole.

1:15 p.m.: LIV Golf is underway in Bedminster as Brooks Koepka, Louis Oosthuizen and a number of other golfers tee off across the Trump National Golf Club in New Jersey.

1:05 p.m.: Less than 10 minutes now from the start of the first round of LIV Golf Bedminster.

How to watch LIV Golf Bedminster

LIV Golf will not be on television in the U.S., meaning viewers will have to stream the event.

Viewers in the U.K. can watch it on DAZN and Sky.

LIV Golf uses a shotgun start for its events. Players begin at the same time across the course on different holes and move in order from there.