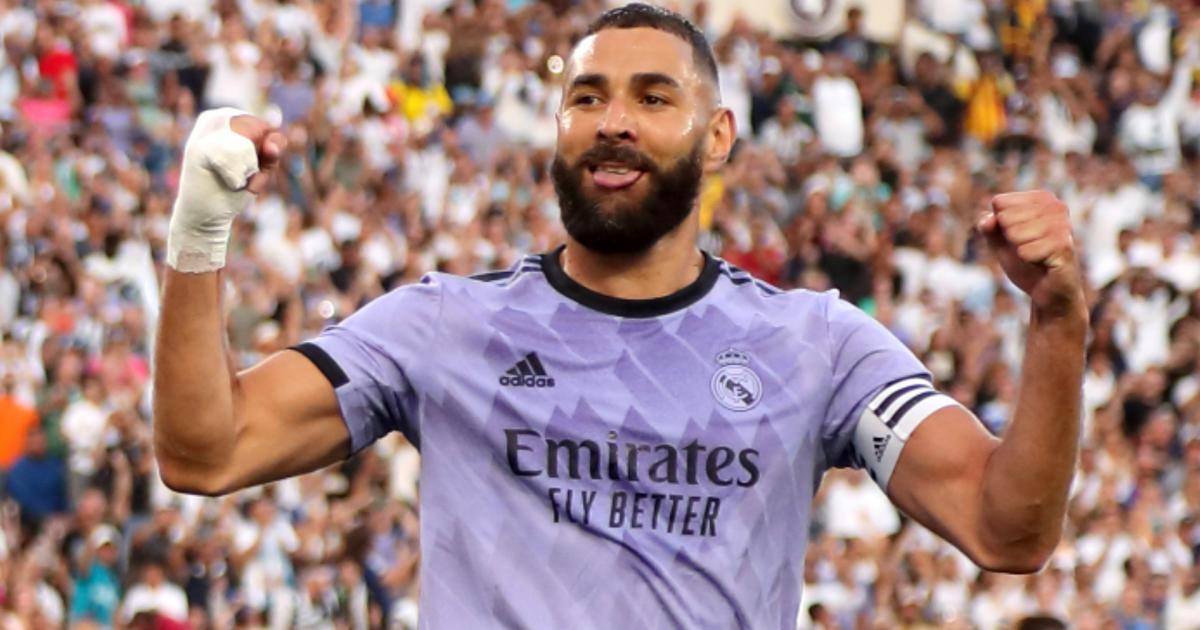 Real Madrid registered a dominating victory in their final preseason match with a comprehensive 2-0 victory over Italian giants Juventus, who were outplayed for large stretches by the European champions.

Los Merengues swarmed Juventus from the opening minute and did not relent on the pressure even after the entire squad was rotated in the second half. It’s a testament to the depth and culture of a squad that expects nothing less than winning every competition they’re part of beginning with the Aug. 10 UEFA Super Cup.

In front of a sellout crowd of more than 93,000 Real Madrid showed off a fluid, flowing attack with Karim Benzema and Vinicius Jr setting the tone with their interchanging and quick combinations. Vinicius earned a penalty on one of those lightning quick vertical attacks, and Benzema converted. Another clinical passing sequence led to the second goal by Marco Asensio in the second half..

It was a difficult night for Juventus, which looked disjointed and lacking ideas compared to Real Madrid. Star forward Dusan Vlahovic got his first minutes of the preseason, but he was isolated and didn’t impact the match. Star signing Angel Di Maria was invisible, and starters Paul Pogba, Scsczny and Weston McKennie were absent due to injury.

Real Madrid’s next match comes on Aug. 10 in Helsinki when they face Eintracht Frankfurt for the UEFA Super Cup. Juventus will play another friendly against Atletico Madrid before opening its Serie A season against Sassuolo on Aug. 15.

Watch the highlights below:

Full-time: Here’s all you needed to see about how this one went:

Real Madrid toying with Juventus, this was such a nice passing sequence. EVERY single RM player got a touch and when they lost the ball it took them 5 seconds to win it back. pic.twitter.com/xyipEySlCO

86th min.: Best Juventus chance of the second half. Cross from the right which crosses the face of goal and goes out for a corner.

81st min.: The crowd is shouting “ole” with every Real Madrid pass. This is humiliating for Juventus.

72nd min.: Over the course of the last 10 minutes Juventus have trickled in subs, including one for a sub who was immediately injured. Here’s the updated Juve squad:

69th min.: Goal Real! Bunch of new players for Real Madrid? Same Real Madrid. Incredible passing combination at the top of the box and Jesus Vallejo cross the ball from the left to the top of the six-yard box, where Marco Asensio punches home. Beautiful in its simplicity.

Asensio finds the back of the net this time 🙌 pic.twitter.com/FsLpr3el31

62nd min.: It’s a clinic from Real Madrid. Karim Benzema curls the ball that was destined for the low left corner, but Juve ‘keeper Perin saves it. The Real Madrid players don’t want to come off the field. They quickly took the corner kick so that the subs couldn’t make it in.

59th min.: Everyone’s getting involved for Real Madrid. Dani Carvajal ripped a shot that Juve’s ‘keeper saved, and then Toni Kroos took a shot that finished high. Real Madrid are about to make a number of subs.

54th min.: It’s been all Real Madrid to start the second half and they’re playing with the same verve and inspired teamwork.

Juve’s Manuel Locatelli had to make an incredible acrobatic leap to stop a clear chance, Bonucci had a miscommunication with his ‘keeper, and Real Madrid’s David Alaba pushed all the way up from center back to fire on goal. It’s not been pretty for the Italian side.

46th min.: Second half is underway. Antonio Rudiger is in for Eder Militao. Juan Cuadrado comes in for Angel Di Maria.

Half-time: Real Madrid with the deserved lead in this one. From the opening whistle the European champions showed their intent. They’re direct and vertical, and they attack in numbers with players interchanging positions and combining well. When Karim Benzema and Vinicius Jr. are on the ball things are happening.

And for as fluid as Real Madrid are, Juventus are slow, disjointed and without ideas in the attack. Anything they do in the final third typically depends on Angel Di Maria’s creativity, which has been little today — it seems to be a low energy outing for him so far — or they depend on Dusan Vlahovic to create something for himself. But Vlahovic has been isolated and invisible. And there is no chemistry with Moise Kean. It’s the first game that Vlahovic and Di Maria are playing together, but Juve coach Massimiliano Allegri has a lot of work to do.</p>

44th min.: Dusan Vlahovic has been anonymous, but he gets a ball in the box only for Eder Militao to recover acrobatically and clear the ball for a corner. Nothing comes of it.

38th min.: Not much happening in the game, but what’s clear is that Real Madrid are very dangerous when they’re running at the Juventus back line. Juventus doesn’t have as easy a time creating dangerous attacking moves. Things don’t flow as well as they do for Real.

27th min.: Juventus have a case for a penalty! But the referee does not call it and there is no VAR. Ferland Mendy inexplicably passes the ball back into his own box and Angel Di Maria beats Eder Militao to the ball. It looked like a penalty. But it remains 1-0.

17th min.: Penalty for Real Madrid! After a bad Dusan Vlahovic giveaway, Vinicius Jr takes the ball into the box and Danilo brings him down from behind. Clear penalty.

Real Madrid was given a PK for this challenge on Vinícius Júnior pic.twitter.com/NgxyPbVBLl

13th min.: Juve captain Leonardo Bonucci hits the top left corner of the goal on a set piece. Wow, how this game has changed. Moments later Dusan Vlahovic and Denis Zakaria get in each other’s way in the Real Madrid box. Juventus are back in this game.

Off the crossbar for @JuventusFC! 😬 pic.twitter.com/7R62l7ElPG

11th min.: First serious attack from Juventus and it comes because left back Alex Sandro pushes all the way up to the end line. But the Juventus forwards can’t finish off the play.

The Spanish champions are off to an electric start. It’s another poor start to a match for Juventus (the same thing happened against Barcelona, with their giveaways only compounding the problems and the pressure).

1st min.: The match kicks off. Juventus are in their black-and-white stripes, while Real Madrid are in their lilac kits. After 10 seconds Real Madrid scores through Karim Benzema, but three players were offside.

10 mins from kickoff: Mr. Juventus himself is out in California rooting for the team he once repped in a big way.

🚨Weston McKennie will miss this friendly due to a left shoulder dislocation sustained during training today.

75 mins from kickoff: The Real Madrid fans outside the Rose Bowl:

120 mins from kickoff: Organizers announced an official sellout 24 hours prior to the match, and fans without tickets were “highly discouraged from showing up at Rose Bowl Stadium.” Meanwhile, those with tickets were told to show up two hours before the match to ensure they get in on time.

A crowd of more than 90,000 is expected for Saturday’s international friendly between Real Madrid and Juventus at the Rose Bowl.https://t.co/bszRJLxCZX

120 mins from kickoff: These are the jerseys that Real Madrid will be donning against Juventus:

👕 Real Madrid will wear the away kit against Juventus tonight. 🟣 pic.twitter.com/fZmAbelpol

Dani Carvajal recovers from an ankle injury and starts at right back against Juventus, but Lucas Vazquez is likely to replace him at halftime given it’s Carvajal’s first outing of the preseason. In the only other lineup question, Federico Valverde beats out Marco Asensio and Rodrygo for the right wing position.

Juventus manager Massimiliano Allegri previously confirmed that both Dusan Vlahovic and Weston McKennie would be making their preseason debuts against Real Madrid, but McKennie is nowhere to be found in the squad with early reports claiming a shoulder injury. Dusan Vlahovic makes his first start alongside Angel Di Maria and Moise Kean.

U.K.: This weekend’s friendly between Real Madrid and Juventus from the Rose Bowl in Pasadena, Calif., will be televised in the United Kingdom by Premier Sports 1 and will be available to stream on Premier Player HD.

USA: In the United States, Saturday’s friendly will be broadcast on FS2 and Fox Deportes, which can both be streamed on fuboTV. The match will also be on Fox Sports streaming platform Fox Sports Go.

Canada: DAZN will carry the match for fans in Canada.

Australia: Paramount+ will stream Real Madrid vs Juventus during midday hours in Australia.