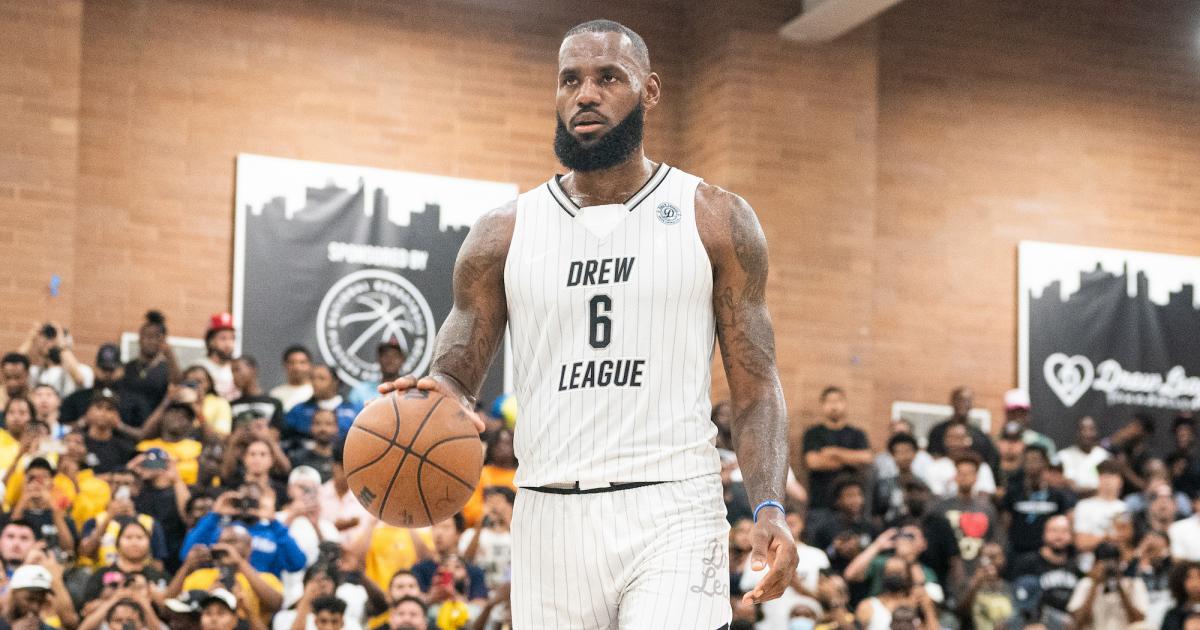 The Drew League has seen some of the best players in NBA history participate in its games, and that tradition has continued this summer.

Fans of the pro-am league, which was established in 1973, have witnessed the performances of superstars such as Kobe Bryant, Kevin Durant and LeBron James, who made his Drew League return this year. The four-time NBA MVP electrified the crowd and brought an incredible amount of energy to King Drew Magnet High School in Los Angeles.

“Just to see the kids out there being able to see LeBron James come play in Compton, like, you cannot beat that,” DeMar DeRozan, who played on the same team as James, said during a recent appearance on Draymond Green’s podcast. “The atmosphere was one of a kind. It was special, a couple moments where I just looked around.

“You see kids, just the smiles and the excitement on their faces. That’s something that they’re gonna remember forever, and that’s what it’s all about.”

“Just to see the kids out there being able to see @KingJames come play in Compton, you cannot beat that”

—@DeMar_DeRozan speaks with @Money23Green on the significance of LeBron playing at the Drew League pic.twitter.com/ekn4vLu221

But James isn’t the only one who has made a pit stop at the Drew League. Here’s a rundown of the stars who have made appearances in Drew League games this year.

MORE: Here are the NBA players we most want to see in the Drew League

DeRozan is a Drew League veteran, but James hadn’t participated in Drew League competition since 2011. He didn’t disappoint in his return, leading the MMV Cheaters to a 104-102 win over Black Pearl Elite.

Young and Collins brought their chemistry to the Drew League a week after James and DeRozan joined forces. The Hawks teammates provided plenty of entertainment with Black Pearl Elite, but they didn’t get a win, falling to the Citi Team Blazers by a final score of 103-100.

Isaiah Thomas pulled up at the Drew League and reminded everyone he is still a walking bucket.

Isaiah Thomas put on a show in the @DrewLeague today, FILLING IT UP with 45 PTS!@isaiahthomas: 45 PTS, 5 AST, 7 3PM pic.twitter.com/HueDTvOqay

The new-look Atlanta Hawks trio of Trae Young, John Collins and Dejounte Murray turned out at Jamal Crawford’s Pro-Am in Seattle, leading The Dream Team to a 126-121 win over the Sonics.

Murray, a Seattle native led the charge with 39 points, nine rebounds and seven assists, while Young added 37 points and 13 assists and Collins finished with 27 points and 17 rebounds.

Atlanta’s new big three brought the SHOW to the Crawsover 🍿

During a July 27 Twitch stream, George revealed that he plans on returning to the Drew League for the first time since 2014.

“Be on the lookout. I’ll be in the Drew League,” George said. “I’ll pop up one of these weekends in the Drew.”

Paul George announcing his return to the Drew League during a Twitch stream 🔥 pic.twitter.com/9yQBmYej9A

The Athletic’s Law Murray reported that George could take the floor at some point in August.

Here is the full Drew League schedule for this weekend:

Week 8 of #TheDrew tips off Saturday.

🗓 Here’s a look at the full schedule.

All games will be streamed live on the @NBA app! 📲 pic.twitter.com/gMtOf2sGXp

How to watch Drew League games

Basketball fans can stream Drew League games via NBA.com, the NBA app or the Caffeine TV app. On the day of games, NBA.com and NBA app pages will be updated with links to live streams. (If you are using the NBA app, you can find Drew League streams under the games tab.)

The NBA will also share full replays of games and highlights on its various platforms.