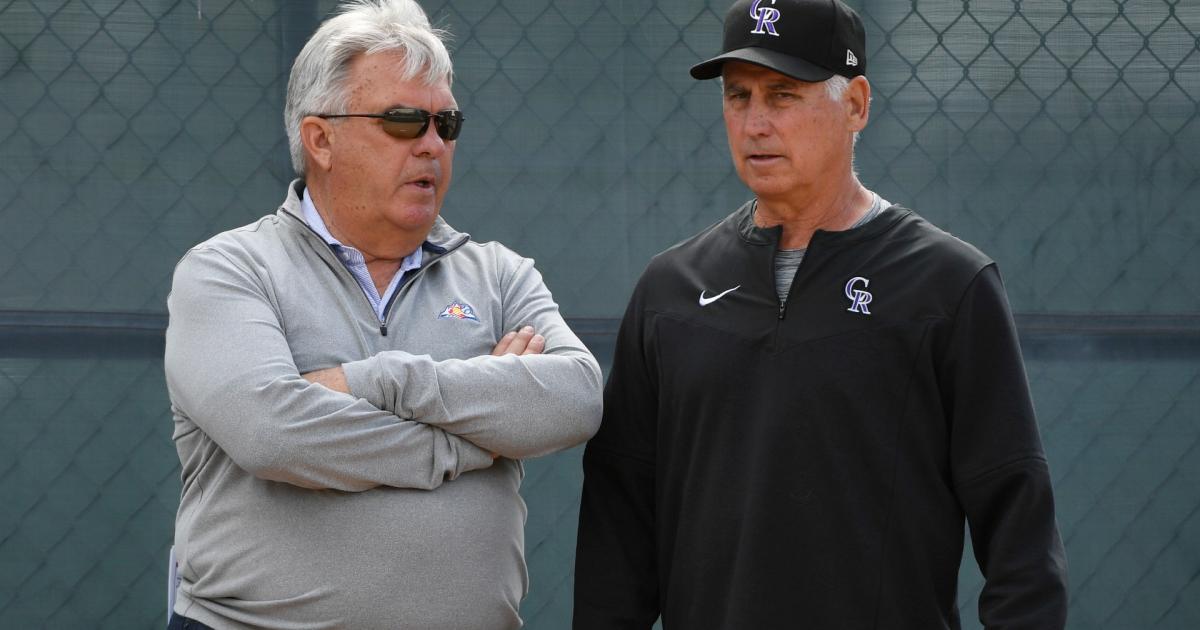 It’s the Rockies world, and we’re all just living in it.

At the trade deadline, 29 of the 30 MLB clubs made a trade in some capacity. The outlier? The ever-confusing Colorado Rockies.

At some point in the season, teams have to make a choice. Are we buying and trying to win this year? Or are we selling and hoping to retool in the offseason? The Rockies decided neither was an acceptable answer, signing 37-year-old closer Daniel Bard to a two-year extension and otherwise standing pat, despite being 46-60 and seemingly out of playoff contention.

Rockies GM Bill Schmidt had the stock-standard explanation for why the Rockies didn’t do anything at the deadline with a dishonest twist.

“We made attempts to try to get better,” Schmidt said when asked about the players on expiring contracts, per The Denver Post. “And at the end of the day, we weren’t able to match up with clubs.”

RIVERA: Trout Country: Mike Trout, Millville and the legend of the 18-K no-hitter

When he was asked about being the only team to not make a trade, Schmidt added:

That is entirely untrue, with the Atlanta Braves signing Austin Riley to a 10-year contract worth $212 million and the Padres signing Joe Musgrove to a five-year extension worth $100 million.

It’s just the latest example of Rockies baseball seeming to boil down to hanging out with friends. They exist on an island, neither buying nor selling, just taking in vibes watching other teams ebb and flow around them.

It’s been like this for a long time for the Rockies, but in the past year and a half or so it’s especially present. Here’s a quick timeline of the Rockies since they controversially traded Nolan Arenado to the Cardinals last year.

MORE: Baseball, Vin Scully and The Sporting News, intertwined since the 1950s

For whatever reason, the Rockies felt their hand was forced because they had built opt-outs into the deal for Arenado after 2021 and 2022. Why they did this continues to confuse. The hope was they would use the money saved from this contract to re-up with Trevor Story. More on that later.

Toward the beginning of the 2021 MLB season, Rockies GM Jeff Bridich abruptly resigned after being with the franchise since 2004 and the GM since 2014.

Bridich was coy in describing why he was leaving. In a statement he said, in part: “After recent conversations with Dick and Greg Feasel regarding the organization and its future, it became abundantly clear that ushering in a new leadership structure was critically important. With that in mind we arrived at this decision to part ways, and ultimately it will be what is best for the Rockies and for me.”

That full statement reads like a resignation disguised as a firing, but of course that’s speculative and should be treated as such. Feasel was named team president in short order, and Schmidt was named the interim GM.

By the trade deadline last season, the Rockies were 45-59 and had been inconsistent throughout the month of July.

They made just one move at the deadline, trading perennial deadline piece Mychal Givens to the Reds for Case Williams and Noah Davis.

While that’s ultimately a bit of a nothing-burger move, it is a move all the same. The Rockies, however, were still sitting on expiring contracts for Jon Gray and C.J. Cron, and Story. Ultimately, however, they decided to stand pat.

The Rockies continued their “all-in-the-family” vibe, naming interim GM Bill Schmidt to the role permanently shortly after the season.

Schmidt has been with the Rockies organization since 1999, and he hadn’t done much of note when the Rockies gave him the full-time role.

He had a lot of time scouting within the Rockies org, but there was a small sample size to go off of from him in the GM role.

“After five months as our interim general manager, it became increasingly clear that Bill was the right person to lead this franchise forward,” Rockies president and CEO Greg Feasel said in a statement when they hired Schmidt full-time. “We already knew Bill as a trusted and respected baseball professional within the game. He came into a challenging situation and quickly impacted the play on and off the field.”

The Rockies came into free agency after the lockout having already extended first baseman C.J. Cron ostensibly looking to make a move to assuage trading Arenado for basically peanuts.

They found their guy in Kris Bryant, who had been traded from the Cubs to the Giants during the 2021 deadline. The Rockies signed Bryant to a shocking seven-year, $182 million deal — seemingly well above-market — on a contract that would have extended past the end of Arenado’s.

The Rockies had already moved on from Trevor Story by signing Jose Iglesias, and signing Bryant would have been the move of a team that felt it needed a temperamental power bat to compete. The Rockies, however, indicated they were going to build around Bryant, who has battled injuries in the first year of his massive deal.

Bryant, to his credit, has done his part when he can play. He is batting over .300 on the year and has an OPS over .850, but with just five home runs, there are some justified concerns over the effect his back is having on his swing.

In addition to the Rockies signing Bryant, they also let franchise mainstay Trevor Story walk to the Red Sox for a six-year, $140 million.

By signing Iglesias, it was apparent the Rockies were moving on from Story. But it only makes the decision to not trade him at last year’s deadline more confusing.

So we come to Tuesday.

The Colorado Rockies aren’t competing this year. They undoubtedly had interested suitors for Bard, and instead signed him (again, at 37) to a two-year extension. They also didn’t appear to field many calls for Cron, which is somewhat surprising given his two-year deal doesn’t fit with the Rockies timeline.

Alex Colome was another player who could have been moved but wasn’t.

Ultimately, the Rockies plans either don’t make sense or don’t exist. They seem to be a team twisting in the wind, desperately wanting to say they aren’t in a rebuild when it’s clear they have to be.

Their farm system is in the bottom half of MLB teams, their front office seems horribly confused and blinded by team loyalty, and they’re trying to shed payroll while simultaneously adding more.

Rockies fans shouldn’t even be mad. They should be confused.

This seems to be a team that wants to win. In a league full of analytical, cut-throat minds, the Rockies seem to be the last vestige of a bygone era, where teams just did things to do them.

That may have worked in the 1990s and the 2000s — indeed, the Rockies made a World Series in 2007 — but in today’s game, teams have to commit. The Rockies continue to show they don’t know how. Schmidt is more of the same. Perhaps the team needs to look outside of the organization if they’re going to truly get better and compete again.