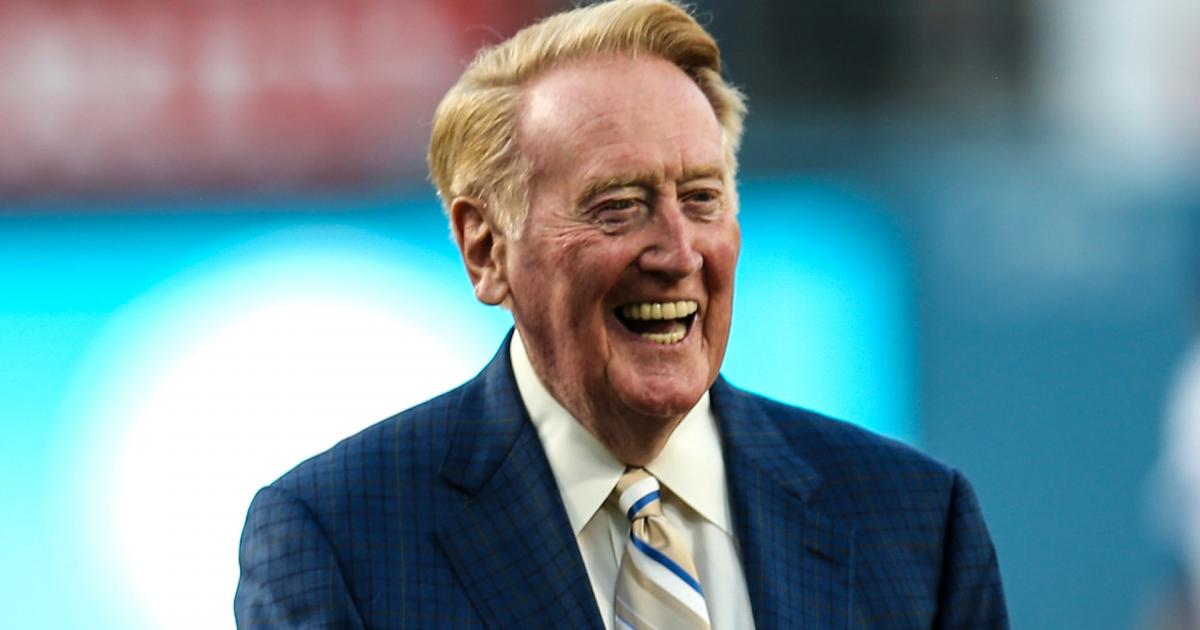 Legendary broadcaster Vin Scully, the voice of the Dodgers for 67 years, has died. He was 94 years old.

Scully was the voice of baseball for so many; from Brooklyn to the Chavez Ravine and everywhere in between, Scully was there, following the Dodgers.

He covered a host of the sport’s finest players, including Jackie Robinson, Sandy Koufax, Kirk Gibson and Clayton Kershaw. With a soothing voice, a wry sense of humor and a collection of catchphrases like no other, Scully brought the game to living rooms across the country. A man known for his impeccable timing, knowing exactly when to step back and allow the crowd to carry the moment, Scully transformed broadcasting.

Scully started his career with the Dodgers in 1950. At that time he was just a fresh-faced 22-year old then, calling games when the Dodgers played at Ebbets Field in Brooklyn. When they left for L.A. in 1958, Scully did, too.

He was present for nearly every memorable moment that happened at Dodger Stadium. Championships, no hitters, perfect games, walk-off home-runs — Scully was there.

Not only did he call Dodgers games, he told stories. Scully brought you into the booth with him, providing guided imageries while sitting in his booth from Chavez Ravine, which overlooked downtown LA.

Scully became the standard-bearer for announcers in the sport. And as his career went on, he began to rack up the accomplishments. Scully won numerous Sportscaster of the Year awards, was inducted in the National Radio Hall of Fame and NAB Broadcasting Hall of Fame and has a star on the Hollywood Walk of Fame. In 2016, Elysian Park Avenue — a road right outside Dodger Stadium — was renamed Vin Scully Avenue in his honor. That same year, Scully received the Presidential Medal of Freedom, the highest honor a civilian can receive.

He also won the Commissioner’s Historic Achievement award in 2014, the perfect accolade to go with his 1982 induction into Cooperstown as a Ford C. Frisk award recipient.

When did Vin Scully retire?

In 2016, Scully announced his intention to retire. He called his last game on September 25th of that year. In typical Scully fashion, it was dramatic — Charlie Culberson smacked a walk-off blast in the Dodger Stadium bleachers to give the Blue Crew a victory.

Even after his retirement, Scully remained involved with the franchise. Scully even helped announce that Dodger Stadium was hosting the 2020 All-Star Game.

The baseball world came together to mourn the loss of Vin Scully on Tuesday night:

There will never be another Vin Scully. You will be forever missed. 🎙💙 pic.twitter.com/WyTmXsati5

Vin Scully was a storyteller, and nobody ever told the story of baseball better. He called games with such elegance and grace. He spoke only when necessary, allowing the broadcast to breathe when it demanded. He made baseball a more beautiful game. RIP. https://t.co/cmQ2nGJW3Y

Dodger Stadium press box. Gorgeous day. I hear a voice singing behind me. Beautiful, sonorous tones. I turn around. Vin Scully. He was warming up his voice for the day. It was like watching Jordan take free throws or Yo-Yo Ma tune his cello. A master, forever honoring the craft.

The Dodgers announce that Vin Scully passed away at age 94. The voice of the franchise and of many generations of baseball fans.

Vin Scully announced games every night from April to October for 70 years. He talked and chatted and mused and related and observed. He always made it seem like he was sitting right next to you, talking only to you — just your nice friend who loved baseball.

What’s so remarkable about Bill Russell and Vin Scully is how many generations they impacted. Been struck by how many decades each man continued to reach those who watched and listened and learned. Lives lived in such exceptional fashion.

A quick Vin Scully classics playlist off the top of my head. Feel free to add your favorites. pic.twitter.com/0Tr4qQJBNQ

RIP Vin Scully, an ancient Irish seanchaí in a broadcast booth, whose gilded voice soundtracked the eternal blue summer, who could distill a century’s worth of wisdom into a single at-bat, the last link to Brooklyn, the last link to a collective memory, the greatest of all-time. pic.twitter.com/UzsDeUSAKR

As long as you live keep smiling, because it brightens everybody’s day. -Vin Scully pic.twitter.com/5R0xxpA7Xb

there is no one who’s ever lived who i admired more than vin scully. even well past 80 years of age he would run a one-man broadcast booth every day and he was sharper, funnier, and more endearing than anybody. i was and am in awe of him. love you mr. scully, you were one of one https://t.co/iHNPlTbERn

We mourn the passing of legendary @Dodgers broadcaster Vin Scully. He was 94. https://t.co/L0pIR7j5mg pic.twitter.com/hZBzW4Z1WH