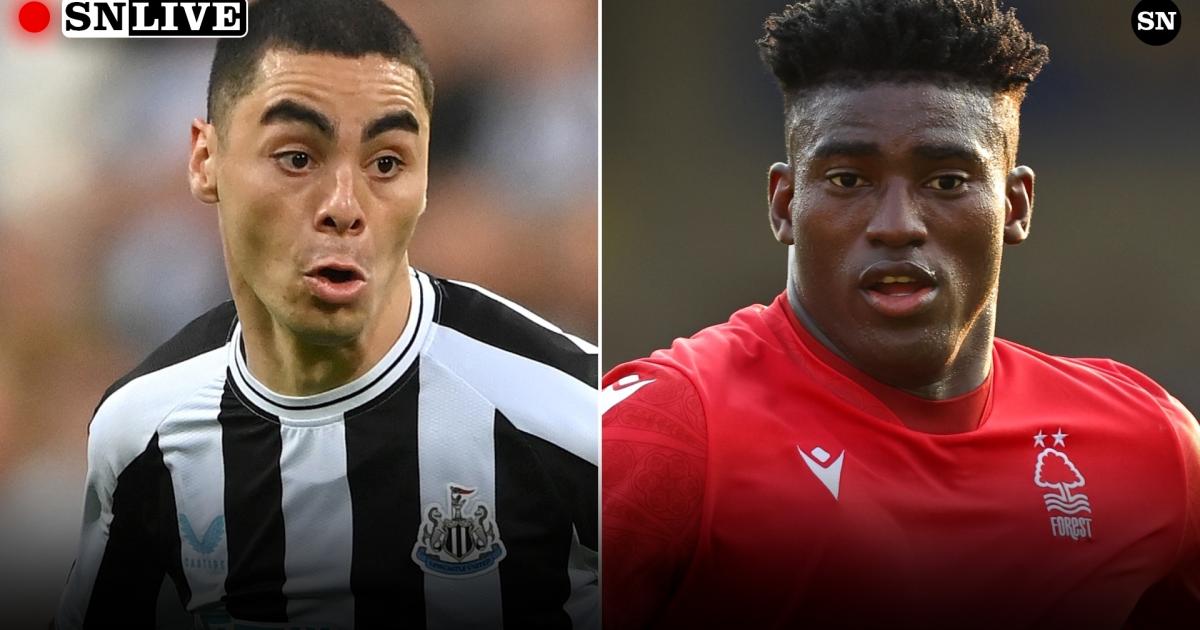 Newly promoted Nottingham Forest will making their long-awaited return to the Premier League when they travel to St. James’ Park to take on an ambitious Newcastle United side that is intent on showing it can take the next step and become a Top 10 club and challenge for European places this season.

Manager Steve Cooper is credited with inspiring Forest’s turnaround from last place in the Championship to Premier League promotion and he’s brought in a dozen new players ahead of an expected relegation battle, with ex-Manchester United forward Jesse Lingard and Taiwo Awoniyi — who scored 15 goals for Union Berlin in the Bundesliga last term — the standout names.

A new manager also righted the Newcastle ship last season, as Eddie Howe guided the Magpies to 11th place after taking over for Steve Bruce. He gave the squad a tactical structure that allowed them to be defensively solid and it’s notable that the club targeted the backline for its summer transfers by adding ex-Burnley goalkeeper Nick Pope, LOSC Lille’s in-demand Dutch centre-back Sven Botman, and Aston Villa left-back Matt Targett.

Newcastle are looking to keep up the historical trend of never losing to Nottingham Forest in what will be their ninth Premier League meeting. Forest did win two consecutive League Cup knockout showdowns in 2017 and 2018.

80th min.: Joe Willock replaced by Sean Longstaff and Miguel Almiron gets a hand with Ryan Fraser taking his place.

75th min.: Goal Newcastle! Joelinton with another attacking run out of midfield and his cross is finished splendidly by Callum Wilson, who applies a classy poke to the ball. It’s a deserved 2-0 lead for the Magpies.

75th min.: Forest sub. Orel Mangala is on for Lewis O’Brien to make his debut for the club. We’ll see if there’s better quality from Forest between Mangala and Awoniyi.

72nd min.: Forest get a corner kick, but even the set pieces are lacking quality. The ball from Brennan Johnson is easily collected by Newcastle ‘keeper Nick Pope.

63rd min.: What a chance for Forest! Neco Williams with great work down the right and his pinpoint cross was headed into the ground by Sam Surridge, who should have done better. Surridge comes off moments later with Awoniyi taking his spot.

58th min.: Goal Newcastle! After Miguel Almiron and Allan Saint-Maximin were misfiring in the box, Fabian Schar collects a clearance and blasts it into the top right corner. It will be one of the top goals of the week.

Can you really hit it any better than @fabianschaer did here?💥😳

56th min.: O’Brien gets a yellow card on a play that captures the game so far. O’Brien had the ball, Almiron pressed him quickly and won it.

51st min.: Penalty Newcastle? Callum Wilson appeals to the referee that he was pulled in the box as he chased a cross. Replays don’t show much in that challenge from Worrall.

The half has started in a similar vein. Newcastle buzzing around, Forest trying to push forward, but their attempts fizzle out quickly.

46th min.: Second half is underway and no changes to start the second 45 minutes.

Half-time: That was all Newcastle United, but Nottingham Forest have done well to hold firm despite one or two chaotic moments.

Allan Saint-Maximin from the left and Miguel Almiron on the right have presented the biggest danger to the visitors, Joelinton has been a presence in midfield, and Bruno Guimaraes is putting on a passing clinic with his through balls. The Brazilian and Almiron are connecting well.

Kieran Trippier wasn’t too shabby either, though his set pieces left something to be desired.

Kieran Trippier compared to all players in the first half of the 3pm Premier League kick-offs:

Nottingham Forest threatened on a lone opportunity which was expertly blocked. But they have Taiwo Awoniyi they can bring off the bench. And Orel Mangala could help them gain a bit more of a hold in midfield. It’d be a surprise if manager Steve Cooper didn’t make any changes.

40th min.: Chance for Forest! Fabian Schar with a sensational sliding block on a Jesse Lingard shot in the box after some good work from Forest’s Lewis O’Brien. Best chance of the half for Forest and it didn’t even make it on frame.

37th min.: Saint-Maximin chance! The Frenchman gets the ball on that left wing and is targeting Forest captain Worrall. This time his slicing run ends in a shot on goal that Dean Henderson stops. This half has been one-way traffic.

31st min.: Chance Newcastle! Big Joelinton pushes into the attack and he rips two shots in consecutive minutes with one coming close to Forest’s left post. The Newcastle opener feels like it’s merely a matter of time. Forest are no threat.

26th min.: Some chaos in and around the Forest box that ends with a shot from Bruno Guimaraes that’s off the mark. The visitors can’t possess the ball for any meaningful stretch and the Newcastle pressure is simply incessant.

22nd min.: Dangerous from Newcastle! Miguel Almiron presses Forest newcomer Moussa Niakhate and blocks the defender’s pass, but Forest goalkeeper Dean Henderson reacts and gets to the ball in the box before Almiron does. Niakhate might be having some nerves early in his debut.

15th min.: YELLOW CARD to Forest captain Joe Worrall for taking down Allan Saint-Maximin, who’s been active with his take-ons. Kieran Trippier’s shot on the ensuing set piece is off the wall. Newcastle can’t take advantage of its many set pieces thus far.

13th min.: Forest’s Jesse Lingard is positioned behind the two forwards Sam Surridge (left) and Brennan Johnson (right). Surridge has had two threatening runs in the Newcastle half in the span of a couple of minutes, but he couldn’t do anything with them.

8th min.: Newcastle try another corner-kick routine and it ends with a Dan Burn header from a tight angle. The designed set piece plays haven’t been working out for the Magpies thus far.

4th min.: MASSIVE BLOCK. A Joe Willock blast takes a deflection for Newcastle’s second corner, but nothing results from it. Had Scott McKenna not blocked that shot, it was headed on goal. Good start from the home side, as you’d expect.

1st min.: Newcastle kicks off. Teams in their traditional colors.

5 mins. from kickoff: The atmosphere at the stadium as the anticipation grows. Both sets of supporters will be feeling the nerves right about now.

60 mins. from kickoff: Lineups are in. Nottingham Forest’s Taiwo Awoniyi starts on the bench, as does Sven Botman for Newcastle. But Jesse Lingard (Forest), Moussa Niakhate (Forest) and Nick Pope (Newcastle) all make their debuts.

Steve Cooper names his side for our @premierleague opener at St James’ Park. 🔢

90 mins. from kickoff: All eyes on what kind of performance this Nottingham Forest team can put together in their Premier League return.

120 mins. from kickoff: For proper historical context, here’s video proof of the last time that Nottingham Forest played in the Premier League back in 1999:

The last time Nottingham Forest played in the Premier League was May 16, 1999. They defeated Leicester City 1-0 with a goal from Chris Bart-Williams.

23 years later, they return to the PL. They travel to Newcastle for a match Saturday at 10AM ET on @PeacockTV.#NEWNFO | #NFFC pic.twitter.com/8VKdPwYfT6

In the two biggest decisions facing Howe, Nick Pope gets the start over Martin Dubravka, but newcomer Sven Botman does not unseat Dan Burn, who will start in central defense. Paraguayan attacker Miguel Almiron was on fire during preseason (six goals), but he now has to carry that form into games that count.

Jonjo Shelvey (hamstring), Federico Fernandez (calf), and Jamal Lewis (calf) are out due to injury and Javier Manquillo (groin) only recently returned to training. Emil Krafth and Paul Dummett did not make the matchday squad.

Newcomer Moussa Niakhate makes his debut at the heart of the defense, though club record signing Taiwo Awoniyi, and Belgian midfielder Orel Mangala will have to wait to make their bow off the bench. It’ll be Neco Williams and Harry Toffolo as the wing-backs.

Defender Steve Cook and forward Joe Lolley did not make the 20-man matchday squad. Ryan Yates (knee) and Omar Richards (hairline leg fracture) were already confirmed to miss the match with Yates billed as “not far away,” according to Cooper.

UK: Matches in the 3 p.m. local window are not televised in the UK. A radio broadcast is available on BBC Radio 5 Live.

USA: The Newcastle vs. Nottingham Forest match is exclusively streamed on NBC’s Peacock for subscribers.

Canada: Every Premier League game streams live and on demand exclusively via fuboTV in 2022/23.

Australia: Fans in Australia can stream matches live and on demand on Optus Sport this season.