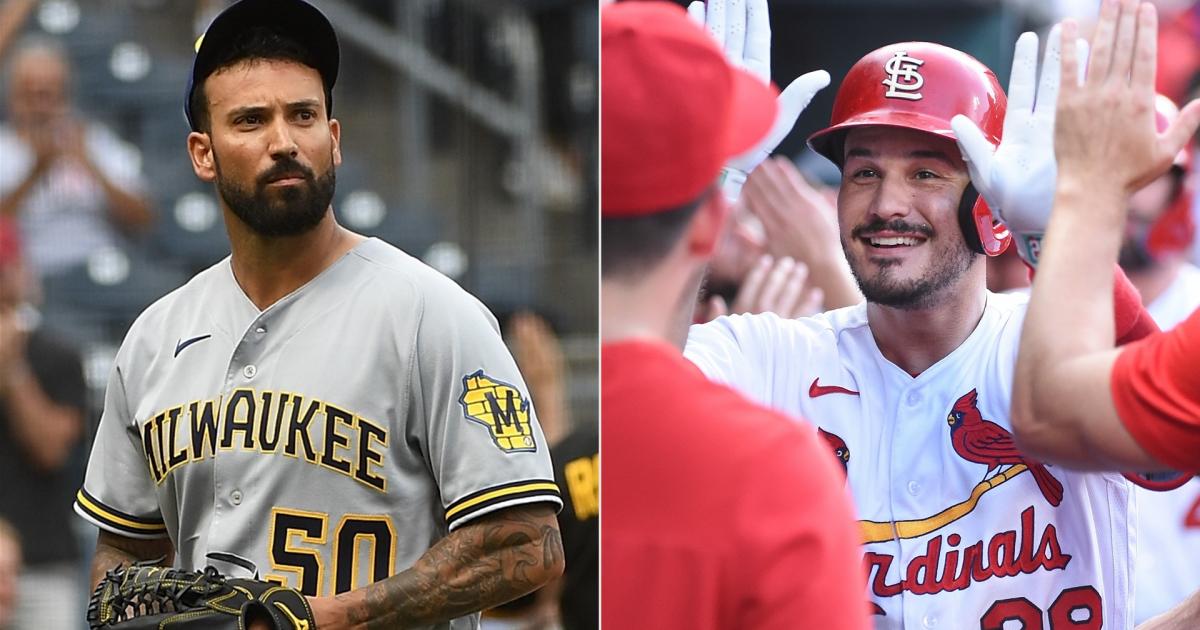 On the morning of Aug. 1, all was well in Milwaukee.

The Brewers had spent the entire month of July in first place in the NL Central and had extended their lead to 3.0 games over the Cardinals, thanks to a run of seven wins in nine games. The offense was rolling, with at least six runs scored in six of those seven wins. And they had most dominating back-of-the-bullpen 1-2 punch in baseball in All-Stars Josh Hader and Devin Williams, with both relievers averaging more than 14 strikeouts per nine innings. They were the clear front-runners in the division.

On the morning of Aug. 9, all is not well in Milwaukee.

The Brewers have lost five of their past six games, flailing against the Reds and Pirates, two teams at the bottom of the Central that spent the days ahead of the Aug. 2 trade deadline figuring out which key players to ship away in exchange for prospects that might help years down the road. They’re now in second place in the NL Central, a full two games behind the Cardinals. And, worst of all, they no longer have Hader. That, folks, was stunning.

A year away from free-agency, the lefty reliever who has 125 saves, a 15.8 K/9 and 2.54 ERA/2.63 FIP since the start of the 2018 season was traded to the Padres on Aug. 1. The Brewers traded Hader to San Diego in exchange for a package including Padres closer Taylor Rogers — who had 28 saves and a 4.35 ERA — plus well-regarded prospects Robert Gasser and Esteury Ruiz and pitcher Dinelson Lamet, who was placed on waivers and claimed by the Rockies. The Brewers made another move to help replace Hader, trading for reliever Matt Bush, who had a 2.95 ERA with the Rangers this season.

It’s at this moment we’ll point out what every Brewers fan already knows: All five losses since the trade of Hader were by either one or two runs, and two were in walk-off fashion.

In those five losses, Milwaukee relievers gave up 11 earned runs (15 overall). In the walk-off loss in Pittsburgh on Aug. 3, Williams gave up a ninth-inning solo homer by Bryan Reynolds. The next day, the Pirates scored two in the 10th off Bush, thanks to the magic runner, a double, a pair of intentional walks and a wild pitch that let Reynolds score the winning run.

Fellow Brewers newcomer Rogers gave up the go-ahead run in the eighth against Cincinnati on Sunday, a game Milwaukee eventually lost, 4-2, in 10 innings. The Reds scored twice on Williams in the 10th; the magic runner crossed the plate on an infield single by Aristides Aquino and throwing error by third baseman Mike Brosseau, then a sacrifice fly. That’s not on Williams, of course, but an example of how everything seems to have fallen apart in the past week.

Truth is, you’d be hard-pressed to think of a deadline trade that has backfired so quickly, so spectacularly. Maybe in the long run, it works out. In the moment, though, the unnecessary — remember, Hader wasn’t set to become a free agent until after the 2023 season, and the Brewers claimed over and over that the trade wasn’t a financial necessity — remodeling of a bullpen that was the team’s greatest strength looks like a series of disastrous decisions by general manager David Stearns. It’s only early August, of course, but it’s amazing how quickly the division has flipped.

Because while the debacle has been unfolding for the Brewers, the opposite has happened for the Cardinals. You’d be hard-pressed to find a better week for St. Louis in a long time.

St. Louis has won seven in a row, including all six since since the trade deadline, sweeping the Cubs and the Yankees. The Cardinals traded for two starting pitchers; Jose Quintana allowed just one hit in his brilliant six-inning debut, and Jordan Montgomery allowed just two hits in his five-inning debut, shutting out his former team — the Yankees — in that contest. And that’s the other thing: While the Brewers were losing two of three to the Reds, the Cardinals swept the Yankees, who entered the series with the best record in baseball.

Third baseman Nolan Arenado went 10-for-21 with three homers and eight RBIs vs the Cubs and Yankees — he was named the NL Player of the Week — and his cornerstone counterpart, Paul Goldschmidt, hit .389 with two homers and six RBIs. Oh, and long-struggling shortstop Paul DeJong has returned with a bang, after spending months in the minors and sparking questions of whether he’d ever wear a Cardinals jersey again. He had the biggest hit on Friday night — a two-run double in the eighth inning of a 4-3 victory over the Yankees — and provided some much-needed breathing room on Sunday, with his three-run homer in the eighth inning to put the Cardinals up, 12-8. They won, 12-9.

It’s not a coincidence, either, that the Cardinals are winning now that Yadier Molina is back after missing a few months with knee issues. He spent most of that time working his way back in his native Puerto Rico. St. Louis hasn’t lost in the six games since his return to the clubhouse, and the Cardinals are suddenly back where they have spent so many days during Molina’s 19 years with the club: first place in the NL Central.

What a difference a week — and one division-shattering trade — makes.

Watch Law & Order Online: Season 22 Episode 1
Vanessa Hudgens Styled a Chain-Mail Bandeau Top With 6-Inch Heels For Versace
Hilary Duff Wears a Zebra-Print Thongkini on Her Cabo Getaway
I Live in Boston, and I Can Confirm This Is My New Coat For Winter
9-1-1 Season 6 Episode 2 Review: Crash & Learn