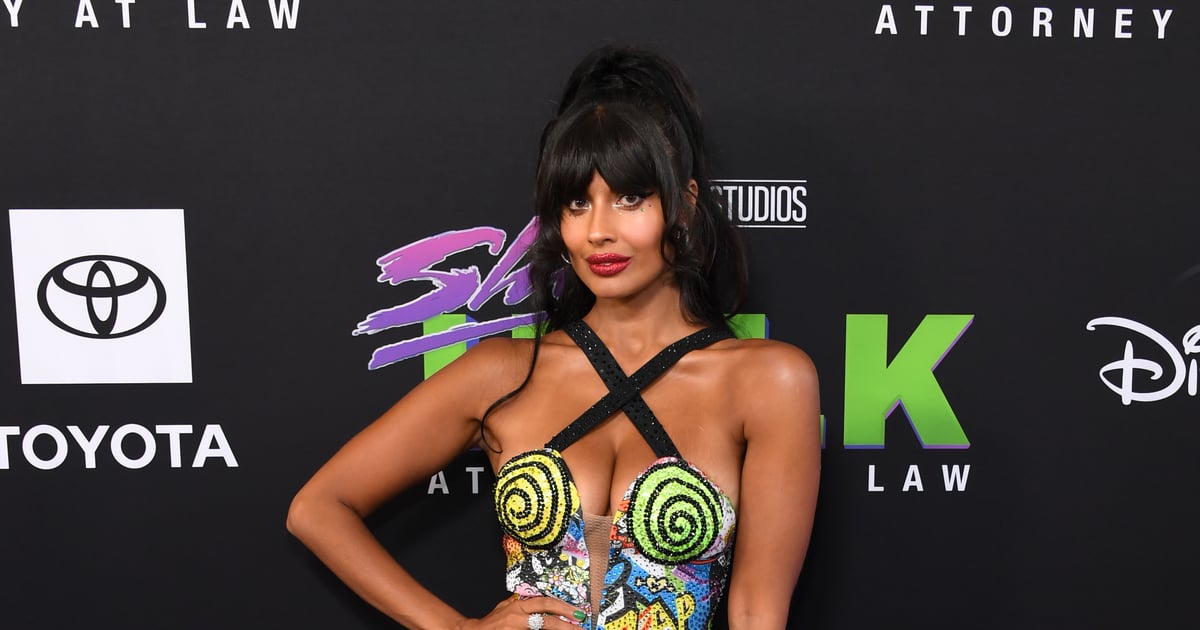 Jameela Jamil is bringing her Marvel character to the red carpet. On August 15, Jamil and the cast of “She-Hulk: Attorney at Law” gathered for the Los Angeles premiere of the upcoming Disney+ series, and Jamil’s dress immediately caught our eye. It was almost as if a comic book came to life and posed for fabulous photos. Jamil’s custom Monique Vee dress is covered in words like “BANG,” “WOW,” “BAM,” and “ZAP,” and other visual details like smiley faces and hearts. It features a cross-neck halter top and two hypnotizing spirals in green and yellow on the chest.

The low-cut dress is covered in crystal embellishments that bring the entire look to a new dimension. It also has a thigh-high slit, which allowed her black Christian Louboutin pumps to pop out. Jamil was undoubtedly leaning into the superhero theme, but her green manicure, which we can assume was a nod to the She-Hulk herself, was the cherry on top.

Jamil was styled by Law Roach, who commissioned the custom dress from Monique Vee right after she landed the role of supervillain Titania. “I haven’t had anywhere to wear it for 18 months. Tonight felt perfect,” Jamil wrote on Instagram following the premiere. “Even though my period cramps decided to start the second I hit the carpet. So thanks to the perfect dress for distracting everyone for me.”

She continued, “This Thursday prepare for a completely new take on Marvel. Packed to the brim with relatability, lols and thought provoking moments. And IF the feminism themes of our show annoy you, then this show is ESPECIALLY for you. We aren’t trying to attack people. Just say how it is unapologetically. See it as a challenge! I play [the] biggest misogynist in the show… which was wild. Man, what a ride this has all been. ❤️”

“She-Hulk: Attorney at Law” premieres on Disney+ on August 18. Check out photos of Jamil’s custom Monique Vee dress at the premiere ahead, which she appropriately described as “comic book chic.”