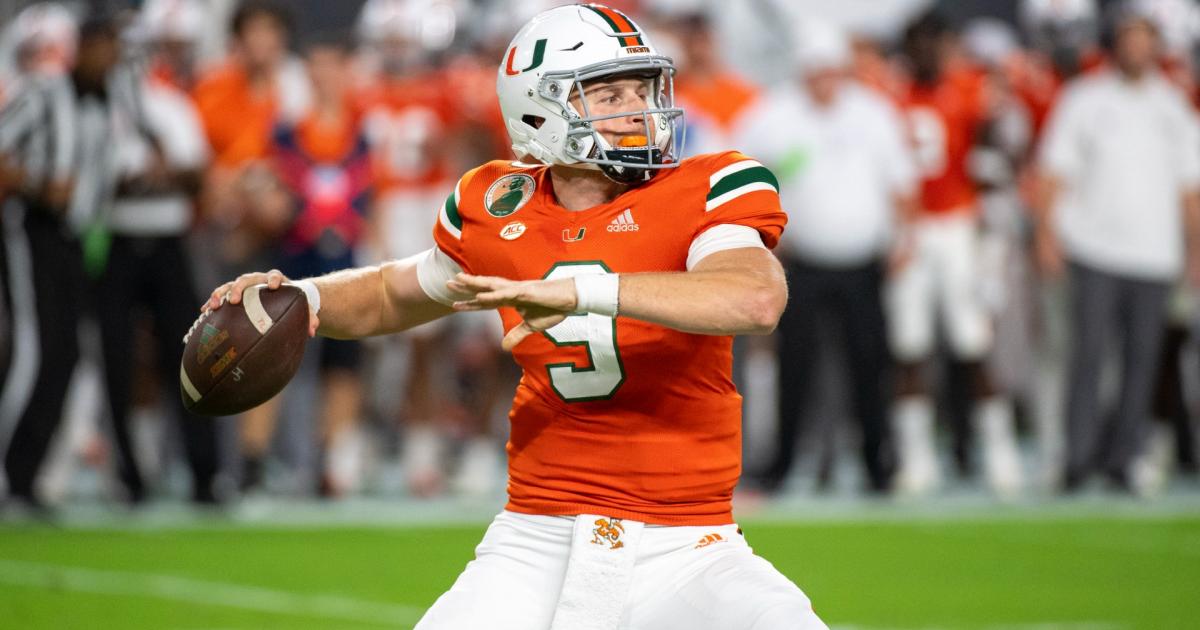 Week 3 of the college football season features two matchups between ranked teams and two rematches from last season that should draw interest.

No. 6 Oklahoma travels to Nebraska in the Big Noon Kickoff Game, and it will be interesting to see how the Huskers react after the firing of Scott Frost. The Sooners won 23-16 last season. No. 22 Penn State travels to Auburn in a matchup between 2-0 teams. The Nittany Lions won 28-20 last season. No. 12 BYU takes on No. 25 Oregon in the afternoon window.

The prime-time matchup is No. 16 Miami at No. 24 Texas A&M, which lost some luster after the Aggies’ shocking loss to Appalachian State in Week 2.

Each week, we will pick every Top 25 matchup against the spread. A look at our track record this season after a tough Week 2:

A look at this weeks’ picks:

Week 3 Top 25 picks against the spread

That is a large spread on the road, where the Gamecocks have split four games as a home underdog under Shane Beamer. The Bulldogs have won the past three at Williams-Brice Stadium by an average of 22.3 points per game.

Pick: Georgia wins 37-14 and FAILS TO COVER the spread.

The Wolverines get another giant spread against the Huskies. Michigan is averaging 53.5 points per game and J.J. McCarthy has won the starting job, but they have allowed a fourth-quarter TD each of the past two weeks. The Huskies have eight turnovers in three games. This will be right on the line, but that’s a lot of points.

Pick: Michigan wins 52-6 but FAILS TO COVER the spread.

The Sooners travel to Nebraska, where interim coach Mickey Joseph takes over for the remainder of the season. The Huskers’ defense allows 31.0 points per game, which isn’t going to be good enough against an old Big 12 rival. The Huskers will hang around for a half, but ultimately Oklahoma is a rude house guest and tacks on a late TD to secure the cover.

The Bobcats are 7-10 ATS as an underdog with Jake Spavital, and this is a huge spread against a Baylor team coming off a heart-breaking two-overtime loss at BYU. Baylor won 29-20 last year on the road. This spread just seems way too high.

Pick: Baylor wins 40-17 but FAILS TO COVER the spread

The Cougars’ schedule is ridiculous. This week, the show continues at Oregon. The line has bounced all around from its open at -6.5, but it’s trending back toward the Ducks. These teams haven’t played since the 2006 Las Vegas Bowl. This will be a down-to-the-wire-game.

Lane Kiffin brings the Rebels’ offensive machine — which averages 43.5 points per game — to Bobby Dodd Stadium. The Yellow Jackets are 4-10 ATS as a home underdog under Geoff Collins. It’s up a touchdown from where it opened in the offseason. Zach Evans and Quinshod Judkins both have big games on the ground.

This is a prove-it game for the Nittany Lions, and they will have to protect the football at one of the SEC’s toughest road venues. Which quarterbacks do you trust more? Sean Clifford and Drew Allar? Or TJ Finley and Robby Ashford? The Nittany Lions are 5-5 in their last 10 games, so it’s a 50-50 coin flip here. They are still the better team.

Louisiana-Monroe beat Alabama 21-14 in Saban’s first season in 2014. The Crimson Tide hasn’t lost a non-conference regular-season game since, and you can expect them to be more focused after the 100 yards in penalties against Texas. It’s still a high spread, but we’ll lean toward the blowout to get back on track.

The Demon Deacons average 44.5 points per game, and Sam Hartman threw four TDs and averaged 11.4 yards per attempt in his return in Week 2. Wake Forest can’t afford to look ahead to Clemson here. Hugh Freeze has a solid team, but they might be able to keep up in the second half.

Ohio State plays another MAC opponent in a prime-time game at Ohio Stadium. The Rockets kept the last meeting close in a 27-22 loss in 2011, but the Buckeyes’ offense simply has too many weapons. The Buckeyes are 0-2 ATS this season. That changes this week with the Big Ten opener against Wisconsin looming.

This could turn out to be one of the most fun games of the weekend. The Red Raiders are 2-0 under new coach Joey McGuire. Texas Tech has lost in its past two visits to Carter Finley Stadium by an average of 31.5 points per game, but this one feels like it could be a shootout between Donovan Smith and Devin Leary.

The Zips are bad, and they are coming off a 52-0 loss at Michigan State. The Vols can pick their score here, but the only question is how soon they will pull off knowing that Florida is on the schedule in Week 4. The starters sit the fourth quarter, and the Zips get a back-door cover.

Pick: Tennessee wins 56-9 and FAILS TO COVER the spread.

The Spartans haven’t been tested yet, but a cross-country flight to Husky Stadium should do the trick. Washington is improved with Michael Penix Jr. at quarterback. Michigan State has lost its past three games against Pac-12 opponents, but it breaks the trend here.

Western Michigan beat Pitt last year, and the Panthers are coming off an overtime loss against Tennessee. Pitt quarterbacks Kedon Slovis and Nick Patti also are nursing injuries. Despite all that (and the road trip), the Panthers get back on track with a victory.

This line has stuck, and the Gators need to bounce back after a reality check against Kentucky. Anthony Richardson was a role player in last year’s 42-20 victory against the Bulls. South Florida is 10-8 ATS as an underdog under coach Jeff Scott, and there is a bit of a hangover risk here for the Gators. Of course, South Florida allows 35 points per game. This is a tough one to pick.

Pick: Florida wins 47-24 and FAILS TO COVER the spread.

The Roadrunners have played shootouts against Houston and Army the past two weeks, and they can score around play-making quarterback Frank Harris. Hudson Card is back at quarterback for the Longhorns, and we’re comfortable as long as that spread stays under 14 points.

The Tigers are getting the big spread against the Bulldogs, who will air it out with new coach Sonny Cumbie. The Bulldogs have two quarterbacks in Parker McNeil and Parker Downing, but they won’t have much success against the Tigers’ defense. Clemson uses this one to get a running game that averages 3.9 yards per carry going.

Pick: Clemson wins 45-13 and FAILS TO COVER the spread.

This line has plummeted down to six points, a sign of a lack of confidence in the Aggies after their loss to the Mountaineers. The difference? Miami has its quarterback figured out. Tyler Van Dyke has completed 73.3 percent of his passes through two games, and that efficiency travels. This line could drop more before kickoff. Grab it now.

This spread continues to swell, and the Utes will be out for revenge after losing 33-31 to the Aztecs last season. The Utes are in win-out mode after the loss to Florida, and that showed in a 73-7 victory against Southern Utah last week. Still, the Aztecs get enough on the ground to squeak out a cover.

USC’s offense is getting all the attention with Lincoln Riley, but the defense has created nine turnovers in two games. The offense? It’s an efficient machine with Caleb Williams at quarterback. Fresno State pushed Oregon State in a heart-breaking 35-32 loss last week. This line opened at 16 points. Take the value in the Trojans.