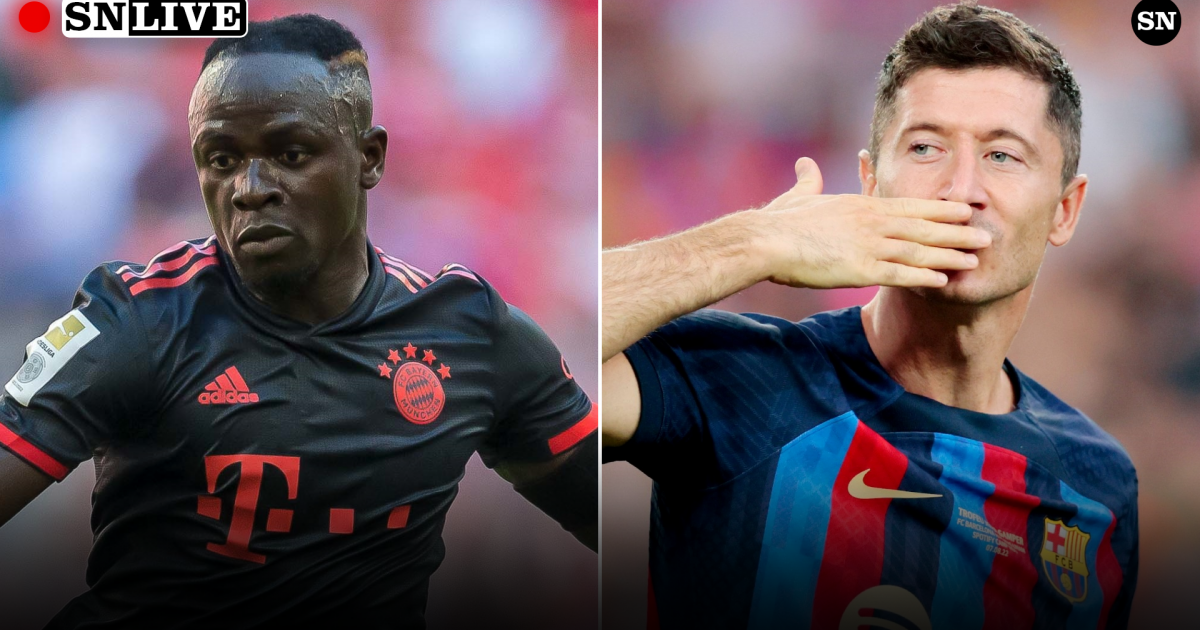 An in-form Barcelona side travels to Germany for a marquee Champions League meeting with Bayern Munich in Group C, otherwise considered this season’s Group of Death.

Bayern downed Inter Milan on the road last week, while the Blaugrana topped Viktoria Plzen, meaning these two teams are primed to challenge for the top spots in the group.

Robert Lewandowski returns to his former stomping grounds at the Allianz Arena, where he spent eight seasons. The Polish international forced his way out of Bayern this past summer for a move to Barcelona, making for a contentious end to his wildly successful tenure at the club.

Barcelona are in spectacular domestic form, with just a scoreless draw to start the year as the only blemish. Bayern, meanwhile have drawn three straight Bundesliga matches, posing plenty of questions prior to one of their biggest early season tests.

The Sporting News will be following the Bayern-Barcelona match live and providing score updates, commentary and highlights as they happen.

33rd min: Bayern fans unveil a tifo in the supporter’s end that takes aim at the Premier League cancelling matches in the aftermath of Queen Elizabeth’s passing.

31st min: Chance, Bayern! It’s the first big chance for the hosts, as Leroy Sane cuts inside and feeds Marcel Sabitzer, but the Austrian fires wide himself. Another big miss in this game!

Barcelona were screaming for a foul in the build-up, with Busquets spilled on the ground in midfield.

28th min: Chance, Barcelona! The visitors have another big chance, but again come away with nothing. Lewandowski tees one up for Raphinha at the top of the 18-yard box, but the Brazilian rifles his low effort just shy of the right post.

Barcelona have been the better side through the opening half-hour, but will they rue these misses?

21st min: Chance, Barcelona! ANOTHER BIG SAVE BY NEUER! Ousmane Dembele down the left feeds a spectacular diagnoal ball to Lewandowski who comes close again, setting himself up with one touch with the shot on his second, but he’s once again denied by his old teammate!

Noussair Mazraoui comes on to replace Pavard, who probably shouldn’t have been allowed to continue in the first place.

19th min: Marcel Sabitzer picks up a yellow for a challenge with Sergio Busquets. It’s a bit of a harsh one, as Sabitzer was the one who went to ground first in what appeared to be a true 50/50 challenge, but Busquets came out worse ending up taking a cleat to the ribs.

In the aftermath, Pavard comes off the field, clearly struggling from his early clash with Alonso.

18th min: Chance, Barcelona! A miss from Lewandowski! The former Bayern man roasts the home defense with brilliant skill to get free, but he pokes a ninja-kick shot over the bar. It’s an effort of the highest degree of difficulty, but one that Lewandowski has converted before.

Watch in the USA:

15th min: Oh my, Manuel Neuer makes a horrible and rare mistake on the ball, scuffing a pass right to Lewandowski, but Dayot Upamecano makes a brilliant recovery to block his entry feed. You don’t see that from the Bayern legend too often!

Thomas Muller: 🗣 “For the past ten days. Sadio Mané has been joking with me to be careful not to accidentally pass the ball to Robert Lewandowski”

13th min: This has been a brilliant match so far between two title-caliber teams. The level of play is of the highest quality, with great passes, better tackles, and top saves already through the match’s opening stage. Buckle up!

Can tell already that the level of this game is so high. Unbelievable technicians all over the pitch.

One excellent matchup that proves to be a match-long battle is Alphonso Davies vs. Raphinha.

9th min: Chance, Barcelona! WHAT A SAVE Manuel Neuer! Just as we say that Barcelona were wilting under the early Bayern press, some pressure of their own results in a break. Lewandowski down the right flicks into the middle to start a great passing move, eventually falling to Pedri who has a wide open sight on net. The young midfielder rips a left-footed shot, but the Bayern veteran produces a better save, flicking his leg out against his body’s momentum to keep the shot out. Kick save…AND A BEAUTY.

Watch in the USA:

8th min: The Bayern press has been VERY good, turning Barcelona over a few times in dangerous areas and with numbers on the counter. The final third product hasn’t been there quite yet, but it feels like it’s coming.

5th min: Benjamin Pavard takes a while to get up after a hard crash into Marcos Alonso. Pavard headed a ball on a Bayern counter and his momentum carried him into the new Barcelona full-back. No malicious intent at all, but it looked a nasty one. The French international is up eventually and ready to continue.

2nd min: An early mistake by Barcelona gifts Sadio Mane the ball at the top of the penalty area, but the Spanish side tracks back well to hound the new Bayern man, and his feed for Musiala is off the mark to end the chance. Naglesmann had said before the match he wants to see Mane be more selfish in front of goal.

1st min: Barcelona get the match under way at the Allianz Arena! The two captains, Sergio Busquets and Manuel Neuer, are as battle-tested as they come. Who will lead their team to a critical Champions League victory?

20 mins to kick: Robert Lewandowski has seen plenty of matches as an opponent at the Allianz Arena, having played for Borussia Dortmund before switching sides in Der Klassiker, but he has not scored against Bayern in the Champions League, coming up empty in his first and only attempt — the 2013 Champions League final.

Nobody has scored more goals in Barcelona’s first six La Liga games since 1956. An incredible start to the season.

4 – Robert Lewandowski 🇵🇱 could become the 4th player to score for and against Bayern in the #UCL, after Giovane Élber 🇧🇷, Roy Makaay 🇳🇱 and Lukas Podolski 🇩🇪. This will be his 1st game at the Allianz Arena as an opposition player since Apr 2014 (3-0 win for B. Dortmund). Return. pic.twitter.com/a78DfFzaVm

30 mins to kick: Barcelona enter the field for warm-ups to a rousing chorus of boos from the German home faithful, until the Polish international applauded the Bayern fans, to which the reception sharply changed.

It’s notable to see what kind of reception former Bayern striker Lewandowski receives throughout the match today. He won the gamut of trophies at the Bavarian club, but left in unceremonious manner as he forced his way out.

Lewandowski then changed this by clapping the crowd – at which point they all clapped.

36 mins to kick: Much is being made of an especially tall Barcelona starting lineup against Bayern tonight. Ronald Araujo and Andreas Christensen are both 6’2″ and proven aerial presences.

Quite a tall Barca team.

That will be fascinating to see matched up against Bayern starter Dayot Upamecano, who has struggled in aerial duels this season.

👀 Dayot Upamecano starts for Bayern vs. Barcelona. He’s won 31% of his aerial duels this year.

Check out a full betting preview of this Bayern Munich vs. Barcelona match before things get kicked off.

60 mins to kick: How bout the shiner on Josh Kimmich’s right eye? He got it in a friendly-fire clash with Marcel Sabitzer a few days ago. Looks good on the German international.

75 mins to kick: Bayern have their lineup out early as well, and Dayot Upamecano starts at center-back alongside Lucas Hernandez, with Matthijs de Ligt on the bench. Marcel Sabitzer returns to the midfield after being rested over the weekend, while bright young talent Jamal Musiala is deployed in the attack.

Sitting Upamecano instead of de Ligt is an interesting call from Bayern boss Julian Nagelsmann. Upamecano has won just 31 percent of his aerial duels this year in Bundesliga play, and Lewandowski is an aerial threat in front of goal.

86 mins to kick: Barcelona have released their lineups significantly early. For the visitors, Andreas Christensen and Jules Kounde are entrusted with the defensive duties, while Marcos Alonso makes his first Barcelona start in a very big spot. Ronald Araujo earns the start at right-back over Hector Bellerin.

120 mins to kickoff: Bayern Munich sporting director Hasan Salihamidzic asked fans not to boo Lewandowski, as he “won everything with us,” but it will be interesting to see if the Bavarian faithful feel similarly loyal to a player who barged his way out of the club.

Either way, the 34-year-old is a Barcelona player now, and he’s off to a flying start, bagging a hat-trick in his Champions League debut for the club against Viktoria Plzen last week.

Striker Sadio Mane was rested against Stuttgart, coming off the bench for a nine-minute cameo at the end of the disappointing draw.

The defensive pairing of Matthijs de Ligt and Dayot Upamecano has struggled at times to start the year, and it’s Lucas Hernandez who comes in for this match in place of de Ligt. Benjamin Pavard and Marcel Sabitzer are also back in the lineup as well, while young Jamal Musiala is part of the attack in place of Serge Gnabry.

Xavi has so many options on this incredibly deep roster that picking a likely lineup each match is difficult, but it figures to look similarly to the previous Champions League win over Viktoria Plzen.

New defensive signing Marcos Alonso made his debut over the weekend against Cadiz and now makes his first Barcelona start, while fellow new man Hector Bellerin heads to the bench after starting over the weekend. In the rest of defense, it’s Jules Kounde on the right plus a center-back pairing of Ronald Araujo and Andreas Christensen, with Gerard Pique, Eric Garcia, and Jordi Alba all available as substitutes.

UK: The Champions League group stage match between Bayern Munich and Barcelona will be televised on BT Sport 4, and can be streamed on both the BT Sport app and website.

USA: In the United States, the Group C match will be televised on Spanish language channels Univision and TUDN, which are available to stream via fuboTV. Additionally, the match will be streamed in English on CBS’s subscription-based platform Paramount+ and on the Univision Spanish-language streaming service ViX+.

Canada: Every Champions League match all season long is streamed via DAZN.

Australia: Every Champions League match all season long is streamed via Stan Sport.

Just based purely on form, these lines don’t quite make sense. Since a season-opening scoreless draw in La Liga play, Barcelona have pummeled everyone in their path, while Bayern Munich have struggled in the Bundesliga.

And although Bayern’s attack is one of the world’s best, it hasn’t been able to make up for the deficiencies seen at the back, where Bayern are struggling defensively.

Backing Barcelona to win outright at the given odds jumps off the board as they look to snatch control of a brutal Group C that’s up for grabs.