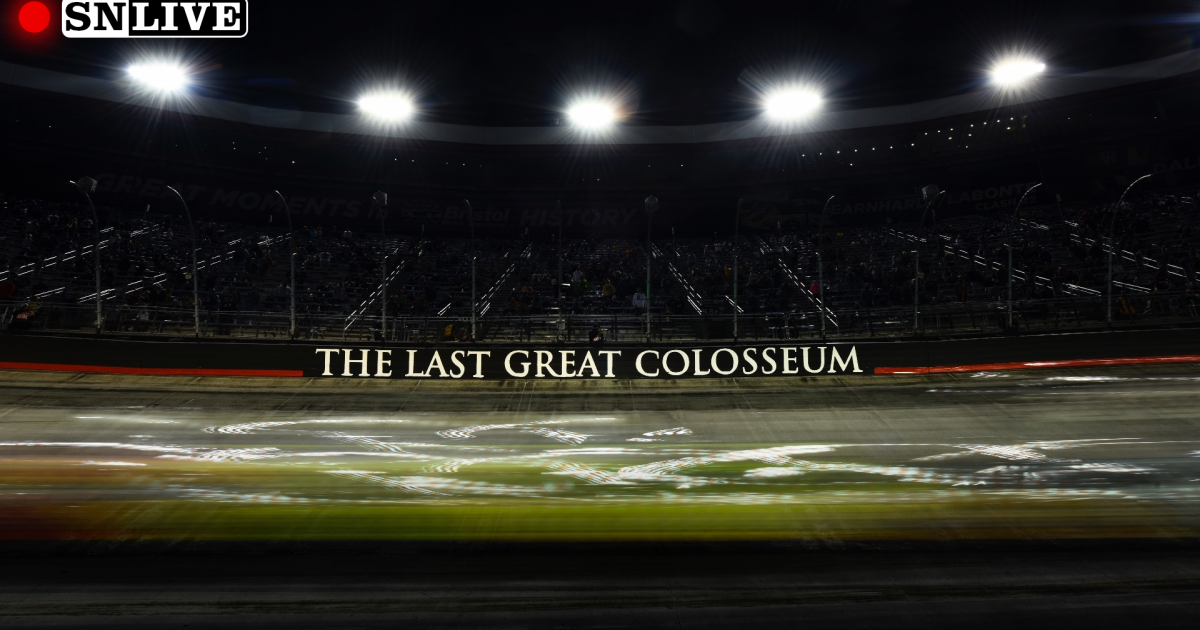 With just one race remaining before the NASCAR Cup Series playoff field is cut from 16 drivers to 12, the pressure is on as those drivers chase one of motorsport’s most hallowed pieces of hardware.

And what better place to compete than the Last Great Colosseum?

From Dale Earnhardt and Terry Labonte’s classic battles on the concrete oval to Darrell Waltrip’s unprecedented success at the venue to today’s stars excelling, Bristol Motor Speedway is steeped in history and is one of the most challenging sites in stock car racing.

Who will add their name to the track’s legacy? Only time will tell. But one thing is certain as we approach the next chapter of Cup Series competition: Saturday’s 500-lap race will be highly competitive.

The playoff field wouldn’t have it any other way.

The Sporting News is tracking live updates, highlights and results from the Bass Pro Shops Night Race at Bristol. Follow all the action here.

9:36 p.m.: Busch into the wall! That’s another caution flag waved. Looks like his engine is leaking. He’s done for the race and likely done for the Cup Series playoffs.

9:24 p.m.: With three laps to go, Bell is looking in solid position to pick up the stage win.

9:23 p.m.: The race is restarted and it’s Christopher Bell who takes the lead. Ross Chastain in second place. Kyle Busch also competing atop the front of the pack. He’s currently in a playoff spot.

9:15 p.m.: Suarez and Tyler Reddick are dovetailing between 12th and 13th place. That’s the difference between a spot in the Round of 12 and getting cut from the playoffs.  One to watch, for sure.

Truex out of race. Mechanical.

9:01 p.m.: Caution flag waved after Burton suffers his third front flat of the race. Seems the No. 42 car tried to avoid Burton’s car, which left Erik Jones’ No. 43 car in rough position.

8:58 p.m.: Wallace is headed to pit road! He had ran a fairly clean first 180 laps or so, but his power-steering started failing him. His pit crew took his tire off and it was sopping in fluid. Looks like he’s having some issue under the hood.

8:56 p.m.: Important to note: Blaney is 25 laps down. It will be an uphill climb for him to get a half-decent showing at Bristol.

8:53 p.m.: Buescher is in the front of the pack 40 laps through Stage 2. Harvick in second place, putting together a far better display than in Stage 1.

8:43 p.m.: Caution flag waved once more! It’s for Harrison Burton again, who is headed to pit road after spinning out on the bend.

His right front tire is flat again. Something’s been fishy with these Ford cars and their tires so far.

8:42 p.m.: The green flag is waved for Stage 2 and we’re off once more! Buescher holds the lead early, followed by Harvick and Hamlin.

8:35 p.m.: Keselowski holds on to take Stage 1! That’s his first stage win of the season, and he did it without heading to pit road.

Meanwhile, Blaney is headed back to pit road. He’s got a flat back right tire, suspension issues and the back of his car has pretty much dragged for the past 20 laps or so. He’s probably going to need to head to the garage.

8:31 p.m.: Blaney is in serious trouble. Sparks are emanating from the back tires. Looks like he’s headed to pit road on the green flag. Blaney’s spot in the Round of 12 is in serious jeopardy.

Keselowski still holds the lead through 106 laps. Busch with a fantastic race restart to get himself into third place.

8:24 p.m.: Blaney’s team is likely going to be penalized after his right front tire rolls way down the track.

Blaney pits and then loses a wheel on pit road. That likely will be a four-race suspension for crew chief, tire changer and jackman.

Blaney’s issues should offer a lifeline for the likes of Kevin Harvick, who entered today 35 points away from safety.

8:20 p.m.: Austin Cindric is headed to pit road on the green flag! Huge setback for Cindric, who entered the race outside the playoff cut line.

The rookie is now three laps behind the leader Keselowski. Not great. Seems he’s also unable to communicate with his pit crew. This is less than ideal.

8:16 p.m.: Almirola has a steering issue, which he has reiterated to his team via driver radio. Could certainly explain his slide — the No. 10 car is now in sixth-place.

8:14 p.m.: Old tires currently holding on well through the first 66 laps for Keselowski, Buescher and Wallace. They still hold the top three places.

8:10 p.m.: Green flag is out once more. Brad Keselowski, Chris Buescher and Bubba Wallace are setting the pace early.

Suarez is struggling so far. Seems his car isn’t handling well. He’s going to have to put together a big effort to qualify at the moment.

8:00 p.m.: Daniel Suarez and Austin Dillon already in dangerous position to get lapped by race leader Almirola. That’s a problem given both entered Saturday just over the cut line.

Through 30 laps, Busch and Briscoe are into the next rounds of the playoffs.

7:58 p.m.: Despite sitting 72 points over the cut line, Blaney is showing no signs of slowing down. He’s already gotten tight with Briscoe. Now, he’s going back and forth with Hamlin for second place. Eye-catching stuff.

Ryan Blaney wouldn’t let him get the pass through, though. Might be an indication of just how tight this race may be.

What time does the NASCAR race start?

What channel is NASCAR on today?

The Bass Pro Shop Night Race will be broadcast live on USA Network in the U.S.

The race from Bristol Motor Speedway will be streamed live on Peacock. Viewers can also watch with fuboTV, which offers a free trial.