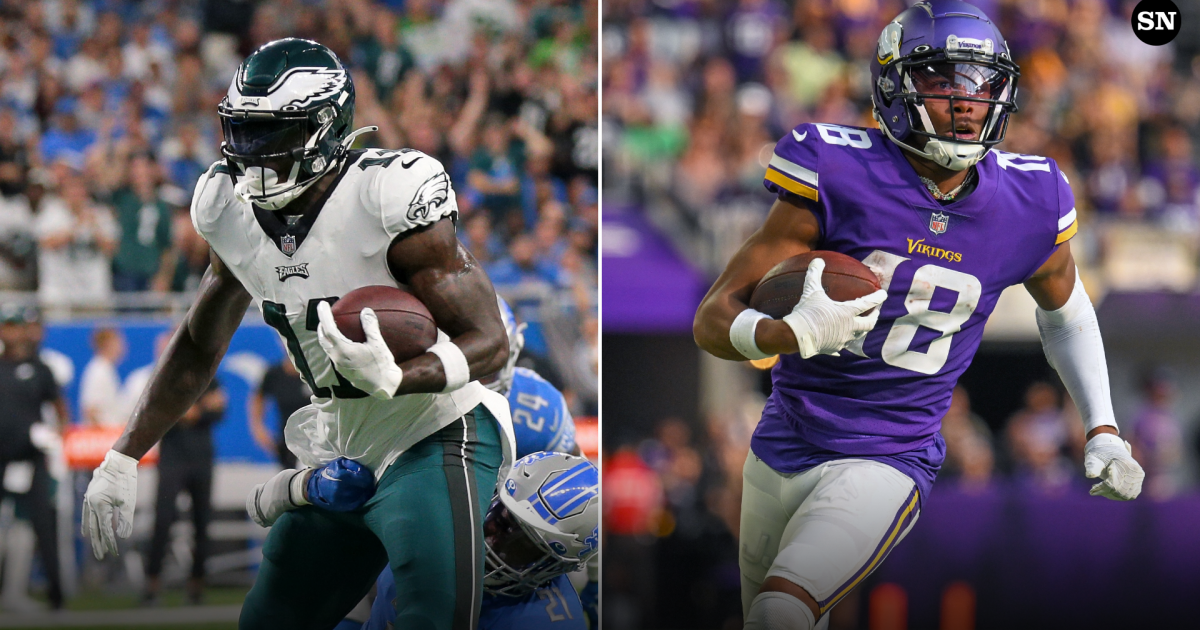 When the Vikings play the Eagles, you might want to keep your eyes on the pass-catchers.

Lining up at the X for Minnesota will be Justin Jefferson, perhaps the league’s best wide receiver. The spindly Jettas is a superstar in every sense of the word — a touchdown-scoring, griddy-dancing talent who has been dominant in his short career. Jefferson wants 2,000 receiving yards this year. It’s hard to say he can’t hit that mark, especially after he torched Green Bay’s secondary for nearly 200 in Week 1.

Philly has its own star to snag passes out of the air: newcomer A.J. Brown. Brown’s arrival gave Jalen Hurts something he so desperately desired — a true No. 1 option. Brown is certainly being paid like one.

Brown put up 155 receiving yards against the Lions, making easy work of an improved defensive back unit. With his mammoth frame and soft hands, Brown looks well on his way to a career season. That should thrust him into the upper echelon of wideouts, a place Jettas knows very well.

What do you get when you put two of the most talented receivers in football on the field with one another? Fireworks. Expect to see plenty of highlights at Lincoln Financial Field in Philadelphia Monday night.

Here’s what you need to know to watch Jefferson, Brown and their respective teams clash on Monday night.

What channel is Vikings vs. Eagles on today?

For those hoping to stream the game, the ESPN+ streaming service is offering the game with a subscription. Fans can also view the game on fuboTV, which carries ESPN and ABC and offers a free trial.

What time is Vikings vs. Eagles on today?

Vikings vs. Eagles will kick off at 8:30 p.m. ET on Monday, 15 minutes later than the typical slot for “Monday Night Football.” The ABC broadcast will start a little over an hour after Monday night’s Titans-Bills game kicks off.

ABC will occasionally go double box to show a live feed from both games. Scott Van Pelt will serve as middle man, spotlighting key moments in each game.

ESPN will host a two-hour “Monday Night Countdown” where analysts will highlight some of the earlier matchups of the week and make their pregame picks.

The Vikings vs. Eagles game will be broadcast on ABC. That means it will be available to stream on the ESPN app, as well as ESPN+ (with a subscription).

Cord-cutters can access “Monday Night Football” with fuboTV, which carries ESPN and ABC and also offers a free trial. FuboTV also carries CBS, Fox, NFL Network and NBC, so users can find most of the locally broadcast NFL games on there.

Other streaming options for Vikings vs. Eagles are as follows: