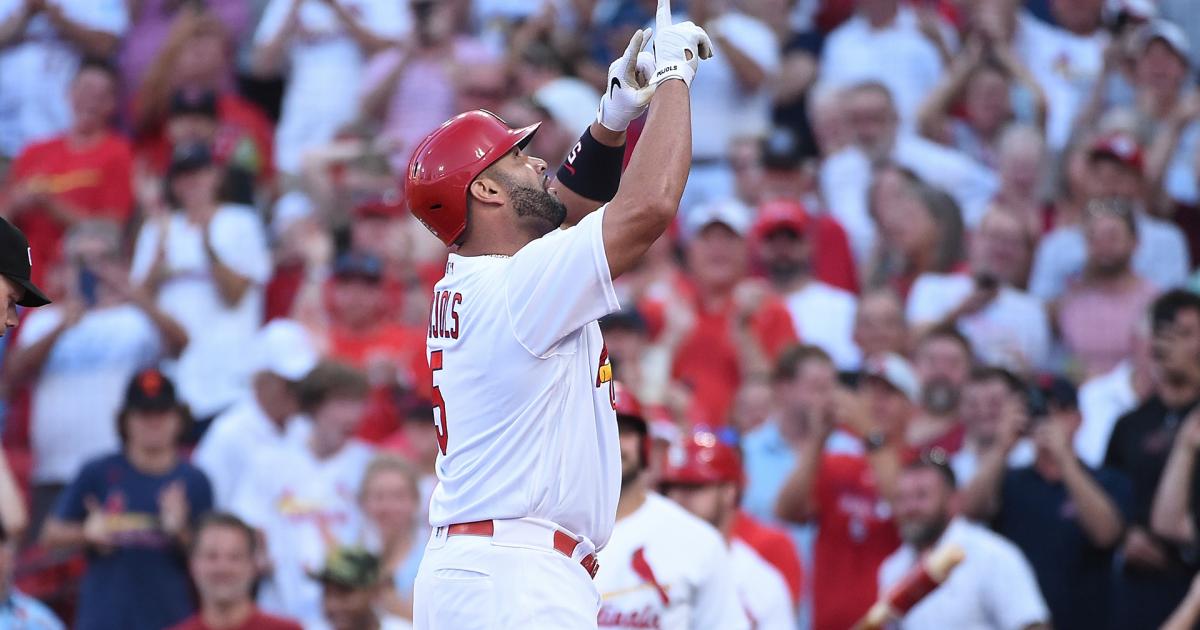 The Machine has lived up to his nickname in the second half of the 2022 MLB season.

After signing with the Cardinals before this year for one last ride, Albert Pujols looked like a legacy player in the first half of the year. But since the All-Star break, Pujols has become more than a figurehead for the Cardinals. He’s a viable platoon hitter, and it’s translated to a legitimate shot at 700 career home runs.

Indeed, Pujols has 13 home runs since All-Star Weekend, putting him at 698 for his career, fourth on the all-time list. He had just six in the first half of the year, but a surprising showing at the Home Run Derby in which he beat NL leader Kyle Schwarber in the first round was an omen of things to come.

Will Pujols get to 700? Only time will tell, but the Cardinals’ Oliver Marmol has helped to put the 42-year-old slugger in a position to succeed.

How many home runs does Albert Pujols have?

Albert Pujols is now sitting at 698 home runs in his career, just two off from making it to the hallowed 700 club and fourth in MLB history.

Pujols passed Alex Rodriguez, who retired with 696 home runs, on Sep. 11 with a homer in Pittsburgh. He would hit No. 698 five days later against the Reds.

In another testament to his longevity, Pujols has never had a 50-plus home run season. He will retire with as many 40-plus home run seasons as Ken Griffey Jr. at seven, one off Barry Bonds’ number at eight. Pujols hit 49 homers in 2006 and he led the league in homers once, in 2009 when he hit 47.

Heading into Tuesday, Pujols and the Cardinals have 14 games left this season. Here’s a look at their upcoming schedule, along with the home run factor of each ballpark the Cardinals will be playing in.

Pujols is already near the top of a remarkably exclusive list, as he looks to become the fourth player in MLB history to hit 700 home runs. The Machine has already secured the No. 4 all-time spot, but joining the 700 club would be even more special.

Who was the first player to hit 700 home runs?

Ruth paid $20 to reclaim his 700th home run ball. One has to imagine if Pujols hits the milestone the cost will be a bit steeper.

Pujols is seeking to become the second player in MLB history join the 3,000-hit and 700-home run club.

Hank Aaron is the only other player in that club, having finished with 755 homers and 3,771 hits (third all time behind Pete Rose and Ty Cobb).

Barry Bonds finished with 2,935 career hits whereas Babe Ruth retired at 2,873. Alex Rodriguez would have joined that part of history, but he retired four homers off the mark.

What are Albert Pujols’ second half stats?

To understand how Pujols has even climbed this close to 700, one needs to look at how he’s been used.

Pujols has become an elite-tier platoon hitter, mostly in the second half of the season. Although he’s mostly getting looks against left-handed pitchers, however, Marmol — seemingly understanding the gravity of the chase — has been using Pujols in two out of every three games as a DH.

With that in mind, Pujols certainly has a chance, but whether or not he hits it will depend a little bit on luck. The Cardinals are still in the midst of a playoff run, and they’re gunning for a World Series. The other side of that, however, is that their 8.5 game lead over the Brewers heading into Tuesday should allow Pujols the opportunity to see more chances with the division well in hand.