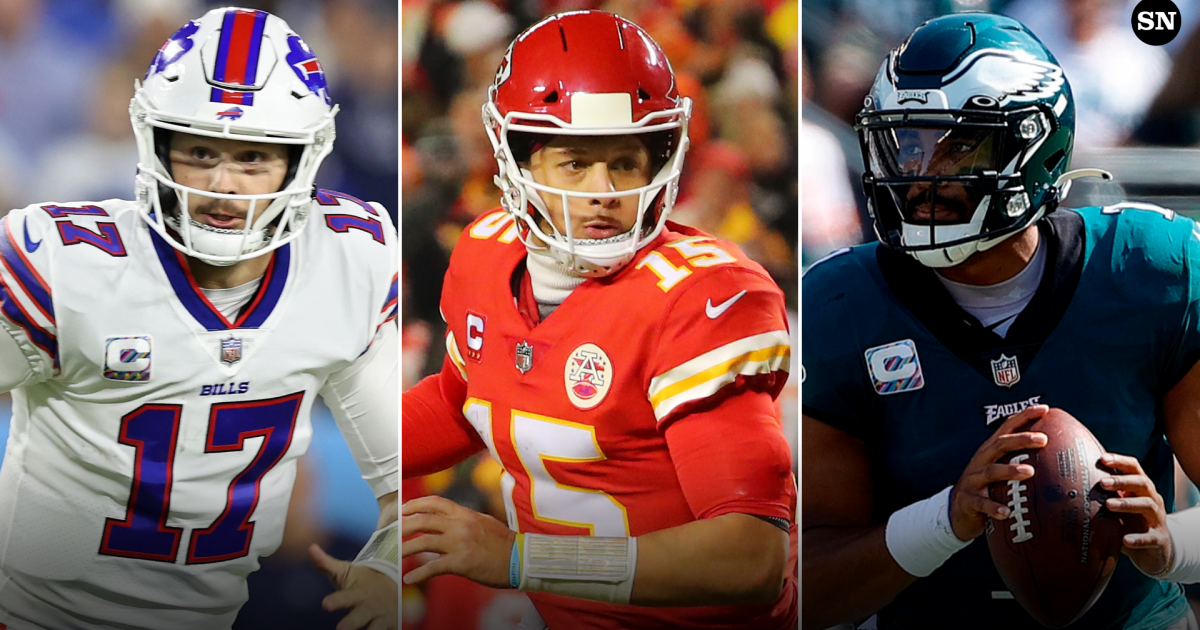 The NFL’s MVP award has become synonymous with the league’s best quarterback over the past decade. The previous nine MVP award winners all played QB, with Minnesota’s Adrian Peterson serving as the last non-QB to win the award in 2012. As such, it’s no surprise that QBs like Josh Allen, Justin Herbert, and Patrick Mahomes had the shortest preseason odds to win the 2022 NFL MVP.

Through the first week of the season, the top-15 players in the 2022 MVP odds are all quarterbacks. It’s becoming more difficult for oddsmakers and the betting public to make a case for a non-QB to win the award. There are some decent sleeper/long-shot non-QB candidates (Justin Jefferson, Derrick Henry, Christian McCaffrey), but your money is almost always better spent on a signal-caller.

When Adrian Peterson won the award in ’12, he had 2,097 rushing yards on 348 carries and 12 touchdowns. That year, Peterson beat out Peyton Manning, who threw for 4,659 yards, 37 touchdowns, and 11 interceptions. As you can see, for a non-QB to win the league’s MVP, they have to do something incredible. Peterson was also the last winner to be on a team that didn’t finish first or second in its conference. Clearly, winning can trump stats in this QB-dominant era.

Last season, there was a slight chance that a non-QB could’ve won the award, as Cooper Kupp and Jonathan Taylor had outstanding seasons for their respective teams. Kupp finished third in the voting behind Tom Brady and Aaron Rodgers after winning the league’s triple-crown for receiving with 145 receptions for 1,947 yards and 16 touchdowns. Taylor did not finish in the top three of voting but had an outstanding season for a running back with 2,171 total yards and 20 total TDs on 372 touches, but it still wasn’t enough to even sniff the trophy.

Heading into Week 3 of the regular season, the top-three favorites to win the league’s MVP have changed quite a bit. Last week, Mahomes was the favorite to win at +450, but that moniker now goes to Josh Allen. The Bills’ star quarterback is now the favorite to win the award at +300. Allen’s odds heading into Week 2 were +550, but he had an impressive performance on Monday Night Football (317 passing yards and four touchdowns).

Mahomes has second-best odds at +450, but Jalen Hurts moved up into the third spot (+800) after what he did on Monday Night Football against Minnesota. Hurts had 14/1 odds heading into Week 2 but improved those odds with 390 yards of total offense and three total touchdowns.

Hurts wasn’t the only quarterback who saw his odds improve after Week 2 as Tua Tagovailoa went from +4000 to +1800. Tagovailoa outdueled Lamar Jackson in a high-scoring affair that saw the Dolphins win 42-38. Tagovailoa threw for 469 yards, six touchdowns, and only two interceptions. He will have a chance to improve his MVP odds again on Sunday against Allen and the Bills.

For non-QBs, Jefferson and Taylor have the shortest odds to win MVP (+6000) after quiet performances in Week 2. Titans’ RB Derrick Henry saw his odds drop from 60/1 to 80/1 (+8000) after rushing for 25 yards on 13 carries and a touchdown in Week 2. However, Bills WR Stefon Diggs was one of the notable longshot risers as his odds moved from +20000 to +10000. Diggs went off against the Titans for three touchdowns in Week 2 and could be due for another big week against the Dolphins’ secondary.

Below, we’ll provide a snapshot of where the MVP odds stand and who provides the most value heading into Week 3.

All odds courtesy of Caesars Sportsbook

Catherine, Called Birdy
Serena Williams Tells Bradley Cooper She “Definitely Can Still Come Back” to Tennis
Emily in Paris Season 3: First Look!
11 White Boots You Can Wear With Anything in Your Closet
The Bachelor’s Nick Viall Gives His Hot Take on Adam Levine Cheating Allegations