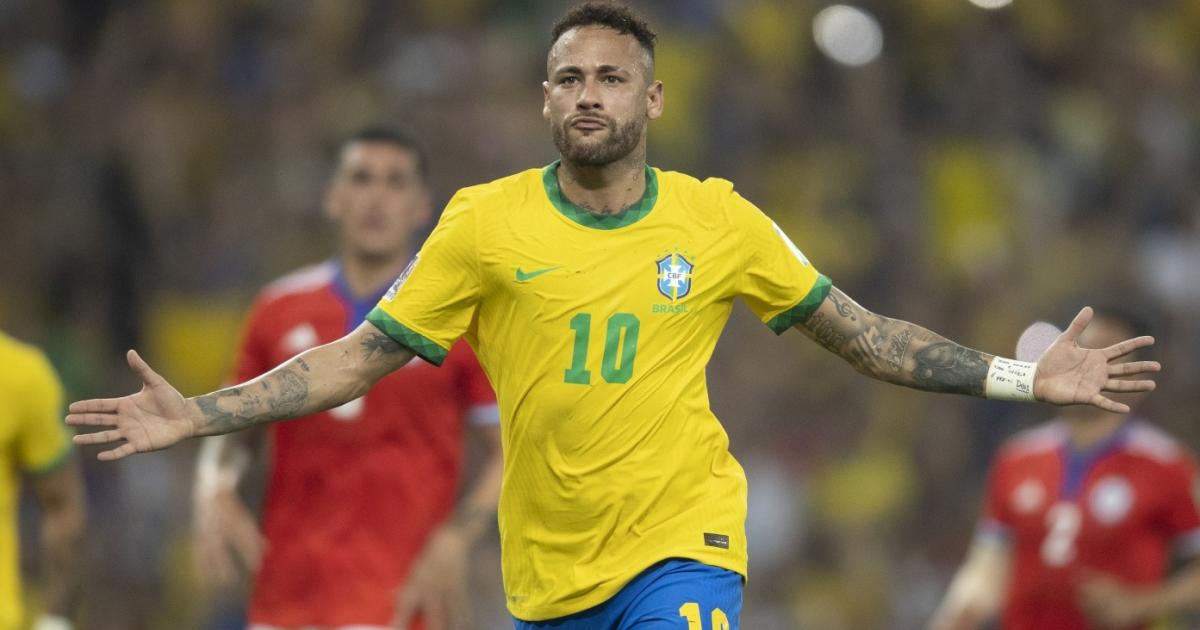 In case you didn’t already know, Brazil are the No. 1 team in the world and the favorites to win the World Cup. And they showed why in a 5-1 win over fellow World Cup participant Tunisia at the Parc des Princes in Paris.

The African side hadn’t conceded a single goal in seven straight matches and they found themselves down 4-1 and down a man after a straight red card for a foul on Neymar.

Raphinha had two goals, Neymar scored on a penalty, and Richarlison also found the back of the net. During Richarlison’s celebration, video surfaced of a banana tossed in the player’s direction from the pro-Tunisia crowd.

That racist gesture came on the heels of global headlines made by the racism endured by Brazil’s Vinicius Jr. while in Spain with his club team Real Madrid.

Brazil weren’t done, adding a fifth goal in the second half through backup forward Pedro. Tunisia, the No. 30 team in the world which at one point leveled the score at 1-1, only had a handful of attacks in the second half as Brazil managed the rest of the match.

The Brazilians will kick off their participation in the World cup with a Group G match against Serbia on Nov. 24. Tunisia opens on Nov. 22 against Denmark in a Group D match.

77th min: Chance Brazil! They’re not done. Casemiro wanted to get in on the act and nearly beat the ‘keeper low.

74th min: Goal Brazil! The ball finds its way to an unmarked Pedro who knows exactly what to do with the first-time volley past the Tunisian ‘keeper. It’s 5-1.

65th min: SUBS Brazil. Antony (for Raphinha) and Renan Lodi (for left-back Alex Telles) are now in the game.

62nd min: SUBS Tunisia. Wahbi Khazri is on (for Ghalylene Chaaleli) and takes the captain’s armband. Also, Taha Yassine Khenissi is in for Youssef Msakni, who tried to draw a penalty in the box moments before coming off. There was nothing there.

59th min: Tunisia put the ball in the back of the net but the ball went well over the end line before the cross we delivered. Meanwhile the cameras show Didier Deschamps in the stands.

54th min: Slower start to this second half. Tunisia, down to 10 men, is packing it in and don’t want to concede more goals. The new players brought on for Brazil are still working themselves into the game. Brazil is controlling the game and knocking it around.

46th min: SUBS for both teams to start the second half. Vinicius Jr (wide left for Paqueta) and Pedro will play center forward (for Richarlison). Tunisia bring on Ghandri for Jaziri.

Halftime: This is what you get when you make Brazil angry. First fans were whistling at Brazil’s national anthem, then there were laser pointers, and then the ultimate insult came in the form of bananas tossed on the field after Richarlison’s goal. The videos immediately made their way all over social media.

In the face of this, the Brazilians are scoring, they’re dancing hard, and they’re looking for more goals. You get a sense that they want the crowd to remember this game. For Neymar and Marquinhos, who call the Parc des Princes home, the treatment from the crowd likely stings even more.

It’s not everyday that Brazil puts four goals in a first half. They’re motivated and against a team that didn’t give up a goal in their last seven matches and is now down a man (red card in the 42nd minute), you can probably bet on seeing more goals.

4 – Brazil have scored four first-half goals in a match for the first time since beating Bolivia 5-0 in October 2016. Rampant. pic.twitter.com/GjQU8sBfD5

To think that the Brazilian side took a stand against racism in the pregame. They took the field with jackets that didn’t have Brazil’s five stars for their five World Cup titles. The banner they held on the field was: “Without our Black players, would wouldn’t have stars on our shirt”.

42nd min.: Red card to Bronn! The defender kicks out at Neymar with the ball long gone and he gets the straight red card from the referee. Tensions are high in this match.

40th min.: Goal Brazil! It’s Raphinha with his second of the match. The ball goes from the left side to the right and he blasts a first-time shot that takes a deflection and beats the Tunisian ‘keeper.

Reminder: This is a Tunisian team that didn’t give up a single goal in seven matches.

29th min.: Goal Brazil! Neymar slots home a penalty with laser pointers in his face on his home field. The referee pointed to the spot after Aissa Laidouni pulls down Casemiro on a corner kick in the Tunisia box. Casemiro embellished, but the call stood.

25th min.: Stoppage. There are laser pointers being used by fans in the stands and the referee walks over to the fourth official’s table. He asks for an announcement which happens within seconds. The pro-Tunisia crowd receives the message with whistles.

22nd min.: Yellow card shown to Neymar. Neymar nicks defender Dylan Bronn and gets a yellow for it, but Bronn stays on the ground and milks this. He felt the Brazil captain should’ve been sent off. Neymar can’t believe he even got a card for that.

19th min.: Goal Brazil! And just like that Brazil are back in front. It was Richarlison, who was beat on the Tunisia goal. He beat the Tunisia offside trap, takes it off his chest and drills it into the ground and past the ‘keeper.

11th min.: Goal Brazil! Raphinha drifts into the center and Casemiro launches a pinpoint ball which Raphinha heads over the ‘keeper and under the crossbar. That wasn’t an easy finish.

It’s the first goal given up by Tunisia under their new coach.

7th min.: Lucas Paqueta with a chance. He’s all alone on the left side of the box but can’t get his shot on target. Missed opportunity.

3rd min.: That was unexpected. Neymar getting whistled on his home field of the Parc des Princes. There’s a large Tunisian crowd on hand and they’re clearly the most vocal side in Paris. They’re even doing the “ole” chant as their team passes it around. Tunisia are the home team.

1st min.: We’re off and it’s immediately notable that Danilo is playing in midfield, appearing to be partnering with Casemiro, with Brazil going with three center-backs. We’ll see if it stays that way.

2 mins from kickoff: Anthems are out of the way, handshakes are taking place and we’re moments away.

60 mins from kickoff: Neymar’s chase of the Brazil scoring record will be another storyline on the night.

Neymar is calling in help to break Pele’s record 😅 pic.twitter.com/cEPsZ5lcMm

Eder Militao and Vinicius Jr get a rest on the night, with Danilo and Fred replacing them in the starting lineup and requiring some shuffling of positions, namely Lucas Paqueta shifting wide and Fred playing in central midfield. Alex Sandro and Bruno Guimaraes are unavailable due to injury.

Under manager Jalel Kadri, who took over in January, Tunisia have proven a tough team to break down, emphasizing defensive structure. They’ve earned shutouts in all seven of his matches at the helm and will have their work cut out for them against the prolific Brazilians.

UK & Australia: The match will not be televised in the UK and Australia

USA: The match will be televised by beIN Sports Xtra, which is streamed on fuboTV.

Canada: Similar to the USA, the match will be televised on beIN Sports Xtra, which is also streamed on fuboTV Canada.

Juan Francisco Estrada vs. Roman Gonzalez 3: Official scores to settle between friendly rivals
TV Ratings for Saturday 26th November 2022 – Network Prelims Posted
This Exfoliating & Hydrating Lotion Is a Game-Changer for Smooth Skin
12 Jovani Dresses That Prove Why the Brand Is Viral on TikTok
A new short film from Alice Rohrwacher is getting a release through Disney+