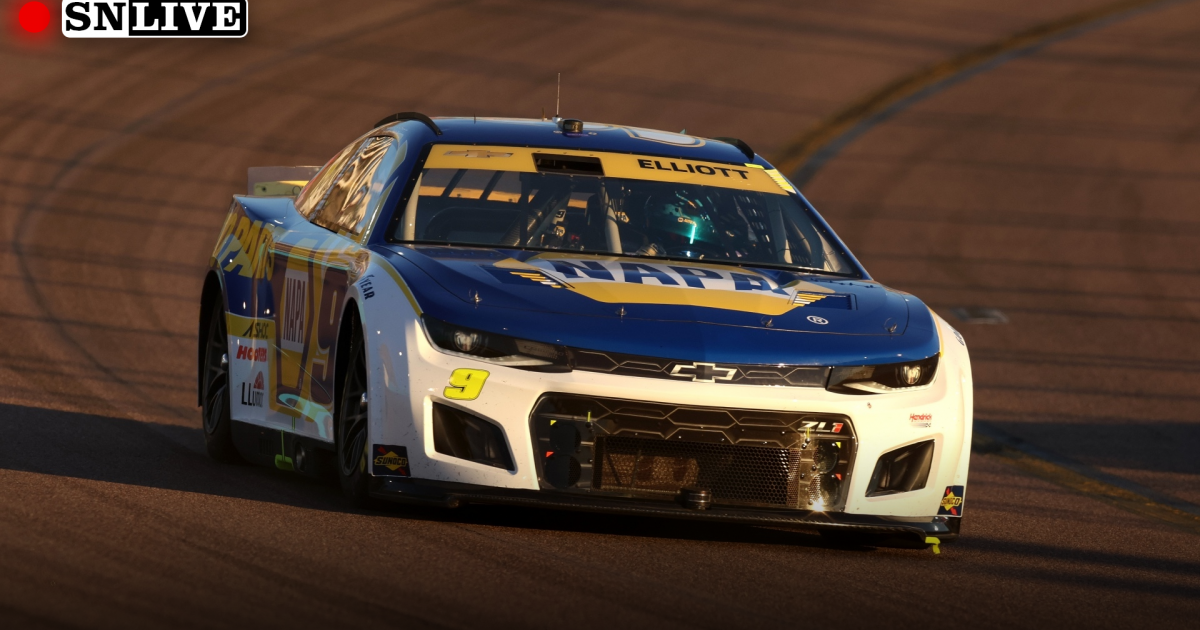 A new champion will be crowned under the Phoenix sun this weekend.

The 2022 NASCAR Cup Series season has been one of the most unpredictable in recent memory. A record 19 different racers have gone to victory lane this year.

The drama has been ever-present, and it reached a fever pitch last week when Christopher Bell and Ross Chastain punched their tickets in the Championship 4 with clutch showings at Martinsville.

Bell and Chastain are championship newbies. Neither one had finished a season in the top 10 before 2022. Chase Elliott and Joey Logano are past champions who can cement their place in NASCAR history with another crown. Logano will start on the pole thanks to his qualifying run Saturday.

One those four drivers will hoist the Cup Series trophy under a monsoon of confetti. Who will it be?

The Sporting News is tracking live updates and result from Sunday’s championship race. Follow all the action as it happens at Phoenix Raceway.

Chastain is in a distant fourth, 1.7 seconds away from Logano.

6:21 p.m.: Brad Keselowski’s car begins to emit flames beneath the right rear wheel, leading the driver to exit. Emergency cars come out on the track to extinguish the flames.

Briscoe leads the way with 36 laps left. He’s looking for a sweep at Phoenix Raceway.

6:16 p.m.: Bell, Chastain and Logano headed to pit road. Logano and Chastain got out in third and eighth place, respectively. Bell out in 16th place. Not ideal by any means.

6:12 p.m.: CAUTION! It’s Alex Bowman. He took some serious damage on a wreck caused by Michael McDowell. Only just recently returned from a concussion, so that’s certainly a concern.

The 6th caution of the day comes out after Michael McDowell gets into Alex Bowman.

6:07 p.m.: Blaney two seconds in front of Briscoe for first place. Logano holding the slimmest of edge’s above fifth-place Bell.

6:06 p.m.: Bell is right there! He’s less than .2 seconds within Logano for fourth place. Putting some real throttle in to this!

6:05 p.m.: Bell is within .4 seconds of Logano’s lead. 58 laps left, both drivers with new tires and fuels. This is getting interesting!

6:04 p.m.: Chastain has some trouble with his pit stop! He’s going to drop some spots after having a slow stop on the right rear tire.

5:59 p.m.: Chastain having some trouble, per Bob Pockrass.

5:55 p.m.: Logano standing firm atop the Championship 4 drivers. Chastain and Bell sit in sixth and seventh place. Chastain about to lap the No. 9 car. Will have to see if Elliott tries to wreck into Chastain and ruin his championship hopes.

5:41 p.m.: Chastain up to fifth place. He’ll have to shake off the wreck with Elliott to nab himself a Cup Series title.

5:39 p.m.: Elliott still back out on the track. We’ll have to see if he can meet minimum speed. He’s in 30th position at the moment.

5:34 p.m.: Chase Elliott spins out on the race restart and crashes! It looks like his hopes of a second Cup Series title are dashed.

It was Chastain who got into him, prompting the wreck. That will certainly ruffle some feathers.

Ross Chastain got into him! #Championship4

Another look at the contact between Chase Elliott and Ross Chastain.

What do you think, fans?

5:19 p.m.: Blaney takes Stage 2! He had a little brake problem at the end of the stage, but he’ll hope to remedy that when he gets to pit road.

Where we stand at the end of Stage 2. pic.twitter.com/NqGIVr5LNY

Logano out in front over the other Championship 4 drivers.

One stage left in the Cup Series season.

5:17 p.m.: Lots of pressure on Chastain, who is running dangerously low on fuel.

5:16 p.m.: Logano’s spotter relaying information the driver telling him to let Martin Truex Jr. pass him for second. The only goal is maintaining fuel.

5:15 p.m.: Chastain has completely opted against shifting to conserve fuel. He sits in 10th, but likely won’t make too much ground up in the final few laps of the stage unless a caution waves.

5:13 p.m.: 10 laps remaining in Stage 2. Each of the race’s Top 12 drivers are hoping to make their fuel last long enough to make it to the end of the stage.

5:07 p.m.: Tense moments between Logano and his team. He requested his team tell him how much fuel he’s short of, as the team has repeatedly recommended that he avoid shifting to save fuel.

21 laps to go in Stage 2. Blaney holds a lead over Logano.

5:05 p.m.: Chastain headed to pit road! With Elliott running on fresh tires (and fuel), looks like the No. 1 doesn’t want to take any risks of dropping position — even as Elliott’s No. 9 car is a lap down on leader Ryan Blaney.

5:03 p.m.: Elliott headed to pit road! Looks like his team is banking on no caution flags being waved for the remainder of the stage. Risky strategy, but only one caution so far, so you can see the logic.

4:57 p.m.: Seems Bell’s car isn’t moving too well at the moment. He’s trying to get past Jones, but having some difficult as we approach the final third of the stage.

4:55 p.m.: Blaney keeping things tight at the front. Remember, if Blaney wins and Logano finishes in front of the other Championship 4 drivers, he’ll still win the title.

Blaney hasn’t nabbed a win yet this year. You gotta think he’s yearning to take a checkered flag in the desert before heading away for the offseason.

4:53 p.m.: Looks like Chastain is still holding off on shifting. He’s telling his team that he’s having some difficulties handling with strictly rear control.

4:48 p.m.: Chastain asking his team the same questions. Looks like he’ll have to do without shifting for the next five or so laps to conserve fuel for the rest of the stage.

4:47 p.m.: Logano asking his team how he can save fuel. He’s got a pretty healthy lead and only has Team Penske teammate Ryan Blaney in his rear view mirror at the moment. Looks like Logano’s crew isn’t too concerned.

4:37 p.m.: Chastain putting on a show early. He’s gained 19 spots since the start of the race, only trailing championship driver Logano.

4:35 p.m.: WHAT A SAVE! Bell got super loose when pitted next to Chastain and Elliott, eventually barreling towards the wall. However, he was able to lift just enough to avoid contact with the wall, keeping his championship dreams intact.

Bell told after save: “One at a time. We’re all right.”

4:34 p.m.: Logano retakes the lead during the race restart. Chastain, Elliott and and Bell three wide as they go across the apron. This is getting tight.

4:29 p.m.: All four championship cars headed to pit road. Logano gives away the lead to get a pit change. Erik Jones, who only got two tires replaced, moves 13 spots to first place under yellow.

4:27 p.m.: CAUTION! Landon Cassill gets loose on Turn 3, swerving into a hard slam in the wall. Ricky Stenhouse Jr. couldn’t do much to avoid him, colliding into the sliding No. 77 car before suffering extensive damage.

4:25 p.m.: Blaney gains a spot on Bell, moving into sixth place. Looks like he’s starting to find his feet after losing some spots on pit road.

4:24 p.m.: Elliott going backwards 20 laps into Stage 2. His car isn’t running quite as smoothly as his team would hope. Within a half a second in front of Chastain, who has some serious pace in his whip at the moment.

4:21 p.m.: Chase Briscoe showcasing the sort of potential that will make him a championship contender next season. He’s up to fifth and threatening to move even higher.

4:20 p.m.: Bell making some serious ground. He’s up to sixth, .2 seconds in front of seventh-place Elliott. Chastain not too far behind in ninth.

4:11 p.m.: And it’s Logano who takes Stage 1! Obviously no stage points awarded for the championship race, but Logano and his team will be delighted to have led each of the first 60 laps on Sunday.

Up front at the end of Stage 1. pic.twitter.com/SQ7Gy4A8jV

4:04 p.m.: Bell really starting to find his groove. He’s racing down Austin Cindric in tenth place, seven spots in front of his starting position. Lots of open air in front of him, but his car is looking quite speedy as we approach the end of Stage 1.

4:02 p.m.: Blaney within half a second of Logano’s lead. Despite taking that damage earlier in the race, looks like he’s moving pretty well now.

4:01 p.m.: Chastain begging his team for some information. Looks like his spotter is starting to feed some suggestions his way. Slowly but surely making his way up the field.

3:53 p.m.: Ryan Blaney suffered a little damage trying to make his way up the track. Looks like he’s got a a few marks on the side of his car. However, he’s still holding firm in second place.

Logano with a two second edge over Blaney. Halfway through Stage 1.

3:46 p.m.: First 14 laps have been fairly solid for Ross Chastain, who had a lot to do to get himself up from 25th position. He’s currently looking to make his way past Kyle Busch and fellow championship driver Christopher Bell in 15th and 16th place. Proving difficult so far but he’s got plenty of speed, something that should shine through as Stage 1 rolls on.

3:25 p.m.: Moment of silence held for Coy Gibbs before the championship race.

3:08 p.m.: Coy Gibbs’ nephew, Jackson, will serve as the tire changer for Christopher Bell’s No. 20 car today, per Bob Pockrass.

It is with great sorrow that Joe Gibbs Racing confirms that Coy Gibbs (co-owner) went to be with the Lord in his sleep last night. The family appreciates all the thoughts and prayers and asks for privacy at this time.

2:31 p.m.: Looks like co-commentator Steve Letarte also won’t be featuring in Sunday’s broadcast. We’ll have to see in NBC brings another personality in the booth to replace him or if the network lets it ride with Rick Allen, Jeff Burton and Dale Earnhardt Jr.

Very little in the world would keep me from broadcasting the Championship race from Phoenix. Well…. Apparently an emergency appendectomy has done the trick. Thank you to Saint Joseph’s hospital and everyone who helped me out. pic.twitter.com/ftkdD31xZ4

2:20 p.m.: Lots of news coming from the 23XI Racing camp ahead of today’s championship race. It seems Ty Gibbs, the Xfinity Series winner, will not take part in Sunday’s race due to a family emergency.

Daniel Hemric will fill his seat in the No. 23 car.