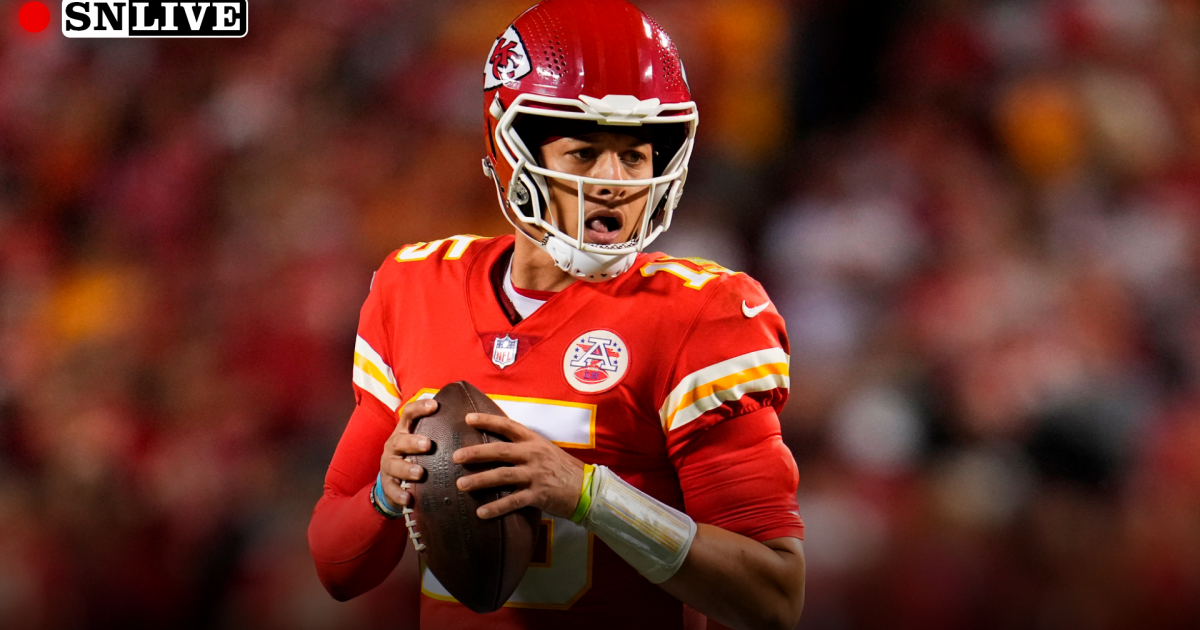 The Titans and Chiefs were the top two teams in the AFC standings last season, and they come into their Week 9 matchup this year as division leaders with hopes of a deep playoff run.

Despite identical 5-2 records, the Chiefs are heavily favored in this game. QB Ryan Tannehill (ankle) was considered a game-time decision for the Titans, who ruled him inactive just before the game and will start rookie Malik Willis for the second consecutive week.

With Willis under center, expect Tennessee’s offense to be strictly run-based again. That worked against the Texans with Derrick Henry overpowering Houston’s defense, but will it be enough to keep up with Patrick Mahomes?

The Chiefs scored 44 points in their last game, a win over the 49ers, and Mahomes has never lost coming out of a bye week. It’s will take a gigantic effort by the Titans’ defense to slow Kansas City’s offense, but it’s easy to forget Tennessee game-planned well for the Chiefs last season and came out with a 27-3 win.

The Sporting News is tracking live scoring updates and highlights as Kansas City hosts Tennessee on “Sunday Night Football.” Catch up on all the moments from the Week 9 matchup.

9:48 p.m. — The Titans take a knee and walk into halftime with a 14-9 lead. Tennessee’s has only gotten better as the game has gone on.

9:46 p.m. — Denico Autry picks up his second sack of the half! With only 19 seconds left, the Chiefs are forced to punt.

9:42 p.m. — Mahomes uses his legs to bring the Chiefs just across midfield. With 33 seconds left, Harrison Butker is hoping to get a chance here.

9:40 p.m. — The Chiefs have given themselves some breathing room with catches by Smith-Schuster, Kelce, and Hardman, but they’re still at their own 25-yard line with under a minute to go.

9:35 p.m. TWO-MINUTE WARNING — What a punt by Ryan Stonehouse! Between a great kick and a penalty, Kansas City will start from its 1-yard line.

9:32 p.m. — Willis sees a nice run erased by a block in the back, and the Titans are punting after an impressive throw to Chris Conley falls incomplete. The Chiefs will have about two minutes to score before the half.

9:26 p.m. — Tennessee’s defense comes out firing and forces a punt after a sack by Denico Autry. The Titans will have a chance to add onto their lead and get the ball out of halftime.

9:21 p.m. TOUCHDOWN — You’re not stopping Derrick Henry tonight. King Henry takes it into the end zone, though his celebration is again (temporarily) paused by confusion over a potential penalty. Titans have their first lead.

Henry from the 1-yard line. Automatic.

9:19 p.m. — Great throw by Willis to Austin Hooper to set up 1st & Goal. The rookie is showing he’s more than just his legs.

9:18 p.m. — We are witnessing vintage Derrick Henry tonight. The former 2,000-yard rusher takes it 56 yards to move the Titans well into Chiefs territory.

9:15 p.m. — The Titans bring pressure on 3rd & 20 and force a punt. Tennessee’s defense looks confident despite some early Mahomes magic.

9:06 p.m. TOUCHDOWN — Derrick Henry takes a direct snap into the end zone! After some confusion about a potential penalty, Henry’s eighth touchdown of the season is confirmed.

.@KingHenry_2 takes the direct snap directly into the end zone. 👀

9:03 p.m. — Now Derrick Henry’s getting in on the action! Titans are in the red zone after a great run.

9:02 p.m. — There’s the athleticism we’ve been waiting to see from Willis. The rookie breathes life into the Titans’ offense and runs the ball into Chiefs territory.

8:57 p.m. TOUCHDOWN — 5 more yards? No problem. Mecole Hardman takes it into the end zone on a catch-and-run to put the Chiefs up by two possessions. Butker inexplicably misses the extra point attempt to keep it at 9-0.

8:52 p.m. — The Chiefs have 3rd & Inches less than three yards from the goal line and let the clock expire. Kansas City will be looking to make this a 10-point game at the start of the second quarter.

8:47 p.m. — Justin Watson makes a terrific catch for 33 yards. Great throw by Mahomes. The Chiefs are on the brink of the red zone again.

8:42 p.m. — The drive fizzles out quickly for Tennessee. Even after Willis’ athleticism helps him avoid a sack, the Titans will punt.

8:40 p.m. — Chigoziem Okonkwo takes off for 48 yards! The rookie tight end had 52 career yards entering tonight. Titans are in business.

Not bad for a screen pass 🔥 @ChigTweets

8:29 p.m. — Mahomes takes off! He runs for a first down and much more, putting Kansas City on the brink of the red zone.

8:27 p.m. — The Chiefs were well into Titans territory, but a facemask penalty on Trey Smith backs them up to near midfield.

8:25 p.m. — Travis Kelce gets into it with David Long after a catch near the first down marker…some early tension.

8:23 p.m. — The Titans kick off, Isiah Pacheco returns the ball to about the 25-yard line, and we are underway!

8:10 p.m. — Temperatures are hovering around 55 degrees in Kansas City, with clear skies and light winds.

7:57 p.m. — Patrick Mahomes’ otherworldly numbers in September get the most attention, but he’s also been unstoppable in November. Can he keep that trend alive tonight?

Chiefs’ QB Patrick Mahomes has won 22 straight games in November and December, the longest win streak by any QB since 1950. The last time Mahomes has lost in either of those months was 2019 — to the Titans team he faces today.

7:37 p.m. — All eyes will be on Willis early in this game, but how much will the Titans let him throw? Tennessee’s offense ran through Derrick Henry in Houston last week.

Titans vs. Chiefs will kick off at 8:20 p.m. ET. The game will be played at Arrowhead Stadium in Kansas City, Mo.