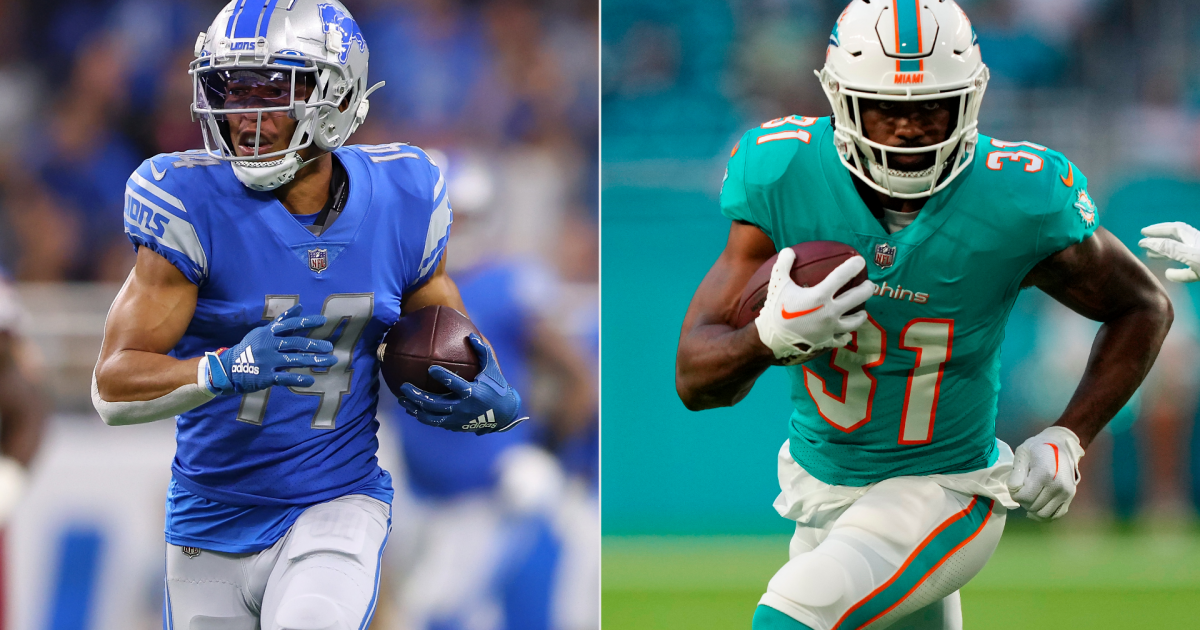 At this point in the season, you’re either a legit contender for the fantasy football playoffs or you’re just playing out the string with a banged-up, disappointing roster. Either way, it’s the perfect time to make a trade. Contenders need to plan ahead for every matchup, especially in the postseason, while pretenders can recapture that excitement they felt on draft day, if only for a brief moment. Executing a good trade starts with finding the right buy-low, sell-high targets, and FantasyPros is here to help with tips and trade advice in their Week 10 Stock Watch that includes Amon-Ra St. Brown, Dalton Schultz, Mecole Hardman, Curtis Samuel, David Montgomery, and Raheem Mostert, among others.

To be clear, we’re not advising last-place teams to make desperation trades and help out contending teams. No one likes that. If you’re 0-9, then you should probably stay out of things. But if you’re 3-6 and still have an outside shot at the playoffs, it can be fun to negotiate a trade and see which side wins. Even if your team ultimately falls short of making the postseason, you’ll stay engaged by tracking the results of your deal. Sure, it could lead to even more heartache, but failing miserably is a big part of fantasy football. It’s why it feels so good when you finally have success.

For contenders, the value of trading with a sub-.500 team is obvious. You can improve your squad without potentially helping one of your chief competitors. This doesn’t mean you should only send low-ball offers because you assume the other side is desperate, but you can usually find good value in these types of trades if you work hard enough. Just remember that trade values change rapidly in the fantasy football world, so don’t get too infatuated with a specific target. Adapt to the trends, and don’t be shy about closing if you have a good offer on the table. — Matt Lutovsky

Amon-Ra St. Brown, WR, Lions. St. Brown dominated the targets (35-percent target rate) in the Lions’ offense while running a route on 100 percent of drop-backs last week, but he finished just four catches and 55 yards on nine targets. He also posted a ridiculous 84-percent air yards share as the only target Jared Goff was considering downfield. If a fantasy owner is souring after a “meh” performance, you need to be aggressive in targeting ASB.

David Montgomery, RB, Bears. With Justin Fields doing it all in Week 9, not much was left over for the RBs. Montgomery posted just 36 yards on 14 carries and Khalil Herbert had 23 yards on seven carries. Monty also earned two targets for a 70-percent opportunity share. Monty has dominated the snaps for two straight weeks, so the coaching staff doesn’t seem to be embracing the shift to drinking the Herbert juice. Therefore, Montgomery is a decent buy-low candidate with the Lions, Falcons, and Packers presenting three of Chicago’s next four opponents. Herbert leads the Bears in rushing yards over the past four weeks (258 vs. Montgomery’s 218) despite 17 fewer carries, so he’s a good buy-low candidate, too.

Dalton Schultz, TE, Cowboys. CeeDee Lamb posted five catches for 77 yards and a TD on seven targets in Week 8, but Schultz also saw seven targets and posted 74 yards on six catches (27-percent target share). He’s back on the TE1 radar with Dak Prescott under center. He hasn’t had fewer than 49 receiving yards and five catches in his three starts with Prescott this season. Buy coming off the bye week.

Raheem Mostert, RB, Dolphins. Mostert (9) and Jeff Wilson Jr. (9) split carries, drives, and snaps in Week 9, but Mostert scored on the ground. Wilson hit higher rushing yardage total (51 vs. 26) and was more involved as a receiver with three targets and more routes run. He also scored through the air. It’s looking like a complete 50/50 split with a slight lean toward Wilson considering it was his first game with the Dolphins and he earned a 52-percent opportunity share on more snaps played. However, because Mostert still scored, I think he still has enough value to be traded before Week 10. That’s the move to make.

Curtis Samuel, WR, Commanders. Terry McLaurin led the Commanders with nine targets in Week 9 but finished with just five catches for 56 yards on a 35-percent target share. Samuel’s volume remained low (four targets), but he scored and led the team with 65 receiving yards. Samuel has just a 15-percent target share in the past two games (four per game) and six total receptions for 115 yards (19.1 yards per catch). Given his current dependence on big plays, the potential return of Jahan Dotson (hamstring), and a brutal matchup versus the Eagles in Week 10, I’d be selling off Samuel to the highest bidder.

Mecole Hardman, WR, Chiefs. Hardman has been running hot with TDs in his past two games, but his scoring won’t maintain with his role in the offense. He ran a route in just 58 percent of Patrick Mahomes‘ drop-backs and saw just a 13-percent target share in Week 9.