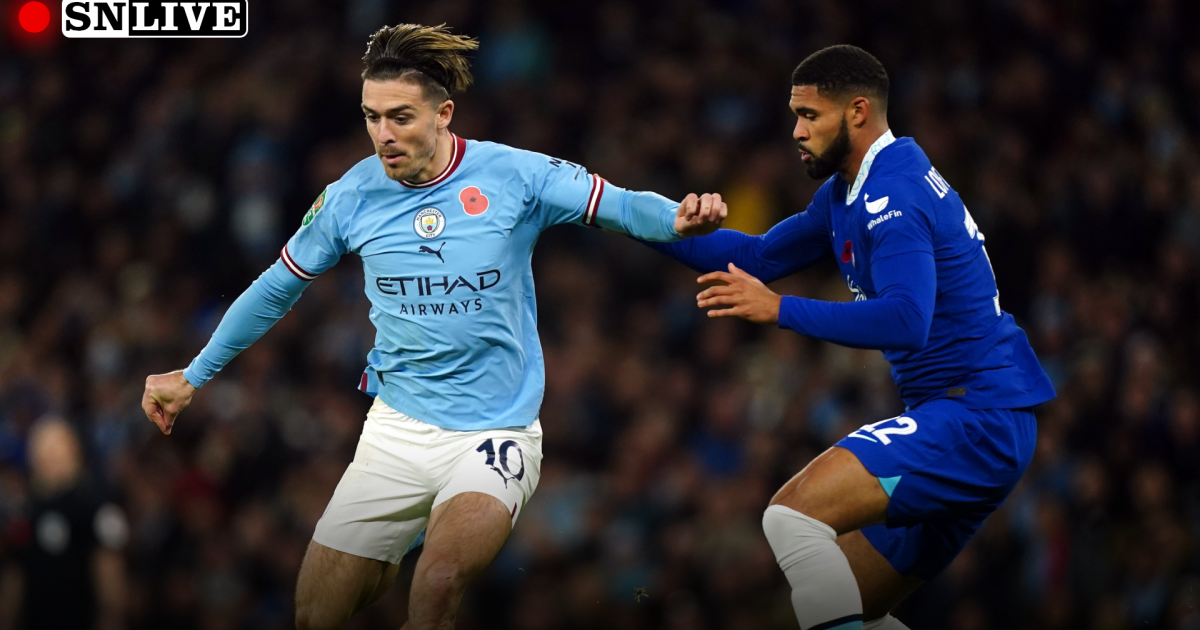 ETIHAD STADIUM, MANCHESTER — Manchester City and Chelsea played out an entertaining goalless first half in their Carabao Cup third-round clash.

A City side showing seven changes from the 2-1 weekend win over Fulham were on the front foot for long periods during the opening 45 minutes, with Jack Grealish thriving as Kevin De Bruyne and Phil Foden rested up alongside Erling Haaland on the bench.

The Sporting News is following the match live and providing live score updates and commentary.

Halftime: Loftus-Cheek slides in to foul Grealish. City have a dangerous free-kick on the left. As they have from seven corners, Chelsea take care of business and the whistle goes. That was fun, see you back here in 10 minutes or so.

45th minute: Chelsea ending the half strongly. Kovacic saunters through an expanse of space in the City midfield. Grealish gets back to interrupt before the ball can find Pulisic.

44th minute: Almost a wonderful moment for Hall, who chops inside Lewis coolly and looks like he must score. But it’s Ortega’s turn to save well as he makes himself but to deny the youngster.

41st minute: Koulibaly’s yellow card means he has to stand off Grealish a little bit and the City attacker fires a shot across goal that Mendy saves brilliantly. Then he pouches Mahrez’s cross from after the subsequent set piece.

35th minute: Hello! Hall sends a ball in behind the City defence with an awful lot of swazz on it. Laporte does well to get there before Ziyech.

31st minute: The hosts are getting closer. Grealish finds Rodri, who resists the urge to shoot and slots a pass down the right to Lewis. The full-back’s low cross passes through a giant Erling Haaland shaped hole about four yards out. Sterling gets a nice ripple of applause on his first warm-up of the night.

29th minute: Almost 1-0 to City. Gundogan, who has been delightful so far, slots a pass to a spinning Alvarez. His shot skimmed wide, with Koulibaly getting a vital touch.

25th minute: Alvarez finds Grealish, who is very much enjoying having the shiny new toy of an overlapping, attacking left-footed full-back outside him. Gomez pings in another low cross and Palmer is unable to make a clean enough contact under pressure.

23rd minute: Pulisic goes it alone, galloping in from the left and has Ortega at full stretch to tip his shot behind. The winger lost his footing when striking that, meaning a painful collision from Aymeric Laporte’s point of view. With an eye on the World Cup, the Spain centre-back seems to be fine.

21st minute: Zakaria gets himself in the way of a Gundogan shot and Mendy mops up. Chelsea surge up the other end and Ziyech’s speculative shot is deflected behind. City see the corner off.

19th minute: Nice effort from Gundogan, that nicks the wall and the roof of the netting. That’ll be another corner that City don’t do anything in particular from.

17th minute: Grealish again, who links with Mahrez and Palmer before getting unceremoniously clattered by Koulibaly on the edge of the box. The Chelsea centre-back very much earned his booking!

16th minute: This is pleasingly end-to-end. Grealish and Gundogan get City moving from inside their own half and the latter sends Alvarez away. The attack ends with Mendy saving a deflected Palmer shot.

13th minute: Ohhh! Almost 1-0 to Chelsea. Loftus-Cheek feeds Ziyech down the right. His low cross finds Pulisic. The USMNT star should bury it but scuffs his shot. The mis-hit almost does for Ortega anyway but the City goalkeeper is able to scramble behind.

12th minute: First proper involvement from Hall, who steps inside Lewis and surges into the City half. Alvarez is persuaded to make the foul.

10th minute: Grealish is all over this game early on. Chelsea partly clear City’s latest corner and the England international thumps a sweetly struck shot just past Mendy’s near post. Guardiola is out in his technical area offering enthusiastic applause.

9th minute: A deft flick from Alvarez sends Grealish scampering away on the break. He catches up for the return pass and ther shot is blocked behind.

8th minute: Broja picks Gundogan’s pocked inside the City half, barrels past Laporte’s attempted challenge and then thwacks a shot over from 25 yards. Typically muscular stuff all-round from the Chelsea forward!

7th minute: If you had Chelsea and singing “Champions of Europe, you’ll never sing that!” on your bingo card, check that one off already.

6th minute: Nice interplay with Palmer, Mahrez and Grealish all involved. The latter works the ball left to Gomez and Koulibaly does well to clear the full-back’s low cross behind and not into his own net. Chelsea deal with the corner.

4th minute: Grealish gets room to stretch his legs through midfield and gets into the box. His shot is blocked, Gomez’s volleyed cross goes over every one but City win a corner. Good start from the hosts.

2nd minute: If you had a rabidly pressing Alvarez closing down a dozy Mendy clearance on your bingo card, check that one off already. The Chelsea goalkeeper gets away with a goal kick but expect the Argentina forward to test him any time he gets the opportunity in that fashion.

1st minute: We’re off, City straight into their work attacking the South Stand. Grealish thought he’s won a corner but he was offside.

5 mins from kickoff: All sorts going off in the way of pre-match hoo-har here. We’ve had a load of dry ice and smoke, a lights show and now a tenor giving us an operatic take on Blue Moon as a giant blue moon floats above the centre circle. Never let it be said that Manchester City don’t take their Carabao seriously.

20 mins from kickoff: It’ll be interesting to see how this game pans out with two experimental starting XIs. Potter might look for Chelsea’s wide attackers and wing-backs to target City’s young full-backs, especially given that providing defensive cover doesn’t tend to feature too high up on the list of things to recommend about Mahrez or Grealish.

40 mins from kickoff: Jack Grealish is one of four players retained from the weekend starting line-up by Pep Guardiola. The video below featuring the England international, well, it’s just really, really lovely.

55 mins from kickoff: It’s a similarly interesting Chelsea XI. Looks like Potter has gone with a back three, while 18-year-old Lewis Hall gets a second senior start. Sterling has to be content with a place on the bench.

1 hour from kickoff: The teams are in. Teenage full-back Rico Lewis starts for City, having scored his maiden senior goal in last week’s 3-1 Champions League win over Sevilla. Erling Haaland, Phil Foden, Silva and De Bruyne are all on the bench alongside Kalvin Phillips, who will be hoping for his first outing since shoulder surgery.

1 hr 20 mins from kickoff: Pep Guardiola’s plans for this evening might have been thrown into flux by what unfolded at the Etihad Stadium at the weekend. City beat an in-form Fulham 2-1 despite Joao Cancelo being sent off inside Tthe first half-hour. The likes of Bernardo Silva and Kevin De Bruyne produced truly tireless shifts and might put their feet up before Saturday’s final Premier League game before the World Cup against Brentford. We’ll find out in about 20 minutes.

“The game here against Fulham on Saturday was special for me,” Guardiola said in his programme notes for this evening’s game. “To be able to celebrate a game like that with you was special. I saw so many happy faces in the crowd and it’s moments like this that make me realise why I do this job and why being the Manchester City manager is a privilege.”

1 hr 40 mins from kickoff: If you’re able to concentrate on this game despite World Cup squads dropping every five minutes then you might be in for a treat. City have been in formidable form at home this season and the game could be coming at an inconvenient time for Chelsea and their boss Graham Potter. It’s four games domestically without a win domestically for the Stamford Bridge outfit. On the other hand, maybe form won’t count for too much, with both managers expected to shuffle their decks a little. And, as the 2021 Champions League final showed, Chelsea quite like a cup tie against City…

2 hours from kickoff: Hello and welcome to The Sporting News’ live coverage of the Carabao Cup third-round clash between Manchester City and Chelsea.

Joao Cancelo is suspended after his red card against Fulham, meaning starts for rookie fullbacks Rico Lewis and Sergio Gomez, while Cole Palmer gets the chance to impress in midfield

Erling Haaland came off the bench to net a stoppage-time winner from the penalty spot — his 23rd goal of the season —and the Norway striker remains among the substitutes as he continues to nurse the effects of a foot injury. England midfielder Kalvin Phillips is in line for some valuable pre-World Cup minutes from the bench after returning to training from shoulder surgery.

Graham Potter brings in Armando Broja to lead the line, flanked by Christian Pulisic and Hakim Ziyech. Raheem Sterling has to be content with a place on the bench against his former club, while there is a start for 18 year-old Lewis Hall.

What time is Man City vs Chelsea?

Manchester City play host to Chelsea at the Etihad Stadium in Manchester, England. It kicks off at 8 p.m. GMT on Wednesday, November 9.

How to watch Man City vs Chelsea

UK: The match will be broadcast on Sky Sports and is available to stream via Sky GO or NOW TV.

USA: Fans can stream the match via ESPN+.

Canada: The match is available to watch through fuboTV and DAZN.

Australia: BeIN SPORTS 2 will broadcast the match, which is also available to stream through beIN SPORTS Connect and Kayo Sports.

When is the Carabao Cup fourth-round draw?

The draw for the last 16 will take place on Thursday, November 10 after Manchester United’s tie with Aston Villa.