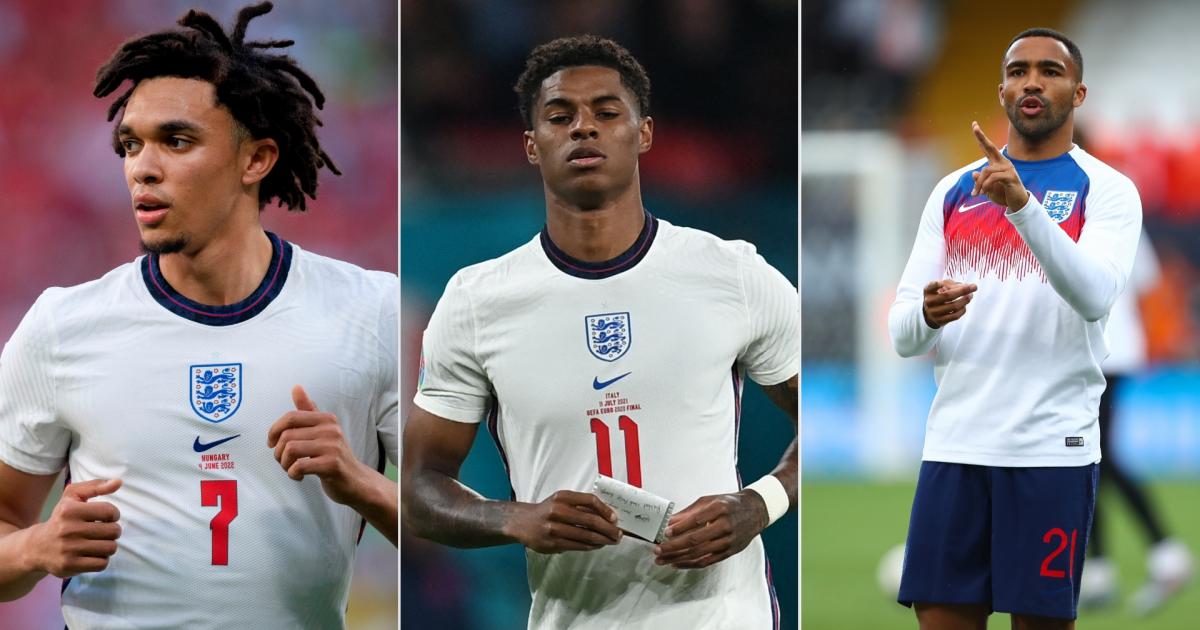 England head coach Gareth Southgate has finally unveiled the 26-man squad he is taking to the 2022 World Cup in Qatar with a string of surprise names included.

The Three Lions boss has kept faith with the bulk of the side which reached the final of Euro 2020 last summer but injuries and current form have twisted his arm in other selections.

Arsenal’s Ben White is rewarded for his strong start to 2022-23 with a call up alongside unexpected picks for James Maddison, Conor Gallagher, Marcus Rashford and Callum Wilson.

The debate over who will start at right back for England has been a key battleground for fans in recent months with Southgate presented with a headache over the role.

Alexander-Arnold’s injury removed him from the equation last summer, with Manchester City star Kyle Walker first choice at Euro 2020, when playing with a back four.

Reece James’ own injury nightmare has robbed England of a key asset but refocused the row on different players.

Walker’s own fitness issues have put his place in the starting XI in doubt with Kieran Trippier a wingback option in a tweaked 3-5-2 system.

Southgate looks certain to revert to a four man defence, with Walker as first choice, if he can prove his match readiness, after two months out with a groin problem.

Alexander-Arnold’s polarised status appears to be never ending within the England fan base despite his incredible attacking output for Liverpool.

Alexander-Arnold on his critics:

“They used to say ‘Trent’s changed the position, changed the role, changed how full backs play’. Now it’s like ‘he doesn’t defend like a full back is supposed to’. If I’ve changed the game, then surely like you can’t have one without the other.” pic.twitter.com/6IRFHvvmR2

The 24-year-old is arguably the best natural candidate for the role, but Southgate’s pragmatism does not align with Jurgen Klopp’s proactive style, and the Liverpudlian could be a threat from the bench.

The former Brighton defender has made 13 starts from 13 league games so far in 2022-23 alongside central defensive pair Gabriel Magalhaes and William Saliba.

Magalhaes and Saliba’s form has seen White remoulded into a right-back this season but his defensive flexibility means he can play across the back line.

He is the in-form defender heading in the competition, ranking second for successful tackles (13) and blocks (7) at Arsenal, and third for clearances (25) and duels won (54).

Most tackles made by English defenders in the Premier League this season:

Been a revelation at right-back. 🙌 pic.twitter.com/ebgO6P23Ck

With a deep pool of options at full back, Southgate will be looking at White as an option in his favoured central position, as Harry Maguire continues to find his feet.

Manchester United boss Erik ten Hag removed his captain from the squad to ‘clear his head’ last month, as his form nosedived, and his confidence vanished.

Southgate has built a reputation of sticking by certain players for England, regardless of form, with that loyalty galvanising certain stars, but this situation looks different.

Maguire’s drop off has underlined concerns over his ability to perform at the highest level and White’s calmness and ability to build from the back gives him an edge.

The conundrum over Maguire will be a test of Southgate’s methods ahead of the big kick off on November 21.

Can Conor Gallagher and James Maddison break into the starting XI?

Leicester City schemer Maddison has dominated the headlines ahead of Southgate’s announcement with his impressive Foxes form creating a clamour for his inclusion.

Southgate has responded to the calls by naming the 25-year-old in his squad despite not featuring for England since his debut in 2019.

Stretching out to the start of 2022, only Harry Kane (33), has more goal contributions as an English player in the Premier League than Maddison (22), and he is joint highest for assists (9) for Three Lions players, alongside Kane and Bukayo Saka.

The key issue for Southgate is finding a way to get the best from Maddison within his England system in Qatar.

Maddison’s best performances have come from the right wing of a 4-1-4-1 system, which translates in 4-2-3-1/4-3-3 for England, and places him in direct competition with Saka.

Saka is unmoveable for Southgate and that puts Maddison in the pressurised situation of ‘changing a game from the bench’, which is far from ideal.

Gallagher’s call up was somewhat unexpected but his squad role looks clearer in the England engine room.

Declan Rice is a set starter for Southgate, with Jude Bellingham’s form edging out the injury prone Kalvin Phillips, in Southgate’s midfield plans.

Gallagher’s main strength is his double lunged pressing ability across central areas, and Southgate will utilise that, if sides are passing through the Bellingham/Rice axis.

Southgate on Gallagher. “You have players that either stop goals, create goals or score goals and Conor can do a bit of all three.” Also praised his response to going back into the Under-21s. #cfc

Is Callum Wilson an alternative for Harry Kane?

Southgate’s options as a Plan B to Kane were set as a tight race between Wilson and Brentford star Ivan Toney with the former getting the nod.

Delighted for Callum Wilson, who makes the England squad. But Ivan Toney can feel very hard done by.

Six Premier League goals from 10 games puts him at a ratio of 0.69 per 90 minutes, fifth in the top-flight, and only bettered by Kane as an England player.

The Newcastle frontman fits the mould as a ‘traditional centre forward’ as the focal point of Eddie Howe’s attack.

2 goals for @CallumWilson in front of the England manager 🧐 #NEWAVL

Kane’s place for England is undisputed under Southgate with the Spurs hotshot completing 90 minutes in 30 of his last 32 competitive performances for the Three Lions.

Wilson will not start for England in Qatar – barring an injury to Kane – but he could dovetail with him, if Southgate reshuffles.

Kane has shown an ability to drop into a No.10 role at Tottenham, to release Son Heung-min, and he could do that for England, flanked by Saka and Raheem Sterling, if Southgate wants to deploy a striker to run in behind defences.

Can Rashford take his chance with England?

The sight of Marcus Rashford back fit and flying has been a welcome one for United fans this season with their homegrown hero netting seven goals across Premier League and Europa League action.

He is also leading the way for Premier League goals (4), shots on target (11) and dribbles completed (17) at Old Trafford.

Ten Hag has rotated him between a central and a left hand side role and the latter looks to be his best chance with England in the coming weeks.

Sterling’s struggles will be another test of Southgate’s commitment to key names with his start to life at Chelsea in contrast to his starring role at Euro 2020.

The pair could be in direct competition for one spot, but Rashford’s refreshed confidence means he will not need any encouragement to make an impact off the bench, with three Europa League goals as a substitute demonstrating that.