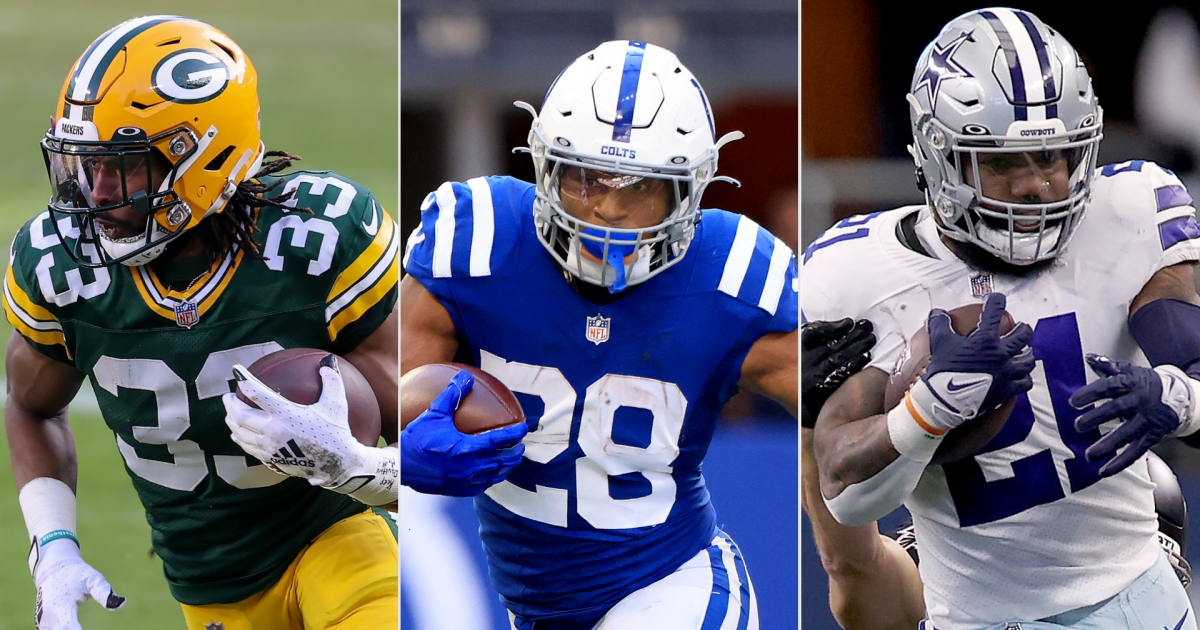 As we look forward to Week 10, fantasy football owners are checking the latest injury reports to see which running backs are in danger of missing time. Aaron Jones, Jonathan Taylor, Ezekiel Elliott, Kyren Williams, and Elijah Mitchell are the most important RBs dealing with issues that could keep them out for Week 10, and depending on their statuses, fantasy owners will have to make tough start ’em, sit ’em decisions at a position that does not have a ton of depth on the waiver wire.

Below, we’ll give you the latest news on these RBs and break down how their injuries could potentially affect the Week 10 fantasy landscape.

Jones (ankle) was a limited participant at Wednesday’s practice, according to Green Bay’s injury report.

It’s good to see Jones back at practice after he was in a walking boot last Sunday. If he doesn’t suffer any setbacks, he should be out there in a tough matchup against a Dallas defense allowing the third-fewest fantasy points per game to RBs this season. Jones is still in play as a solid RB2 thanks to his talent and involvement in the passing game. If Jones is out, AJ Dillon becomes a risky flex.

Taylor (ankle) returned to practice Wednesday after missing last week’s game against the Patriots, according to beat writer Zak Keefer.

The star running back has been dealing with this ankle injury since Week 4. The last time we saw Taylor on the field was in Week 8 against the Commanders when he posted 76 yards on 16 carries. If Taylor can make it through a full week of practice, he’ll be viewed as an RB1 against a Raiders’ defense allowing the seventh-most fantasy points per game to RBs. If he has a surprise setback, some combination of Deon Jackson (knee), Jordan Wilkins, and Zack Moss will split time.

Elliott (knee) returned to practice on Wednesday, but his reps were being monitored, according to ESPN’s Todd Archer.

The Cowboys had a bye last week, which was perfect for Elliott, who did not play in Week 8 after suffering a sprained MCL. It will be interesting to see how many carries the veteran running back gets, as Tony Pollard ran the ball well against the Bears. Pollard had 131 yards and three touchdowns on 14 carries in the 20-point win over Chicago. Elliott and Pollard should find success against the Packers’ defense on Sunday, which allows the 13th-most fantasy points per game to RBs this season. We currently have Pollard ranked slightly higher than Elliott, but both are decent options this week.

Rams head coach Sean McVay told reporters on Wednesday that Williams (ankle) has “a good chance” to play in this week’s game against the Cardinals, according to beat writer Stu Jackson.

Williams has barely seen the field after suffering a high-ankle sprain in the regular-season opener against the Bills. There was a chance the former Notre Dame running back would be activated for last week’s game, but the team promoted Ronnie Rivers to the active roster. With Williams likely getting the call-up, it will be interesting to see how McVay uses him along with Cam Akers and Darrell Henderson Jr. As of right now, it’s tough to recommend starting Williams until we actually see him in action, but given the sorry state of L.A.’s running game, he could be starting soon. Stash him now and watch his reps this week.

The 49ers designated Mitchell (knee) to return from injured reserve earlier this week, meaning they have a 21-day window to activate him. The young running back has missed the past seven games due to a sprained MCL he suffered in Week 1.

After trading Jeff Wilson during the NFL’s trade deadline, the 49ers have a glaring need at the backup RB spot behind Christian McCaffrey. The only other healthy running backs on the roster are rookies Tyrion Davis-Price and Jeff Mason. The Wilson move is a good sign that Mitchell will be back on the field against the Chargers, who have struggled to stop the run this season (145.5 rushing yards per game allowed). He has flex potential given the matchup, but there’s always risk with a backup who hasn’t played in two months.