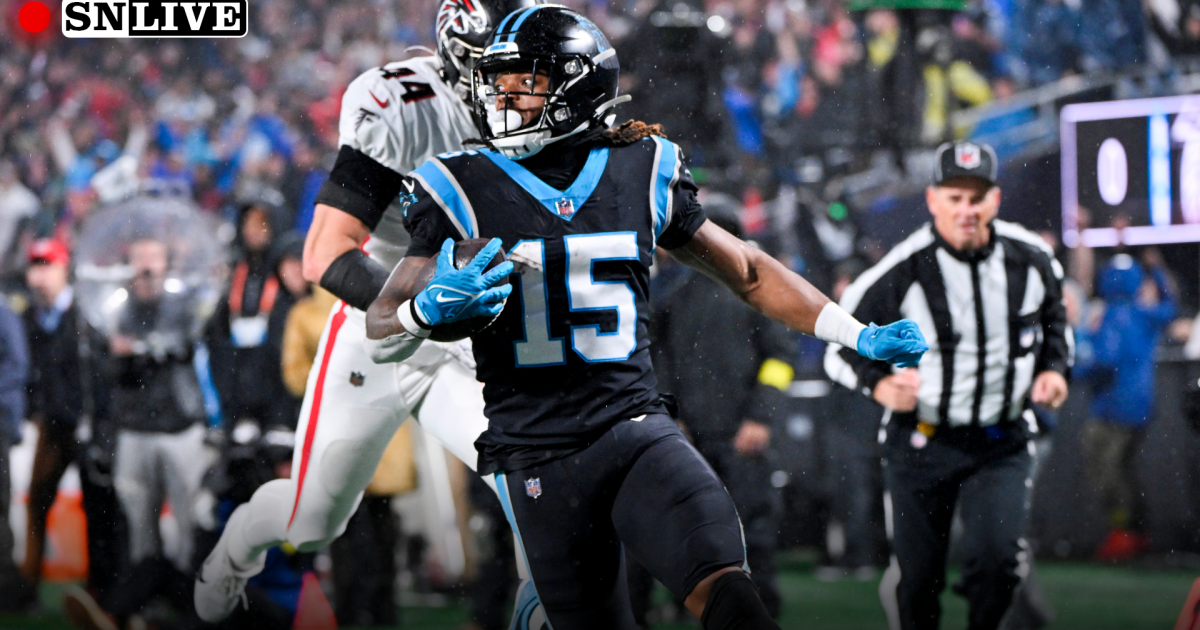 The Falcons and Panthers played one of the most entertaining games of the 2022 season when they last met less than two weeks ago. It might be wishful thinking to expect the same on Thursday night, but the NFC South has been a source of chaos all season.

The Falcons are 4-5, though they trail the Buccaneers (4-5) by only a tiebreaker in the NFC South and even led the division for a week at 4-4 before their loss to the Chargers in Week 9.

Despite entering the year with expectations of contending for the No. 1 pick, Atlanta has made a habit of playing competitive games. None were closer than the Week 8 matchup with the Panthers, who nearly won on a Hail Mary touchdown from PJ Walker to D.J. Moore before a series of miscues swung the game back to the Falcons in overtime.

Walker is starting again for Carolina (2-7), just days after he was benched for Baker Mayfield at halftime of an ugly loss in Cincinnati.

While the unheralded quarterback has made some big throws, including the touchdown to Moore, he was held to just nine yards in the first half against the Bengals. If he can’t show signs of life against a shaky Falcons defense, Walker might run out of chances to keep his starting job.

MORE: Why did the Panthers bench PJ Walker? Carolina turns to Baker Mayfield vs. Bengals after poor performance

Follow along as The Sporting News tracks live scoring updates and highlights as Carolina hosts Atlanta on “Thursday Night Football.”

9:56 p.m. — Offense is going to be even harder to come by in this rain, and a terrific punt by Bradley Pinion won’t help matters for Carolina.

9:55 p.m. — Mariota can’t get rid of the ball and is forced out of bounds for a loss. No field goal attempt – Falcons will punt instead.

9:54 p.m. — It’s getting weird now. With the rain coming down harder, officials set the ball three yards behind where it should’ve been. Arthur Smith is unhappy.

9:52 p.m. — Now it’s Atlanta’s turn for a costly penalty. A holding call negates (but also caused) a nice run by Tyler Allgeier and makes it 2nd & 11 for the Falcons.

9:50 p.m. — The Falcons’ running game is gaining steam. Mariota takes off for 26 yards, and a holding call on Jaycee Horn adds onto it.

9:48 p.m. — The Panthers open with a sluggish first drive derailed by a penalty. Falcons avoid disaster and quickly get the ball.

9:35 p.m. — The Panthers are essentially doing what the Falcons do best and thriving on an effective running game. We thought the absence of A.J. Terrell might make the difference tonight, but it’s Atlanta’s run defense that has to step up.

End of first half: Panthers 13, Falcons 3

9:31 p.m. FIELD GOAL — Younghoe Koo connects on a 33-yard attempt to put the Falcons on the board. Panthers will get the ball out of halftime, setting up a critical defensive moment for Atlanta.

9:30 p.m. — With no timeouts, the Falcons play it very conservatively and set themselves up for a field goal try.

9:27 p.m. — Mariota completes to Drake London, and a late shot by Xavier Woods moves the Falcons up. Atlanta has a shot to score some points before the half.

9:25 p.m. FIELD GOAL  — How about this night from Eddy Pineiro? After his struggles cost the Panthers a win last time out against the Falcons, he just nailed his second field goal from 45+ yard field goal of the night to make it 13-0.

9:19 p.m. TWO-MINUTE WARNING — The Panthers’ running game continues to churn out chunks of yards. Carolina is inside the 30-yard line.

9:16 p.m. INTERCEPTION — Jaycee Horn intercepts Marcus Mariota to bring a quick end to the Falcons’ latest failed drive. The Panthers will start in Atlanta territory and have a great chance to add onto their lead before the half.

Ball up for grabs… and @jayceehorn_10 is under it. PICK! #KeepPounding#ATLvsCAR on Prime Video
Also available on NFL+ https://t.co/xiiiBjvT39 pic.twitter.com/tU4tKtGQFl

9:11 p.m. TOUCHDOWN — This game has some life! Laviska Shenault catches a pass behind the line of scrimmage and takes it down the sideline for what was ruled a 41-yard rushing touchdown. Panthers up 10-0.

9:09 p.m. — This has not been the most entertaining game, and it’s tough to blame the weather. Remember this night when Tom Brady and the 8-9 Buccaneers stroll into the playoffs.

9:07 p.m. — Tyler Allgeier nearly pushes ahead for the first down, but even 4th & Inches is much too risky for the Falcons deep in their own territory. The Panthers will get the ball back with solid field position.

9:04 p.m. — The Falcons start buried in their own territory after Johnny Hekker’s great punt.

9:01 p.m. — A sack by Dee Alford and Arnold Ebiketie buries Walker and the Panthers. A promising drive for Carolina ends in a punt.

8:58 p.m. — A false start pushes the Panthers back to 2nd & 17. They’re going to need some more yards to have a comfortable field goal attempt.

8:53 p.m. — The Panthers are well beyond midfield as they continue to feed Foreman the ball. Foreman is up to 45 yards on nine carries.

8:47 p.m. — Panthers are moving the ball better than expected through a quarter, but still a long way to go on this drive if they want some points.

8:44 p.m. — Foreman bursts ahead for a first down. He played well against Atlanta the first time and looks like the focus of the Panthers’ offense early tonight.

8:36 p.m. — The Falcons have shown a willingness to throw the ball early, a bit of a surprise given the weather and their style of offense.

8:35 p.m. — Damiere Byrd hauls in a pass over the middle for 19 yards. Falcons are past midfield for the first time.

8:34 p.m. — Cordarrelle Patterson was close to breaking free on the kickoff return…but he gets tripped up at the 34-yard line. Still, better field position than last time for Atlanta.

8:31 p.m. FIELD GOAL — Eddy Pineiro, whose struggles were a defining part of the last matchup between these two, barely knocks through a 46-yard field goal. Carolina strikes first.

8:29 p.m. — Walker takes a shot to the end zone and is VERY lucky Darren Hall didn’t intercept it.

8:21 p.m. — Tyler Allgeier gets dumped behind the line of scrimmage to end the Falcons’ drive. Carolina will get the ball for the first time tonight.

8:19 p.m. — A little bit of a shaky start to the Falcons’ drive with another penalty, but a pass to Kyle Pitts coverts a first down. Pitts has been targeted twice early.

8:15 p.m. — We’re underway! The Panthers kick off to Cordarrelle Patterson, whose return to the 27-yard line is knocked back 10 yards by a holding penalty.

8:09 p.m. — How about these Panthers helmets? The NFL’s relaxed helmet rule is the gift that keeps on giving.

8:07 p.m. — P.J. Walker played well against the Falcons in Week 9, but he threw for only nine yards in a half before getting benched last weekend. It’s fair to say he’s playing for his job tonight.

7:46 p.m. — This was the best pregame story: Falcons OT Jake Matthews traveled back to Atlanta for the birth of his son today and returned in time for tonight’s game. He’s active and set to start.

7:40 p.m. — It’s a wet, breezy night in Charlotte, but by all accounts the conditions aren’t as ugly as they could’ve been. North Carolina is feeling the early effects of Tropical Storm Nicole. Keep an eye on the kickers if the wind picks up…

Falcons vs. Panthers will kick off at 8:15 p.m. ET. The game will be played at Bank of America Stadium in Charlotte, N.C.

What channel is Falcons vs. Panthers on?

Like other “Thursday Night Football” broadcasts, Falcons vs. Panthers will be live streamed on Amazon Prime Video. Al Michaels (play-by-play), Kirk Herbstreit (color analyst) and Kaylee Hartung (sideline reporter) will be on the call in Charlotte.

Those watching from Canada can tune in with DAZN, which features every NFL game.