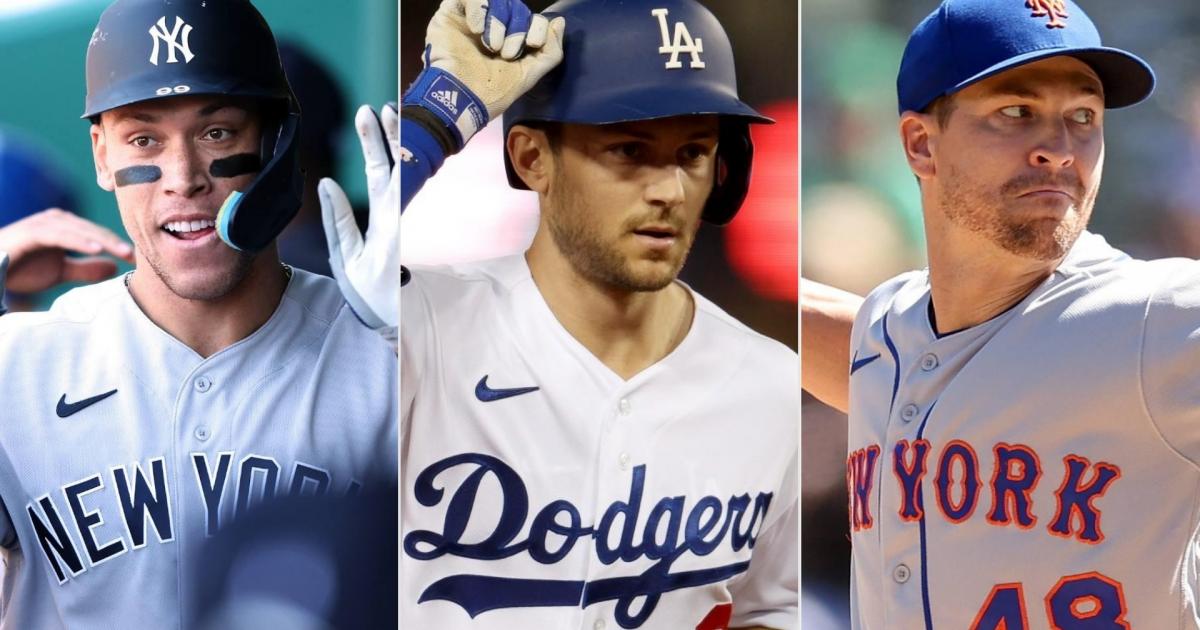 Before we begin, remember how last offseason there were a handful of elite free-agent shortstops on the market, and everyone tried to guess where they’d wind up, and then the Rangers shocked everyone and signed TWO of them, Corey Seager and Marcus Semien? Absolutely nobody predicted that scenario playing out, and even as the rumors that Semien was close to signing with Texas swirled, it felt like we were all being played.

Sometimes, the free-agent truth is strange. No matter how much reporting is done and relied upon, free-agent predictions are mostly speculation. Guesses, really, using bits of information that we know — well, things we think we know — to try to guess how various signings might play out.

FOSTER: The 22 coolest things that happened in the 2022 MLB season

With that in mind, let’s start our informed speculation predictions.

The idea of being a Yankee for his entire career has always appealed to Judge, and he’s been open about that in the past. And he was willing to sign an extension to stick around, but the Yankees consistently refused to offer a deal that Judge’s camp felt was fair-market value. The Yankees wanted, essentially, a hometown discount for the game’s premier slugger. That’s not how it works. They didn’t want him to be a lifelong Yankee at any price, but on their terms. Well, now they’ve completely lost any bargaining power, sowing seeds of frustration along the way. Judge, who is entering his Age 31 season, is going to hear a lot of “we want you at any cost” from other teams and that’s going to be really refreshing.

It’s not just that Judge grew up a short drive east of San Francisco, but the Giants might need what he brings to the table more than any other would-be contender in baseball right now — his power and his star appeal. And, oh yeah, the Giants have a ton of money to spend, with contracts that are already off the books or will be soon. They’ll come after Judge with everything they have, and there will be no hometown discount asks.

The cash earned over a World Series run is always a nice bonus for a franchise, and the smart ones reinvest that into the roster. Turner makes a ton of sense in Philadelphia, where he’d rejoin former teammate Bryce Harper. But that’s just part of it. The biggest thing is that Turner, heading into his Age 29 season, would give them a real quality leadoff hitter, allowing them to end the Kyle Schwarber experiment atop the lineup. Imagine opposing pitchers trying to work through the top of a Philly lineup that starts Turner-Harper-Realmuto-Schwarber.

Turner at short would allow the Phillies to rework their infield defense. They could move Bryson Stott to second (they didn’t exercise Jean Segura’s option), or they could move Stott to third, shift Alex Bohm over to first and figure out what to do with Rhys Hoskins, then find another second-base option. Hoskins is not a good defensive first baseman, and with only one year remaining of club control, it’s possible the Phillies deal him away this offseason.

A caveat: If the Yankees start to get the sense that Judge might actually leave, a pivot to Turner makes a lot of sense.

It’s not just that deGrom and the Mets have a long connection, it’s that the Mets very much need starting pitchers if they’re going to compete for a playoff spot in 2023. And not just a playoff spot, but the World Series. Remember, deGrom, Chris Bassitt and Taijuan Walker all opted out of their deals heading into the offseason, so beyond Max Scherzer the starting pitching cupboard is pretty bare at the moment. The Mets will dole out plenty of money to starting pitchers this offseason, and it seems likely that deGrom gets a healthy portion of that cash.

The Cubs almost certainly aren’t going to be actual contenders in 2023, but they hope to be back in that conversation soon, and bringing Correa — the youngest of the elite shortstops on the free-agent market — would be a huge step in the right direction. So many decisions over the past few years have been based on shedding cash — not just trading Anthony Rizzo, Javier Baez and Kris Bryant, but outright cutting ties with Kyle Schwarber and letting him walk because they didn’t want to pay his expected arbitration salary, remember? — and now it’s time for the front office to spend a little to show fans they’re serious about getting back to the baseball mountaintop.

MORE: The 11 most intriguing MLB trade candidates this offseason

Baseball fans in general are still sleeping on how good Rodon has been the past two seasons: 55 starts, 2.67 ERA, 2.42 FIP, 12.2 K/9, 157 ERA+. Yeah, that’ll play on the free-agent market. He’s the kind of strikeout starting pitcher who’s lacking from the rotations of some contenders — hi, Cardinals! — but there will be no bargains on Rodon this time, like what the Giants got him for last year. Baltimore would have to sell Rodon on its ability to compete the next couple of seasons, but how perfect would he be atop that rotation, in that division? The Orioles have basically no contracts of significance on their books and absolutely could afford to spend big to land an ace such as Rodon.

It’s reasonable to think that Bogaerts will sign after Correa and Turner make their choices, unless he signs quickly with a team that won’t realistically be in the mix for one of those two shortstops. At least one Vegas oddsmaker puts the Cardinals at the top of the list of suitors for Bogaerts, but with the new shift rules placing a premium on up-the-middle range and the Cardinals’ obsession with prioritizing defense at the position — evidenced by the 639 PAs they gave Paul DeJong in 2021-22 as he produced a 73 OPS+ — Bogaerts doesn’t feel like he’d top their list. His glove is better than his range. He’d be a nice fit in Minnesota, the type of consistent offense producer who would help stabilize the lineup and replace Correa at short.

The Dodgers have a lot of questions in the rotation, with Walker Buehler out for the year and Clayton Kershaw (and maybe Tyler Anderson, depending on qualifying offer decisions) a free agent. Verlander would be an outstanding short-term fix.

I don’t think this is the lock some folks see it as. But I’m just not convinced — despite promises to the contrary — that the Braves are willing to spend the type of money it would take to land one of the top-tier free agents, such as Turner or Correa (or Judge or deGrom). The Braves know exactly what they’re getting with Swanson. He’s comfortable. He’s part of the Atlanta community. And he’s really very good, especially with the glove. And it would be kind of surprising if they let clubhouse leaders leave in consecutive offseasons, especially with how everything went down with Freddie Freeman signing with the Dodgers.

Only five outfielders over the past three seasons have a bWAR in double digits: Aaron Judge, Juan Soto, Mookie Betts, Kyle Tucker and, you guessed it, Nimmo. He has a .384 on-base percentage and 133 OPS+ in that stretch, and he’s coming off his finest season. The Mets have made it clear they want him back, which means other teams will want him, too. Injuries have been an issue, but the two seasons he’s played at least 140 games, he’s produced bWAR numbers of 4.6 and 5.1. The Mets have lots of needs this offseason, but they have lots of money, too. A caveat: In a world where Judge signs elsewhere, adding Nimmo to the mix with Harrison Bader would make the outfield defense elite. And while he’s not the power guy Judge was, obviously, he would fill the void at leadoff hitter.

The club reportedly nearly had a deal for Contreras done at the trade deadline, but it fell through. Now, with a bit more time and only money involved, look for that to get locked down. The Astros have enough flexibility that they can get Contreras at-bats at DH, too, which would allow manager Dusty Baker to continue to regularly use veteran catcher Martin Maldonado.

Dodgers bring back Clayton Kershaw: He’ll be back, for as many years as he wants.

Yankees sign Kenley Jansen: Who is the closer in New York next year? Jansen isn’t what he once was, but he would provide needed stability in a bullpen that was a mess down the stretch last year.

Yankees bring back 1B Anthony Rizzo: Whether or not the Yankees can retain Judge, they need Rizzo back in the lineup and the clubhouse.

Red Sox sign SP Chris Bassitt: Boston had 12 pitchers start at least two games last year, and only Nick Pivetta started more than 26. Bassitt has 68 starts over the past three seasons (remember, 2020 was shortened) and a 3.13 ERA in that span. He’d be a stabilizing upgrade, even at 33.

Cardinals sign OF Michael Conforto: There should be no shortage of teams willing to take an incentive-laden risk on Conforto, who missed all of 2022. But he’s only 29 (turns 30 on March 1). If he’s healthy, he’s a left-handed impact bat on the market, and there aren’t many out there.

Rangers sign SP Jameson Taillon: Texas would be thrilled to get the type of production Taillon’s averaged the past two seasons in New York: 30 starts, 4.08 ERA/4.16 FIP, 3.83 K/BB.