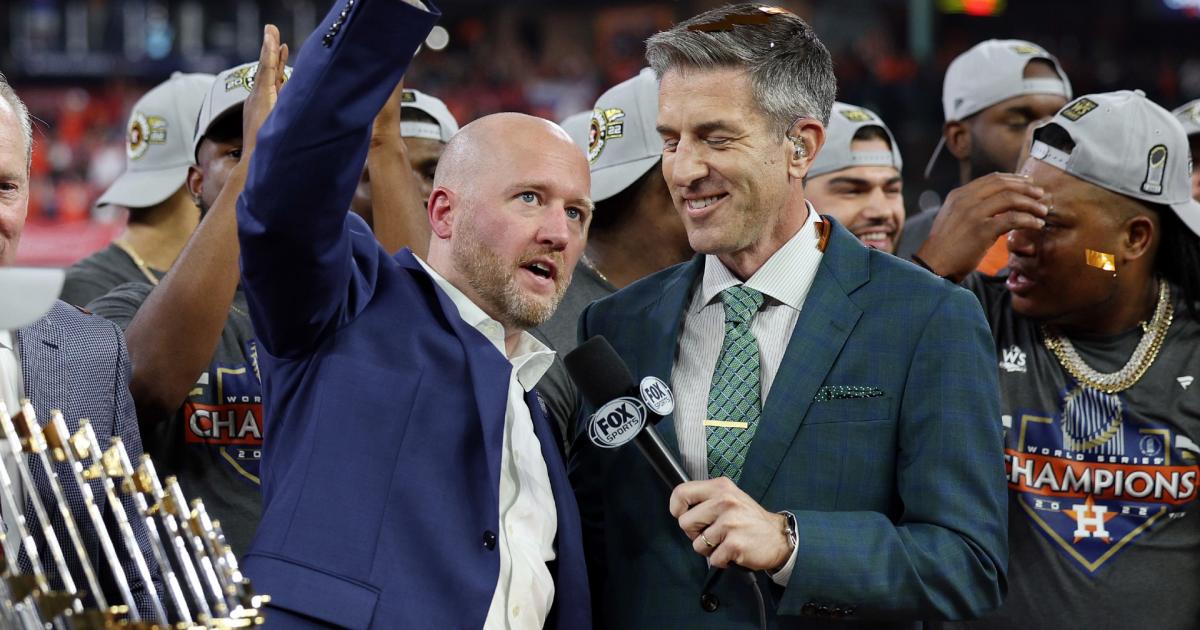 A week after winning their second World Series title, the Astros are making major changes to their front office. James Click, the architect of Houston’s championship-winning roster, is stepping away, per ESPN’s Jeff Passan. He reportedly rejected a one-year contract extension.

World Series-winning general manager James Click will not return to the Houston Astros after he rejected the team’s one-year contract offer.

Click’s departure is a shock, particularly for an organization that seems so committed to continuity. However, all that glitters is not gold. And after years of butting heads with owner Jim Crane, it seems the levee finally broke.

USA Today’s Bob Nightingale reported that Click did not leave via mutual consent. Rather, he was “fired.”

Houston #Astros GM James Click actually was fired. He was offered a one-year contract and raise from his $1 million salary on Monday, turned it down in pursuit of a longer contract, and was dismissed Friday after publicly airing his grievances at the GM meetings.

Here’s what you need to know about Click’s sacking:

While Houston was charging toward another Commissioner’s Trophy, there was real tension in the backroom. Crane, viewed as one of the best owners in baseball given Houston’s recent tradition of success, has earned plenty of goodwill among Astros fans.

But, as The Athletic’s Ken Rosenthal notes, that doesn’t necessarily make him easy to work with. Click, hired immediately in the aftermath of the sign-stealing scandal that marred Houston’s 2017 title, experienced that difficulty firsthand.

Click and Crane were said to have “stylistic differences”, per Rosenthal, with Crane known for acting quickly in the market. Click, meanwhile, is known to take a more holistic view, one that lends itself to slower, but more calculated, decisions.

The mix proved an effective one, with both playing a major role in building this year’s championship team. However, it made for an uneasy balance, one that further tipped over when Click brought in 11 scouts and two assistant GMs last offseason (all on Crane’s dime).

MORE: The 11 most intriguing MLB trade candidates this offseason

Couple their pre-existing issues with worries over whether Click was getting through to Crane — the 68-year old is said to keep a regular audience with Jeff Bagwell, Reggie Jackson and Enos Cabell — and it’s clear that Click was hanging onto his gig by a thread, even despite all of Houston’s success.

Click and manager Dusty Baker’s contracts expired during the World Series. Baker, 73, opted to return one a one-year deal. Click, 44 and seen as one of baseball’s brightest young minds, was also offered a one-year deal, one that promised to up his salary from $1 million. However, Click’s standing around the league made that contract offer — particularly the contract length — insulting. And he let his frustrations be known during league-wide GM meetings, something that is believed to have precipitated Crane’s decision to let his GM go.

Given the amount of talent on- and off-the-field that the ‘Stros have, it’s hard to imagine other prospective GMs will pass on a chance to take charge at Minute Maid Park. But Crane’s willingness to cut off such a talented figure certainly will raise red flags around the league, a stink that may prove hard to ward off, says Rosenthal.

Crane evidently doesn’t care. Maybe he shouldn’t care. But his handling of Click is another unfortunate episode for a franchise that has had too many under his ownership, a franchise that should be basking in the glow of its untainted World Series title. It would be difficult to blame Click if he told Crane to stick his offer you-know-where.