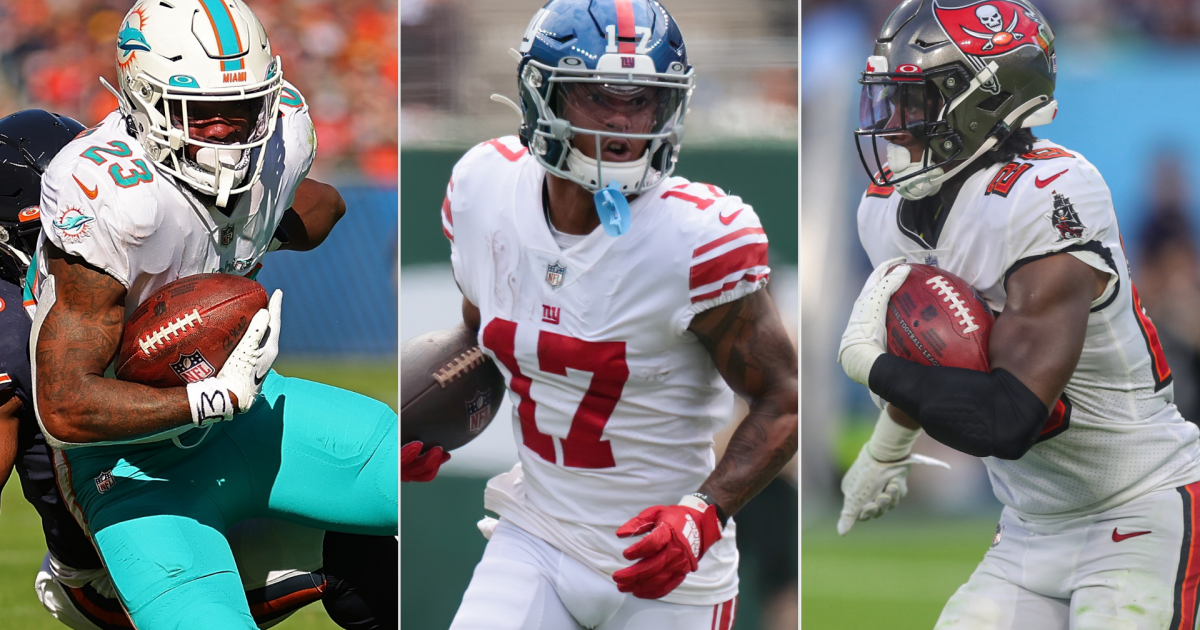 With two fewer teams on bye this week, fantasy football owners have a slightly larger pool of players to choose from for their start ’em, sit ’em decisions. With the fantasy football playoffs starting to come into focus, our Week 10 fantasy sleeper picks aim to help you find worthwhile under-the-radar picks that could overperform relative to their projections. Guys like Elijah Mitchell, Wan’Dale Robinson, and Rachaad White might find their way into lineup discussions this week, and we’re here to give our take on more players you should consider.

As always, please remember that the sleeper picks below could struggle this week. We always take some chances because picking a bunch of highly owned “must-starts” doesn’t do any good. You shouldn’t start the players below over proven studs, but if your roster is full of stars, then you probably don’t need our help. If nothing else, our sleeper picks can help you spot DFS values, as the prices of these players should be affordable.

Last week, we had more misses than hits, which can happen when you take chances. Despite our whiffs, we still had a good feel for wideouts, hitting on our picks of Josh Palmer and Darnell Mooney while also getting effective performances from Justin Fields and the Bengals’ D/ST. We’ll see if we can keep it going with this week’s potential surprises and breakouts.

Let’s get to it with our Week 10 sleeper picks.

Khalil Herbert, Bears vs. Lions (Vinnie Iyer). The Bears have a great matchup for their run-heavy offense at home, and this week Justin Fields won’t bogart all the production.

Elijah Mitchell, 49ers vs. Chargers (Matt Lutovsky). Mitchell (knee) hasn’t played since Week 1, but he’s expected back this week and could immediately see a key role as Christian McCaffrey’s backup. L.A. allows the fourth-most total rushing yards and second-most fantasy points per game (FPPG) to RBs this year, so if he gets 10-plus carries, he could do enough to pay off as a flex. Jeff Wilson Jr. saw six touches in San Francisco’s last game, and Mitchell has more talent and upside.

BONUS: Rachaad White, Buccaneers vs. Seahawks (Lutovsky). There’s been chatter about White taking over the Bucs’ starting job soon, and while we’re not expecting that this week, we are taking note of his increased workload. White had a season-high 11 touches in Week 9, and Leonard Fournette played just 62 percent of snaps. If White gets another 10-plus touches, he could produce flex-worthy numbers against a Seahawks’ defense allowing the ninth-most FPPG to RBs.

Trevor Lawrence, Jaguars @ Chiefs (Iyer). He should get it done with garbage volume in the second half with just enough dynamic weapons opposite Mahomes and the game setup makes you feel better with high total.

Jacoby Brissett, Browns @ Dolphins (Lutovsky). Brissett is quietly throwing more than most fantasy owners realize. He’s averaged 267.3 passing yards over his past three outings, and he’s posted at least 230 yards in five straight games. Against the Dolphins, who allow the most FPPG to QBs, he has a high floor and a solid ceiling.

Darnell Mooney, Bears vs. Lions (Piva). Justin Fields seems to have figured some things out over the past few weeks, and one of those things is that Mooney is an upper-echelon receiver. The Lions are the gift that keeps on giving for passing offenses, so we’re all over Mooney this week.

Michael Gallup, Cowboys at Packers (Iyer). The Packers are hurting in pass defense with Eric Stokes (knee, ankle) battling an injury, which means Gallup will get a shot for a long score with resumed volume with Dak Prescott.

Wan’Dale Robinson, Giants vs. Texans (Lutovsky). Robinson crashed and burned in his last outing, catching just two-of-three targets for 15 yards, but he still profiles as New York’s best receiver. The Texans have been stingy against fantasy receivers this year because of a lack of TDs, but they’re still below average in terms of passing yards allowed. Robinson still has upside and should bounce back with another seven-plus targets as he saw in Week 7.

Greg Dulcich, Broncos @ Titans (Piva). I’m stacking Dulcich with Wilson in hopes that their chemistry continues to evolve coming out of Denver’s bye week. The 6-3, 245-pound rookie has caught 10 of his past 14 targets for 138 yards, and he now draws a Titans squad that has allowed the fourth-most receiving yards to tight ends this season.

Cole Kmet, Bears vs. Lions. (Iyer). We’re not chasing points from the past two weeks. We’re simply exploiting how much the Lions stink against the tight end.

Cade Otton, Buccaneers vs. Seahawks (Lutovsky). Even if Cameron Brate (neck) returns, Otton has done enough to stay in the lineup. Over his past three games, he’s caught 11-of-16 targets for 147 yards and a TD. That includes two games with over 60 yards. The Seahawks allow the most FPPG to TEs, so even if Otton splits snaps with Brate, he can pay off as a low-end TE1.

New York Giants vs. Texans (Piva). The Giants got an extra week to prepare for Davis Mills and the Texans, who have the fifth-worst scoring offense and have amassed the fourth-fewest total yards. New York might win by a Giant margin.

Las Vegas Raiders vs. Colts (Iyer). Sam Ehlinger is now the overwhelmed young QB to go after for cheap points.

Arizona Cardinals @ Rams (Lutovsky). Arizona has been a big-play machine over the past four games, posting six takeaways and four D/ST touchdowns. They give up plenty of points, you’ll take your chances with the Cards against a Rams’ offense allowing the most FPPG to D/STs.