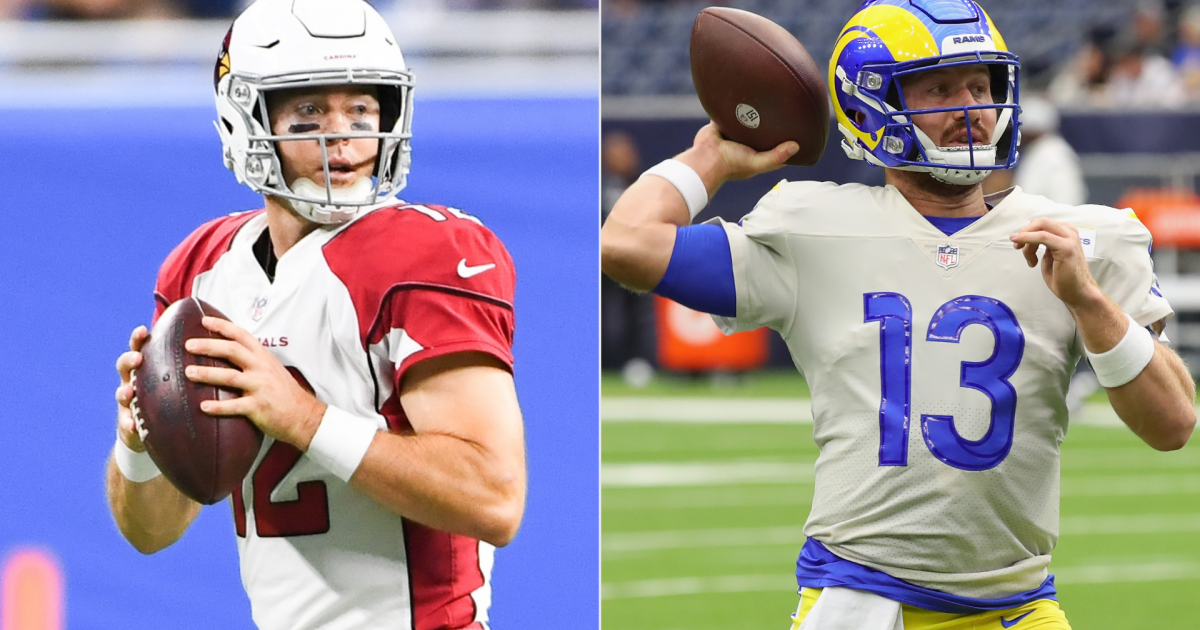 The first Rams vs. Cardinals game of the 2022 NFL season featured a duel between quarterbacks Matthew Stafford and Kyler Murray.

The second meeting between the NFC West rivals will look a lot different. Why? Because neither of the big-money quarterbacks will be playing this time around.

Both Stafford and Murray were dealing with injuries in the lead-up to Week 10, and each was considered questionable for the contest.

There was some optimism that each could play after they both practiced on Friday. However, neither is quite ready to take the field on Sunday.

Instead, John Wolford will try to lead the Rams to a much-needed win while the Cardinals will turn to the experienced Colt McCoy to be their quarterback. Here’s what to know about the two No. 2 signal-callers — and exactly why they are starting — as they prepare for a battle of the backups in Los Angeles.

MORE: Why Ezekiel Elliott isn’t playing vs. Packers in Week 10

Why is John Wolford starting for the Rams?

Wolford is starting for the Rams because Matthew Stafford is unable to play. Stafford spent the week in the NFL’s concussion protocol and while he logged a limited practice on Friday, the Rams weren’t comfortable playing him against the Cardinals.

As such, Wolford will be thrust into action for the first time in 2022 and he will make his first start since the 2020 season. He won his lone career regular-season start, which also came against the Cardinals, and he completed 22 of 38 passes for 231 yards, no touchdowns and an interception in the 18-7 victory.

Wolford, 27, starred at Wake Forest during his college days but failed to make the Jets as an undrafted free agent in 2018. He played for the Arizona hotshots in the now-defunct AAF before signing with the Rams in 2019. He has remained in Los Angeles ever since and has been the team’s primary backup since 2020.

What is Matthew Stafford’s injury?

Stafford is dealing with a head injury, as he was placed in the NFL’s concussion protocol on Tuesday, Nov. 8. He played the entirety of Los Angeles’ 16-13 loss to the Buccaneers in Week 9, so it’s unclear at which point he suffered the injury.

Stafford was able to return to the practice field on Friday, but he only do so on a limited basis. He was considered questionable for the game against the Cardinals, but the Rams ultimately decided to roll with Wolford instead.

That said, Sean McVay said that Stafford was “making good progress” during a Friday news conference. As such, Stafford’s absence may not be a long-term one; he may be able to return in Week 11 against the Saints.

Why is Colt McCoy starting for the Cardinals?

The Cardinals are starting McCoy in place of Kyler Murray as their normal starting quarterback deals with a hamstring injury.

McCoy, 36, has been in the NFL since he was a third-round pick by the Browns in the 2010 NFL Draft. McCoy has a career record of just 10-23, but in recent seasons, he has been a solid backup quarterback.

McCoy has made at least one start in every season dating back to 2018. That includes three with the Cardinals last season, during which he completed 74.7 percent of his passes for 740 yards, three touchdowns and an interception. He went 2-1 in those starts and the Cardinals will hope he can lead them to similar success in 2022 as long as Murray is sidelined.

What is Kyler Murray’s injury?

Murray is dealing with a nagging hamstring injury that will keep him out of action in Week 10. He was able to log limited practices on Thursday and Friday, but he was viewed as a game-time decision.

However, NFL Network’s Ian Rapoport reported that Murray was moving “very gingerly” so it was unlikely he would suit up.

#AZCardinals QB Kyler Murray, listed as questionable with a hamstring injury, will workout pre-game to see if he can go. But going into the workout, it is viewed as unlikely that he plays, per me and @MikeGarafolo. He’s still moving very gingerly.

Murray’s status will need to monitored moving forward, as it is a soft-tissue issue. He has dealt with a hamstring injury in the past, as he suffered one in Week 15 of the 2022 NFL season. He was replaced in that contest by Brett Hundley but returned to action in Week 16.

The Best Man: The Final Chapters Limited Series Trailer Reunites Old Friends
Why I will always love The Bodyguard
Show of the Year 2022 – Readers Mega Poll
‘Gone Girl’ Actress Lisa Banes’ Killer Gets One to Three Year Sentence
World Cup yellow cards rules 2022: How many cautions before suspension at FIFA tournament in Qatar?