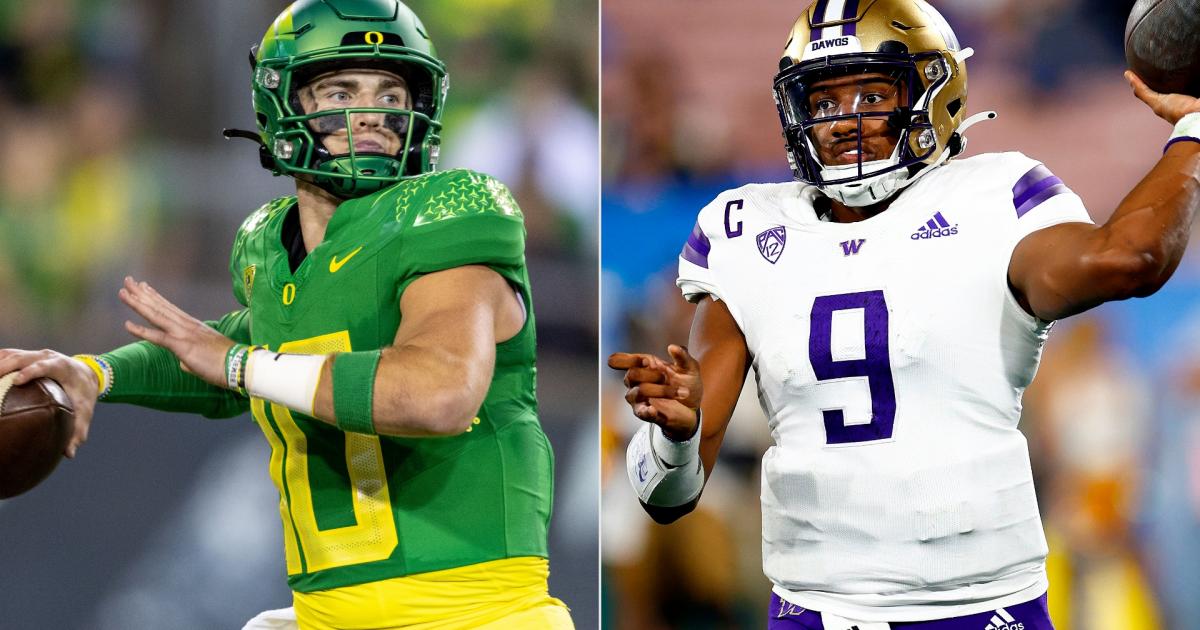 No. 6 Oregon hosts No. 24 Washington Saturday night at Autzen Stadium (7:00 p.m. ET on FOX) in a crucial Pac-12 conference battle. Oregon looks to continue its dominant play following its season-opening loss while Washington attempts to stay in the Pac-12 championship hunt.

After a tough start to the Dan Lanning era, the Ducks sit atop the Pac-12 standings with an unblemished conference record, steamrolling through their six opponents with a plus-118 point differential. Oregon is fresh off a blowout victory over Pac-12 bottom-feeder Colorado, notching a 49-10 win over the one-win Buffaloes. Even after getting beat in all three phases against Georgia back in Week 1, if the Ducks continue to run the table, they make a real case to secure a bid to the College Football Playoff.

Meanwhile, Washington comes into Week 11 off a come-from-behind 24-21 win over then-No. 23 Oregon State. The Huskies are led by ex-Indiana QB Michael Penix Jr., whose been spinning the ball all over the field this season, leading one of the better passing attacks in college football. Can Washington keep up with Oregon’s offense and end their College Football Playoffs hopes, or will the Ducks continue to breeze through conference play?

Here’s everything to know about betting on the Week 11 matchup between the Ducks and Huskies:

— According to BetQL, Oregon is 7-1 ATS this season as a favorite, covering their past five games.

— Conversely, Washington has failed to cover in five straight games as a favorite and had been favored in every game this season.

— Washington’s also underperformed in the betting markets on the road this season, failing to cover the spread in all three of their road games.

Take advantage of BetQL’s 3-day free trial and see all of our best bets across all sports, including college football, NFL, and MLB!

—The Bo Show: Nix’s revitalization at Oregon is great for college football, as the Ducks have a legit chance of returning to the College Football Playoff for the first time since its inception back in 2014. The senior signal-caller enters Week 11 with the sixth-highest QBR (88.3) to go along with an impressive 22:5 TD-to-INT rate. Nix’s ability to remain calm under pressure is a massive plus, sporting a 73.5 adjusted completion percentage on 63 drop-backs to go along with zero turnover-worthy plays this season. Will Washington’s defense be able to force Nix to make a mistake or two? Based on these stats, it seems unlikely.

—Can the Ducks’ secondary limit Penix and the Huskies passing attack?: As stable as Nix has been for the Ducks, Penix has been just as impactful for the Huskies. Penix enters Week 11 leading the FBS in passing yards (3,232; 359.11 YPG) with a similar 23:5 TD-to-INT ratio as Nix. Oregon’s defense is susceptible to the pass, allowing the 15th-most passing yards per game (276.6), which could spell trouble against the Huskies. That number is a bit inflated due to the game script, though, as Oregon’s consistently been ahead in games, forcing its opposition to employ a pass-heavy approach. That being said, Penix and the Huskies are the most potent passing attack the Ducks have faced since their season opener against Georgia, and they figure to have their way through the air.

—Red-zone efficiency: With an over/under in the low 70s, both offenses are likely going to have success consistently moving the ball. The difference in this game could potentially come down to how both offenses fare when the field shrinks in the red zone. Entering Saturday’s showdown, Washington and Oregon both sit in the top 50 of the FBS in red-zone efficiency, converting on 87 percent of their trips inside the 20. Converting at a similar clip will clearly result in a shoot-out, but if one team stalls out more than the other in the red zone or commits a turnover, we could see fewer points than expected.

Oregon’s offense is dialed in right now, and it’s unlikely the Huskies’ defense can do much to limit the Ducks’ effectiveness. On the other side of things, Washington’s passing attack is going to stress Oregon’s coverage, and the Huskies also figure to have their way moving the ball. Despite Oregon being a cover machine and Washington underperforming in the betting markets, the Huskies should manufacture enough offense to keep this game closer than the near two-touchdown spread.