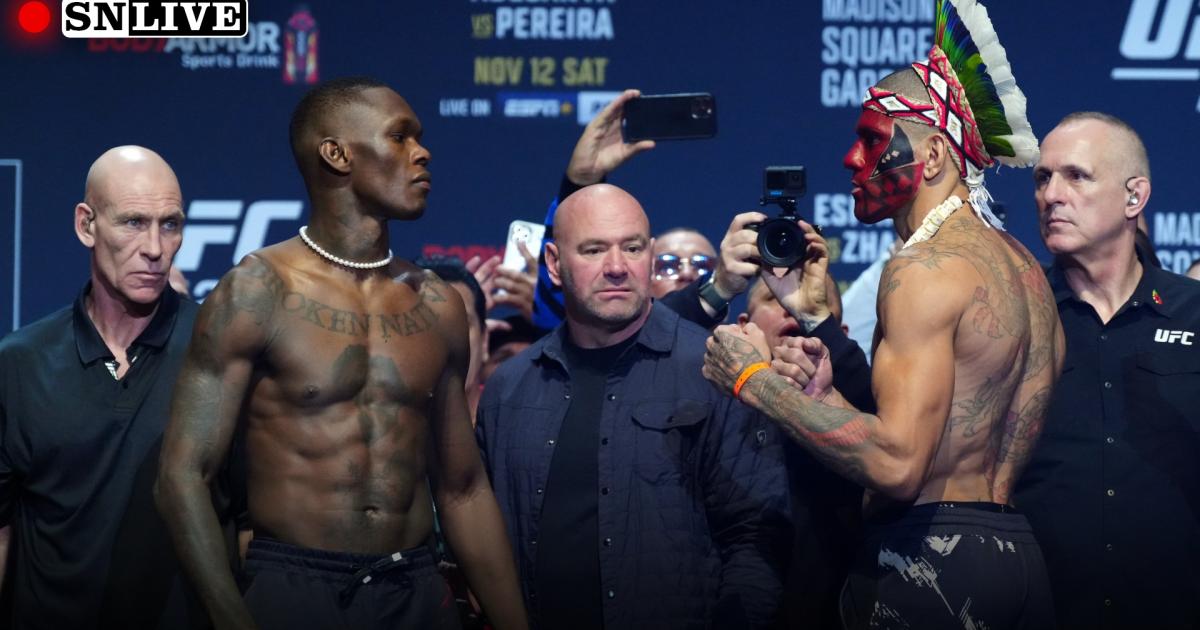 Israel Adesanya is expecting a true fight at UFC 281 when he faces off against Alex Pereira on November 12. Unlike previous bouts for Adesanya, the clash for his UFC middleweight title won’t feature a gun-shy Pereira, a respected kickboxer who holds two wins over Adesanya.

The fight for Adesanya’s middleweight title will be inside New York’s Madison Square Garden.

Although Pereira (3-0 in the octagon) presents a different challenge compared to Jared Cannonier, Yoel Romero, and Robert Whittaker, Adesanya (12-1) believes his inexperience in the cage will play a factor. Adesanya stated at the UFC 281 press conference that he will take Pereira down to the floor.

“No, I don’t think [he presents the toughest challenge],” Adesanya told ESPN, via MMA Fighting. “He’s very one-dimensional. He’s early on in this game as well, so I’m even glad to get him now. I don’t know who he has in his corner. I know he has Glover [Teixeira] and his boxing coach. I don’t know what their background is, I don’t really mind, I just worry about me. I definitely know he’s not as smart as me in the cage. I know that for a fact.”

MORE: Sign up to watch the UFC 281 PPV, exclusively on ESPN+

Adesanya joined the UFC in 2018 after losing his last kickboxing bout against Pereira. Winning the UFC middleweight title in 2019, he has defended the belt five times.

Pereira joined the UFC in 2021, and has beaten the likes of Andreas Michailidis, Bruno Silva, and Sean Strickland. At UFC 276, Adesanya said Pereira was “going to get frozen, like Elsa.” With bragging rights over Adesanya heading into the fight, Pereira is not intimidated by the champion. He proved that by heading into New York City’s Time Square to face the Disney star Adesanya compared him to.

The UFC strawweight title is also on the line as Carla Esparza defends the title against Zhang Weili. A two-time champion, Esparza won the belt during the finale of The Ultimate Fighter in 2014 but lost it against Joanna Jedrzejczyk. She regained the title in a controversial affair against Rose Namajunas in May at UFC 274.

Zhang beat Joanna in 2020 to win the title. Losing the belt and two in a row to Rose Namajunas, Zhang stormed back by knocking out Joanna in June. Joanna retired after.

Esparza, mercilessly booed by the UFC fans in New York this week, is the heavy underdog. She isn’t letting any doubt of her reign get in the way of her goal.

“It is funny,” Esparza told MMA Fighting. “Before, I would say early in my career it would kind of bum me out like ‘hey, I’m a good fighter!’ But now it just makes me smile and laugh. Like I know that I have a little secret, but people [say] this is going to happen, or that is going to happen, and I’m just like OK, but deep down I have my secret like you’ll see.

MORE: How does scoring work in MMA?

The Sporting News will be providing live coverage and highlights from UFC 281. Stay tuned!

11:40 p.m.: The co-main event is up next as Carla Esparza defends her women’s strawweight title against former champion Zhang Weili.

11:31 p.m.: It won’t matter if that second round was scored 10-8 because Poirier took advantage of a gassing Chandler, reversed a slam attempt to get his back and sunk in a rear naked choke for the finish. Unreal. But it’s what we expected. Absolutely stellar.

11:28 p.m.: Chandler just had a round where he snuffed out Poirier’s momentum with an early takedown and dominated with submission attempts and ground and pound. Could it be a 10-8 round?

11:22 p.m.: What an unbelievable round. Chandler had Poirier in deep trouble in the first round with big punches, a takedown and even deployed a German suplex. But Poirier roared back at the end of the round and nearly finished Chandler with a left hook and a barrage of punches. This fight is delivering!

11:07 p.m.: The people’s fight is up next as Dustin Poirier and Michael Chandler square off in a highly anticipated showdown that is expected to be the “Fight of the Night.” With eight finishes in 11 fights, these two have a lot to live up to.

10:57 p.m.: It’s been a hell of a career, Frankie Edgar. But the ending to this was bittersweet as Chris Gutierrez sent Edgar into retirement with a brutal knee to the face in the first round. Gutierrez was sharp from the outset with his striking and eventually baited Edgar to duck his head right into a knee that put the UFC legend to sleep. The arena fell silent as the realization that this was the last time we’d see Edgar in the Octagon. Props to Gutierrez and what a career, Frankie.

10:45 p.m.: After 15 years with the UFC, Frankie Edgar is having his final fight against Chris Gutierrez. Win or lose, Edgar is a legend in this sport as a former lightweight champion and a career that saw him face just about every notable name in the sport. Soak it in one last time as Edgar walks out to The Notorious B.I.G.’s “Kick in the Door” in New York City.

10:35 p.m.: After surviving a kneebar attempt, Dan Hooker’s striking was the difference maker as he finished Claudio Puelles with a kick to the body in the second round. Puelles had Hooker in deep trouble midway through the first round as he went for a kneebar but Hooker calmly escaped and dissected his opponent with his standup. Puelles repeatedly tried to get the fight to the canvas but was unable to do so and found himself on the wrong end of a series of punches and kicks. With no way to get the fight to the mat, Puelles was ripe for the taking and was dropped by a kick to the torso that ended the fight. Hooker is back in the winning column after a brief rough patch.

10:15 p.m.: City Kickboxing is 1-1 tonight as Dan Hooker hopes to put the team back into the winning column against submission specialist Claudio Puelles in the PPV opener.

10:00 p.m.: After an exciting showing on the prelims, the UFC 281 main card is set to begin. Here are my predictions!

My #UFC281 main card predictions in under 60 seconds.

Now go and make yourself some money. Or something. pic.twitter.com/epvDW7TzsN

9:45 p.m.: And that is our sixth first round finish of the night as Renato Moicano submits Brad Riddell in the first round with a rear naked choke. Moicano was dominant from the start with his striking but eventually got to Riddell’s back and sunk in the choke. Impressive performance from the Brazilian.

9:34 p.m.: We’ve had five first round finishes on the prelims and the final fight before the PPV begins is expected to be a banger between Renato Moicano and Brad Riddell. They are both in need of wins as Riddell has dropped two in a row with losses to Jalin Turner and Rafael Fiziev while Moicano was thumped by Rafael dos Anjos in his last outing.

9:14 p.m.: Welp, that didn’t go the way Reyes expected. Spann decimated the former title challenger in the first round with a jab. Yes, a jab! Spann’s power is for real and fired a wicked jab that put Reyes to sleep. That was frightening. Oh, and then Ryan Spann revealed that this is the first fight that he ever had a full training camp for. Sheesh.

9:08 p.m.: Up next is Dominick Reyes facing off against Ryan Spann. Once upon a time, Reyes was arguably the better man when he faced Jon Jones for the light heavyweight title in 2020. He lost to former champion Jan Blachowicz and current champion Jiri Prochazka in his next two fights and hopes to break a three fight losing streak tonight.

8:52 p.m.: Erin Blanchfield has put the women’s flyweight division on notice with an absolutely dominant performance against Molly McCann where she took her down, put her in a crucifix, pummeled her with ground and pound and then secured a kimura for a submission finish. She’ll be in the top 10 on Monday but she might not be far from a title opportunity at only 23 years of age.

8:45 p.m.: So, what have you missed? Well, three hellacious first round knockouts as Carlos Ulberg, Michael Trizano and Matt Frevola each put in their ticket for a performance of the night bonus. With so many great fights on this card, these three certainly upped the ante for bonuses.

When is UFC 281: Israel Adesanya vs. Alex Pereira?

How to watch UFC 281: Israel Adesanya vs. Alex Pereira

The main card for UFC 281 is available in the U.S. and Mexico on the ESPN+ subscription streaming service for a pay-per-view cost. Earlier fights are viewable live on ESPN+.

In the United Kingdom, the main card will be available on BT Sport, with the prelims available on UFC Fight Pass.

In Australia, the main card will be on Main Event, Kayo Sports, Fetch TV, and UFC PPV on UFC Fight Pass.

Israel Adesanya vs. Alex Pereira PPV price: How much does UFC 281 cost?

In the U.S., the UFC 281 main card is available via pay-per-view on ESPN+, which also requires a subscription. The PPV price for UFC 281 is $74.99 for current subscribers. New subscribers can pay a bundle price of $99.98 for the UFC 281 pay-per-view and an ESPN+ annual subscription, which offers savings of more than 30 percent.

MORE: Sign up to watch the UFC 281 PPV, exclusively on ESPN+

Click here to learn about the different pricing and bundling options with the ESPN+ platform.

The Sporting News may earn an affiliate commission when you sign up for a streaming service through our links. The Sporting News’ affiliates have no influence over the editorial content included in this article.