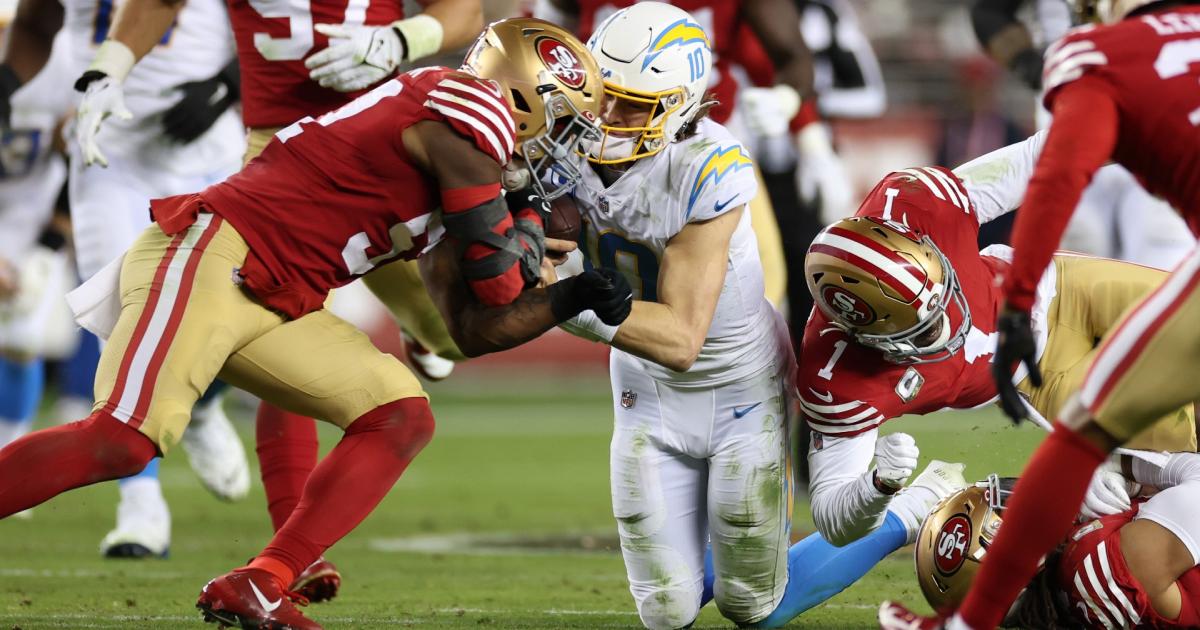 The Chargers have had plenty of injury woes in the 2022 NFL season. For a moment during the team’s “Sunday Night Football” game against the 49ers, Los Angeles fans collectively held their breath over what could have been the team’s biggest injury.

Quarterback Justin Herbert was the recipient of a helmet-to-helmet hit from linebacker Dre Greenlaw late in the first half. Herbert had darted up the middle for a 5-yard gain and was being taken down by another player when Greenlaw connected.

Herbert left the field to be evaluated by medical personnel. Greenlaw was ejected from the game.

#49ers LB Dre Greenlaw has been ejected for this helmet-to-helmet hit on #Chargers QB Justin Herbert.

Chargers fans were able to breathe easy after Herbert was medically cleared to play in the second half.

Justin Herbert has been cleared to re-enter the game.

NFL rules are pretty clear. Under the section governing the use of the helmet, the rule reads: “It is a foul if a player lowers his head and makes forcible contact with his helmet against an opponent.” If the foul is deemed to be flagrant, the offending player can be ejected.

The “flagrant” aspect of the rule stoked the online controversy that flared up after Greenlaw’s ejection. Some argued that Greenlaw was just trying to make a tackle on a runner when Herbert started to go down and then fell into the helmet-to-helmet contact.

The resounding opinion – even from Chargers media – seems to be that Dre Greenlaw should not have been ejected.

A personal foul, I understand. But how can the officials prove there was malicious intent from Dre Greenlaw — enough for an ejection — on a bang-bang play where Justin Herbert was falling down and therefore a moving target?

So everyone in the booth agreed Greenlaw tried to lead with his shoulder but the target moved and it shouldn’t be a flag. But not only did they throw the flag, they also threw Greenlaw out the game. Smh

Justin Herbert was a runner that was hit by three defenders in a split second, the third being Greenlaw, who had his head up and was loading up for the tackle before Herbert changed levels. Defenders in the NFL are being held to unrealistic and ridiculous standings.

Horrible call on Greenlaw. Absolute garbage to disqualify a player for a hit on a player with no defenseless protection who was launched forward from a tackle from the other direction.

That’s a brutal and undeserved ejection for Greenlaw.

Greenlaw posted “Free me” on his Instagram story after leaving the game.

Backup QB Chase Daniel took over for Herbert after the hit. Daniel threw two incomplete passes and was sacked, forcing LA to attempt a field goal. Cameron Dicker hit from 40 yards out to extend Los Angeles’ lead to 16-10 at the half.

MORE: Dicker gets message from Carrie Underwood after missing concert to kick for Chargers