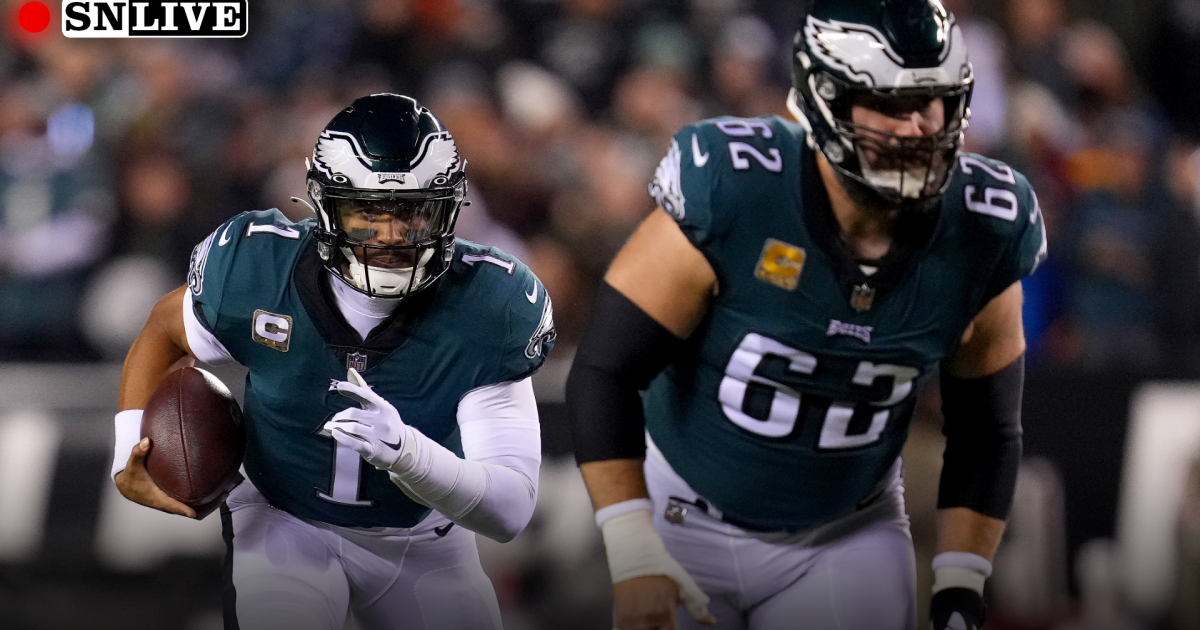 With their bye week in the rearview mirror, the undefeated Eagles get back in action Monday night as they host one of their NFC East rivals, the Commanders.

Despite sitting at 8-0, Philly still isn’t in the clear. The team holds a slim lead over the Giants (7-2) in what has been an unexpectedly strong NFC East in 2022. The Commanders (4-5) occupy the division’s basement.

Last time out, the Eagles took down the Texans 29-17 on the road. Jalen Hurts was fantastic once again, going 21 of 27 through the air with two touchdowns and no interceptions. He remains in the thick of the MVP race as the campaign moves into the latter half.

Nick Sirianni’s squad has also been playing spectacular defense. If the Eagles finish with a positive turnover ratio Monday, they’ll be the first team to do that in each of their first nine games to start a season since the 1958 Colts.

On the other side, the Commanders are coming off a heartbreaking 20-17 home loss to the Vikings. Washington held a 10-point lead in the fourth quarter, but it slipped away after the defense couldn’t get a stop down the stretch. Still, there’s cause for optimism as the team put together an impressive three-game winning streak before the loss.

Monday marks the first time Washington has played on “Monday Night Football” since 2018.

The Sporting News is tracking live scoring updates and highlights from Commanders vs. Eagles. Follow along for all the key moments from the Week 10 matchup.

9:37 p.m. — But they can’t get anything going, and a Hurts incompletion deep to A.J. Brown brings up 4th and 5. The Commanders are actually going to get the ball back with a chance to stretch their lead.

9:33 p.m. — The Eagles will get the ball back with about a minute and a half left and a chance to tie or take the lead heading into halftime.

9:31 p.m. TOUCHDOWN — INCREDIBLE. Robinson refuses to go down, muscling his way into the end zone to give Washington the lead! Another magnificent drive for the Commanders (this one was 16 plays and 86 yards) ends in a touchdown! Who saw this coming?

Brian Robinson would not be denied! @BrianR_4 | #HTTC

9:24 p.m. TWO-MINUTE WARNING — Finally, the Commanders come up short on a 3rd down play as McLaurin gets dragged down just shy of the marker. But on 4th and 1, Samuel bulldozes ahead for a first down. That’ll take us to the two-minute warning.

9:22 p.m. — Washington has been absolutely amazing on 3rd down so far this game. The team is now 8 of 10 on 3rd down conversions. They just got another one thanks to another completion to McLaurin.

9:19 p.m. — On the next play, a bad snap goes flying over Heinicke’s head, but he manages to scoop the ball off the turf and throw it out of bounds to avoid a massive loss. That was a really nice heads up play.

9:17 p.m. — The Commanders convert ANOTHER 3rd down! Heinicke goes over the middle for Curtis Samuel, who scurries for a big gain of 23 yards to move the chains.

9:11 p.m. INTERCEPTION — Well, make that 8 of 12 now. Hurts launches one deep down the field into double-coverage for A.J. Brown, and it gets picked off by Darrick Forrest! That was a fantastic play to make the interception. The Commanders will take over near their own 20-yard line!

Just took it right away from him 🍪 @_Dfoe5

9:09 p.m. — Hurts quickly faces 3rd and 5, but he delivers another important throw to DeVonta Smith to move the chains again. He’s now 8 of 11 on the night.

9:05 p.m. — Woof. Heinicke loses track of the clock, and a well-designed direct snap play (that would have easily picked up a first down) goes to waste due to a delay-of-game penalty. Big self-inflicted wound there for the Commanders. Joey Slye is coming on for a field goal attempt now.

9:03 p.m. — On 3rd and short, Robinson gets buried behind the line of scrimmage to set up 4th down. It looks like “Riverboat” Ron Rivera might leave the offense on the field and go for this…

9:02 p.m. — On 3rd and 8, Heinicke finds McLaurin again for another big first down. McLaurin is off to a nice start in this one.

9:00 p.m. — An illegal contact call on Darius Slay moves the Commanders into Eagles territory. On the next play, Robinson runs for a short gain, but more importantly, Josh Sweat is down hurt. He’d be a big loss for this Philly defense.

8:52 p.m. — The quarter ends with Heinicke completing it to McLaurin for another Washington 1st down. That was a wild and entertaining quarter to start this game.

8:47 p.m. TOUCHDOWN — Hurts finds Dallas Goedert in the end zone on a jump pass and the Eagles retake the lead!

8:46 p.m. — An offensive holding call backs the Eagles up 10 yards, but on the very next play, a deep shot to Smith in the end zone draws a defensive pass interference penalty on Benjamin St-Juste. It’ll be first and goal for Philly.

8:44 p.m. — Facing 3rd and 10, Hurts goes to his other main target, DeVonta Smith, for a pickup of 11 yards to move the chains. It looks like Brown is going to come back in now. A big sigh of relief from everyone in the building tonight.

8:42 p.m. — Even without Brown, Hurts continues to march his offense down the field. Two more completions (to Jack Stoll and Zach Pascal) puts them near midfield.

8:36 p.m. TOUCHDOWN — What an answer! Antonio Gibson leaps majestically over the pile, crossing the plane for a Commanders touchdown! An impressive 13-play, 75-yard drive by Washington.

8:35 p.m. — Another completion, this time to Jahan Dotson, sets up 1st and goal for the visitors from about the 5-yard line.

8:32 p.m. — On 3rd and 2, Heinicke finds a wide open Terry McLaurin deep down the field for a big gain of 26 yards. The Commanders suddenly find themselves with a red zone opportunity.

8:28 p.m. — Robinson rushes for a Commanders first down, their first of the night. His story really is incredible, and he keeps on getting better on the field each week as he continues to recover from being shot in an attempted carjacking prior to the start of the season.

8:23 p.m. TOUCHDOWN — What a wild start to this game! Hurts cashes in on the turnover with a sneak up the middle for a touchdown!

8:21 p.m. FUMBLE — But on the next play, Philly gets it right back! Josh Sweat comes flying in on Heinicke’s blind side, and the ball hits the turf! The Eagles recover to set up their offense in fantastic field position!

First down? Josh isn’t Sweating it.

8:20 p.m. — Oh man. The Commanders’ drive is going to continue, and it’s because of a huge mental error by the Eagles on special teams. Reed Blankenship roughed the punter, giving Washington a free first down.

8:19 p.m. — A pair of short runs by Brian Robinson Jr. sets up 3rd and 5, and Heinicke’s first throw of the night goes off the hands of his receiver to bring up 4th down. The night starts with a three-and-out from the Commanders.

8:18 p.m. — Antonio Gibson has a nice return on the opening kickoff wiped out by a holding penalty. Heinicke and his offense will go to work from inside their own 10-yard line.

8:16 p.m. — The Eagles won the coin flip and elected to defer, so the Commanders will get the ball first on offense. Let’s play some football.

8:09 p.m. — Kickoff is drawing closer from Philadelphia. Who will triumph in this NFC East battle?

4️⃣ warmin’ it up pic.twitter.com/ZDCbyXpTzV

Commanders vs. Eagles will kick off at 8:15 p.m. ET from Lincoln Financial Field in Philadelphia. The weather forecast calls for clear skies with temperatures in the high 30s Fahrenheit.

What channel is Commanders vs. Eagles on today?

The game will be broadcast nationally on ESPN. Joe Buck (play-by-play), Troy Aikman (color commentary) and Lisa Salters (sideline reporting) will be on the call from South Philly.

A live stream will also be available with fuboTV, which offers a free trial. Viewers in Canada can tune in with DAZN, which features every NFL game.