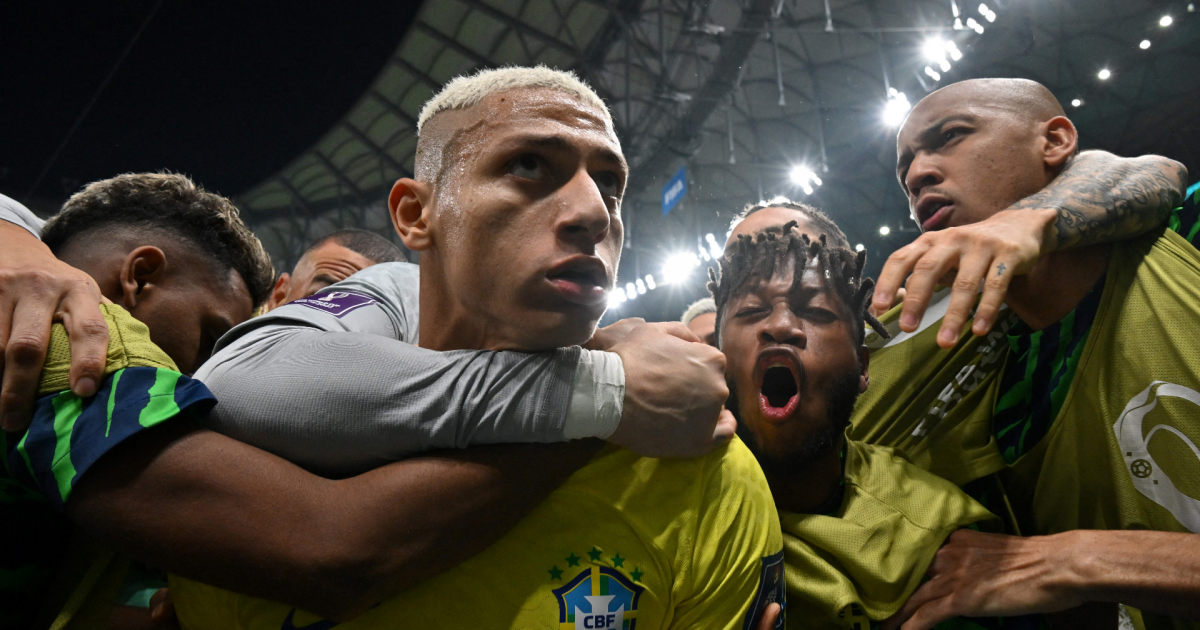 Neymar ambled out for the second half while still getting dressed and Brazil’s World Cup opener against Serbia restarted while he was still tying his shoelaces.

He was up and running soon enough, arriving in the opposition penalty area as Raphinha forced a defensive error and drew a fine save from Vanja Milinkovic-Savic.

It was a passage of play that seemed to sum up the Selecao’s first steps at Qatar 2022. Not getting going straight away but still very effective.

By the time Richarlison smuggled the ball home on the rebound in the 62nd minute following fine work by Neymar and Vinicius Junior, Tite’s side had cast themselves somewhere in the middle of the contenders for the trophy.

They hadn’t gone ballistic and racked up goals like England or Spain — fairly understandably given the imposing blend of physicality and technical quality that Serbia present. Nor had they fallen in a chaotic puddle of their own making like Argentina or Germany.

In this World Cup of extremes, Brazil felt chillingly proficient. Handily, Richarlison flicked up Vincius’ outside-of-the-boot cross and swivelled to score an incredible volley to seal a 2-0 win, sending the world into a Jogo Bonito swoon. If such moments of magic and flair distract from the ruthless winning machine underneath, you sense Tite won’t mind one bit.

After enjoying the luxury of being able to sit back and see what everyone else at the World Cup has to offer, here’s how Brazil showed they can meet any challenge thrown their way in Qatar.

🤩 Beating Richarlison for Goal of the Tournament will be a tough job!

Vinicius can be the breakout star of Qatar 2022

Over the past two seasons, Vinicius has become invaluable to Real Madrid but his stock hasn’t risen accordingly with the national team. Heading into this first Group G encounter, he had 16 caps and a solitary goal for Brazil. Only seven of those appearances had been from the start.

Vinicius was unable to add to his goal tally but it’s hard to imagine too many more of his Brazil outings will be cameos from the bench. A blistering early run around wingback Andrija Zivkovic set the tone and Serbia frequently felt the need to double up on the left winger.

That creates obvious problems against a side packed with forward talent. A fluid Brazil attack meant Vinicius was able to both drive from deep and punish the opposition backline at close quarters near the box.

Richarlison’s highlight-reel finish means his assist will be something of an afterthought, but don’t be surprised if Vinicius produces a picture-book moment or two of his own very soon.

Danilo is a secret weapon for Brazil coach Tite

Tite’s decision to forego his usually measured 4-2-3-1 formation raised a few eyebrows. Having Casemiro as the lone holding midfielder against a side of Serbia’s capabilities felt a little cavalier.

A final shot count of 22-5 showed it hadn’t been a particularly even tussle in the final analysis, with Brazil having established almost total control of midfield in the final half-hour.

A factor in this was that Casemiro wasn’t always the lone midfield pivot. Tapping into the playbook he learned under Pep Guardiola at Manchester City, Danilo regularly tucked inside to act as an extra midfielder. A simple passing option was always there and Brazil were never undermanned.

An added significance here is that tactic shows how well-grooved Brazil are under a coach who took over back in 2016. England and Spain’s wins under long-serving bosses Gareth Southgate and Luis Enrique similarly suggest that those sides with plenty of familiarity and club ethos will override the lack of preparation time allocated for this tournament better than most.

Raphinha shows how he can help Neymar shine

Back to that moment at the start of the second half. While Neymar had just got through his wardrobe malfunction, Raphinha was busy disrobing Nemanja Gudelj.

You don’t star for Marcelo Bielsa without being able to press, and Barcelona’s former Leeds United attacker does so with rabid tenacity. Raphinha’s near-opener was one of three times Brazil won the ball back in the opposition’s third and they snaffled 62 recoveries to Serbia’s 54, despite having the lion’s share of possession.

We saw plenty of Neymar’s ample qualities at Lusail Stadium, but tireless work out of possession isn’t always among them. With Raphinha around and Vinicius’ electric pace pinning opponents back, it doesn’t really matter. As Richarlison prolifically leads the line, Neymar has space to roam and cause damage, as he did on the opening goal.

The only problem for Tite now is whether he will be able to take any further part in the tournament, after Neymar hobbled off with 10 minutes to go and was seen in tears on the bench.

Raphinha’s work off the ball also bodes well in the wider context of the tournament. Saudi Arabia and Japan’s underdog triumphs were underpinned by pressing intelligently and setting traps, with more celebrated sides not looking as well drilled in such nitty-gritty elements.

Brazil are ready to match those efforts in terms of perspiration, while Casemiro and Danilo’s poise means they should be able to play through presses as well as anyone in Qatar.

On the evidence of their imposing opening win over Serbia, Tite’s team look to be a frighteningly complete proposition.