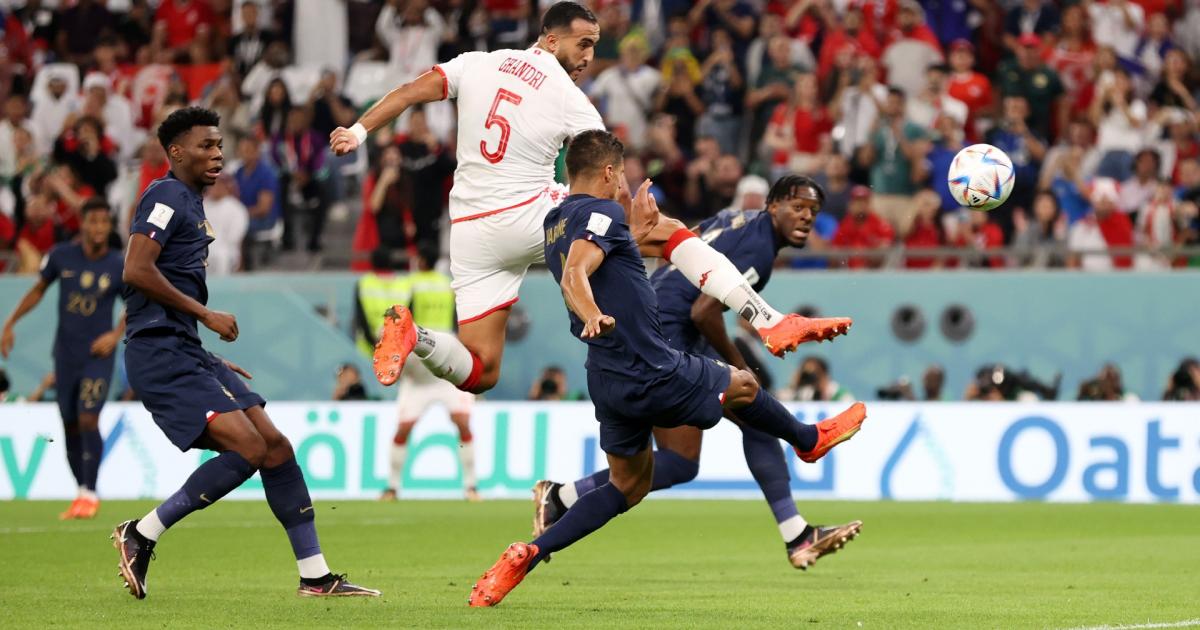 France boss Didier Deschamps has the opportunity to rest some of his key players in their final Group D match against Tunisia, with his side already qualified for the Round of 16.

However, the pressure is on for Tunisia and their prospects are precarious after they followed up a 0-0 draw against Denmark with a 1-0 defeat to Australia.

With Tunisia bottom of the group, they’ll need a win against the reigning champions to stand any chance of leapfrogging Denmark and Australia into second place.

The Sporting News is tracking live scoring updates and highlights for Tunisia vs. France at the 2022 World Cup. Follow below for complete results from the Group D match in Qatar.

MORE: Round of 16 World Cup 2022: Teams qualified, bracket, match schedule, fixtures and how it works

28 mins: Tunisia look like they might be starting to run out of steam here, and Wajdi Kechrida picks up the first yellow card of the night for a late, sliding challenge on Eduardo Camavinga.

25 mins: Kingsley Coman should do much, much better here. Youssouf Fofana drives at the heart of the Tunisia defence before slipping the ball to his left for the onrushing Coman. A first touch take him too wide, however, and the second is even worse, slicing the shot behind. France’s best move of the match.

23 mins: France definitely looking more assured now, moving the ball around at pace, although a long ball sets Wajdi Kechrida through one-on-one against Ibrahima Konate. The Liverpool central defender does well, though, holding him up and even playing the ball off the Tunisian to win a goal-kick.

20 mins: France look like they might have settled down a little, with Eduardo Camavinga looking considerably more comfortable going forward.

16 mins: Wonderful control and flick from Aissa Laidouni on the Tunisia right, knocking the ball between Eduardo Camavinga’s legs and winning a freekick.

13 mins: Wahbi Khazri wants a penalty as he goes down under Ibrahima Konate’s challenge, but he falls far too easily and nothing doing.

11 mins: France’s newlook side are struggling to find any coherence at the moment. They’re giving the ball away frequently and have failed to put a move of note together yet.

8 mins: Tunisia have the ball in the net as Nader Ghandri brilliantly flicks in a Wahbi Khazri freekick from the left… but the celebrations are cut short by the assistant referee’s flag. Fractionally offside, but another warning for France.

Tunisia finds the back of the net but the offside flag comes up pic.twitter.com/o55cl1Xb7F

4 mins: It’s been a positive start for Tunisia, who have the majority of the crowd on their side. Mohamed Ali Ben Romdhane makes a promising run down the left before Anis Ben Slimane wins a corner that Raphael Varane has to hook away from the France goalmouth.

1 min: An early wakeup call for Steve Mandanda, who has to race out to claim the ball as Anis Ben Slimane tries to muscle past Raphael Varane.

KICKOFF: Tunisia’s Wahbi Khazri gets us started and the final 90 minutes in FGroup D is underway.

5 mins from kickoff: The teams emerge from the tunnel, and the Group D denouement is moments away.

Counting down to kick-off ⏱#FIFAWorldCup | #Qatar2022

10 mins from kickoff: France, who need a draw to make sure of finishing first in Group D, are the first World Cup holders to reach the round of 16 since Brazil in 2006.

Tunisia kick off bottom with one point and need what would be only their third win in 18 World Cup matches to have any hope of overhauling Australia and Denmark to finish second. They also need Australia to not beat the Danes in today’s other game.

15 mins from kickoff: A landmark for France this evening, with Steve Mandanda in line to become his country’s oldest ever international. It’s also his 35th cap in a France career that started 14 years ago.

20 mins from kickoff: This is the fifth fixture between the sides, although a first competitive meeting. France have won two of the previous four games, drawing the other two including the most recent, a 1-1 friendly draw in May 2010.

25 mins from kickoff: France’s newlook squad are going through their paces. They’ll all be looking to make an impact here and force their way into Didier Deschamps’ thinking for the round of 16.

30 mins from kickoff: All to play for as Group D concludes. You can follow Australia v Denmark here.

40 mins from kickoff: A quick look inside the Tunisia dressing room; love that lighting!

50 mins from kickoff: Significant changes from both sides for this one. Tunisia make six from the side beaten by Australia, Wahbi Khazri – who plays his club football in France with Montpellier – coming in up front for his first start of the finals.

With qualification already assured Didier Deschamps opts to give most of his first-choice lineup a rest, although Raphael Varane does keep his place as he continues his comeback from injury. Axel Disasi comes in for his first start while Kingsley Coman and Randal Kolo Muani are joined up front by Mateo Guendouzi.

1 hr from kickoff: France have just named their team, and it’s a new-look starting lineup for the holders with most of the big guns rested.

1 hr 10 mins from kickoff: France, meanwhile, have just arrived at the Education City Stadium, so their team news won’t be long either.

1hr 15 mins from kickoff: Tunisia have named their team already!

1 hr 30 mins from kickoff: Can Tunisia get off the mark against Les Bleus?

Tunisia scored 13 goals in total in all their #FIFAWorldCup games 🏆

2 hrs from kickoff: A little hint on France’s starting XI?

3 hrs 30 mins from kickoff: All relaxed in the France camp with their last 16 spot already secured

4 hrs from kickoff: Can France reach seventh heaven against Tunisia?

France are the first team since Spain in 2010 to win 6⃣ World Cup games in a row 🔥 pic.twitter.com/UPqEFIf98P

4 hrs and 30 mins from kickoff: Kylian Mbappe has been SENSATIONAL for France so far in Qatar — but will he add to his goal tally today?

5 hrs from kickoff: Hello, and welcome to The Sporting News’ live coverage of Tunisia vs. France. Will Kylian Mbappe continue his fine form in front of goal? Is he even going to start the match or will he be rested? Can Tunisia score their first goal of the tournament? We’ll soon be finding out the answers to all these questions. Let’s get going!

Tunisia midfielder Ellyes Skhiri is likely to play in a protective face mask again as he continues his recovery from a cheekbone fracture.

Jalel Kadri opted to use leftback Ali Maaloul while Wahbi Khazri, who plays his club football in France for Montpellier, came in up front for his first start of the tournament. Kadri added there are “no miracles” in football, while urging his players to produce their best performance of the group stage.

France were ravaged by injuries in the build-up to the tournament and coach Didier Deschamps acted to reduce the risk of being deprived of any more players. Les Bleus are set to be confirmed as group winners, unless they lose and Australia win, while overturning a six-goal inferiority in goal difference.

The likes of Raphael Varane and Jules Kounde played against Denmark, but have only just returned from injuries, Varane keeping his place for this one, while key players including Mbappe were saved for a potential Round-of-16 clash with Argentina.

The match will start at 6 p.m. local time and take place at the Education City Stadium in Al Rayyan, which opened in November 2021, has a capacity of 80,000 and will also host the final of the tournament.

Watch the match on fuboTV in USA

USA vs Colombia live stream, TV channel, lineups, and rosters for USMNT friendly
Can you name every NBA player to score 50 points in a game during 2022-23 season?
Maximalist Fashion Is TikTok’s New Trend Obsession – Here’s How to Shop the Aesthetic
What to Watch: The Watchful Eye; Pamela, A Love Story; The Ark
Doja Cat Accessorizes Her Look With 6-Inch Platforms and a Cluster of Grapes