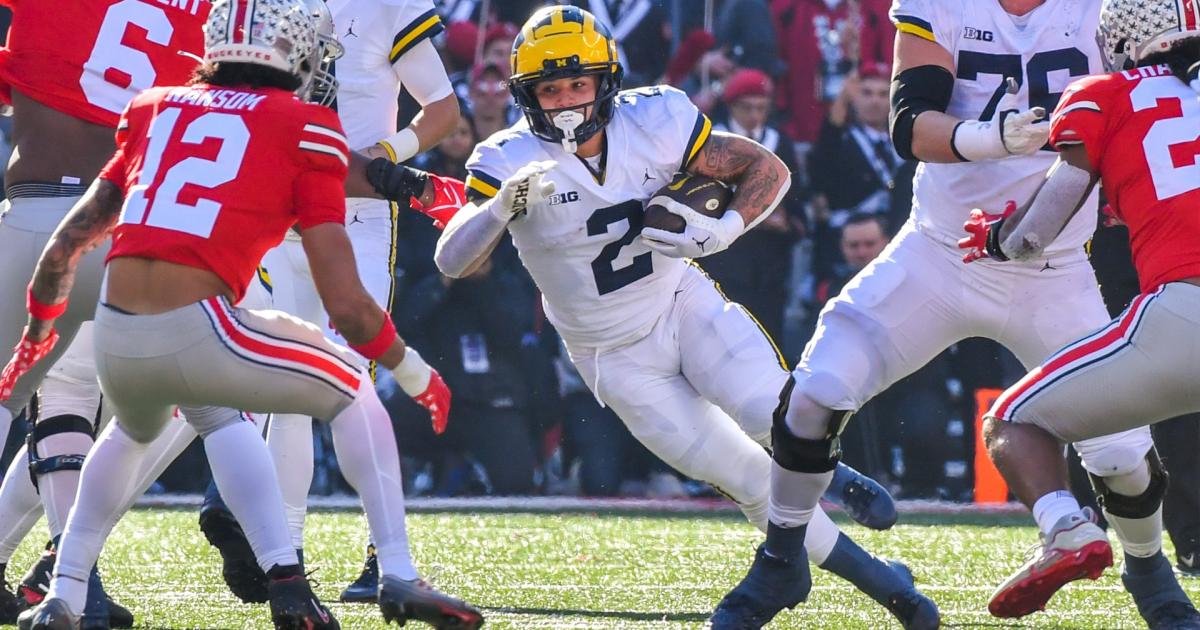 Running back Blake Corum will undergo knee surgery and miss the remainder of the 2022 college football season, according to NFL Network’s Ian Rapoport. Corum, a junior running back, had 1,463 rushing yards and 18 TDs for the Wolverines before suffering a knee injury in the first half against Illinois on Nov. 19. Corum had two carries against Ohio State last week before exiting the game.

Sources: #Michigan star RB Blake Corum is expected to have knee surgery and is out for the season. The Heisman candidate should make a full recovery. He tried to play last week vs. Ohio State but his knee made it impossible.

It’s a blow for No. 2 Michigan (12-0), which is playing for its second straight Big Ten championship against Purdue at Lucas Oil Stadium on Saturday. Corum was a Heisman Trophy candidate, team leader and focal point of the offense.

It’s not the end-all to Michigan’s CFP and national title hopes under coach Jim Harbaugh, however. Michigan showed in the 45-23 victory against No. 5 Ohio State that the big-play offense is possible without Corum, and a few key players will have to step up in Corum’s absence.

If these things happen, then the Wolverines will have a chance.

Michigan had 11 rushing attempts for 10 yards at halftime of the Ohio State game. Donovan Edwards, who had been dealing with a hand injury that kept him out of the Illinois game, had a moment to reflect at halftime.

Edwards scored on runs of 75 yards and 85 yards in the fourth quarter, and that big-play potential has been a sophomore running back.

MORE: Betting trends to know ahead of Michigan-Purdue

The good news for Michigan? Edwards has three games with at least 15 carries this season, and those came against Penn State, Rutgers and Ohio State. Edwards averaged 166 rushing yards on 9.3 yards per carry in those games. This is his chance to carry the workload and a preview for 2023. He’s still running behind a dominant offensive line.

The bad news for the Wolverines? It can’t just be big plays. Take away those two lightning strikes, and Michigan averaged 3.5 yards per carry on the other 39 rushing attempts against the Buckeyes. Quarterback J.J. McCarthy will need to be more involved as a runner, and C.J. Stokes, a freshman who has shown flashes but has 13 carries for 41 yards the last two weeks, needs to be more effective.

Edwards is a different style back than Corum, but he has flashed enough home-run potential that the drop-off might not be as significant as it looks.

Give credit where it’s due. McCarthy connected on the big-time throws against the Buckeyes, and he finished with 263 yards and three TDs. McCarthy, however, completed just 50% of his passes. In November, McCarthy completed 51.5% of his passes in four games. That was a stark contrast to the first five Big Ten games, when McCarthy hit 71.1% of his passes.

It cannot be an all-or-nothing-passing game moving forward. McCarthy has to find that efficient touch that allowed him to take the starting job from Cade McNamara early in the season.

The Purdue matchup will be an interesting case to see which direction McCarthy is trending. It’s an indoor game where weather won’t be a factor, and the Boilermakers will try to turn this game into a shootout.

In the Ohio State victory, the huge pass plays set up the running game in the second half. Don’t be surprised if this becomes a trend for the Wolverines in their postseason run. McCarthy had 17 TDs and two interceptions this season. Harbaugh can trust his quarterback – and he’ll need to if the Wolverines want to break a national championship drought that extends back to 1997.

Michigan embraces next man up

Corum isn’t the first significant player Michigan has lost this season. Tight end Erick All suffered a back injury early in the season and also underwent surgery. All was considered one of the best tight ends in the country, but Luke Schoonover and Colston Loveland – who caught a 45-yard touchdown against the Buckeyes – have stepped up in All’s place.

Edwards, Stokes and Issiah Gash will have the same opportunities in the running game. Corum is a huge loss, but it’s not the kind of injury that’s going to impact the CFP’s committee thinking much in the final week. After all, Michigan beat Ohio State – the toughest opponent on its schedule – without Corum.

The Wolverines are heavy favorites this week against Purdue and likely would be favored in a potential matchup against No. 3 TCU. Win those games, and the road-block could be No. 1 Georgia – which beat the Wolverines 34-11 in last year’s CFP semifinal.

Michigan had 27 carries for 91 yards in that loss. Corum had three carries for 13 yards. Edwards had four carries for 16 yards. The Bulldogs would be a tough test no matter what, and if the Wolverines get there, it means Edwards will have done the job to that point.

It’s going to be tough to overcome Corum’s injury, and it might turn out to be something Michigan fans lament in the future. In the present tense, however, the Wolverines’ national championship outlook was going to be tough no matter what. There are no excuses at this point.

If McCarthy and Edwards step up like they did against the Buckeyes, then, yes, Michigan will still have a good shot.

Even better news? No matter what happens, they will have another shot with this group in 2023.