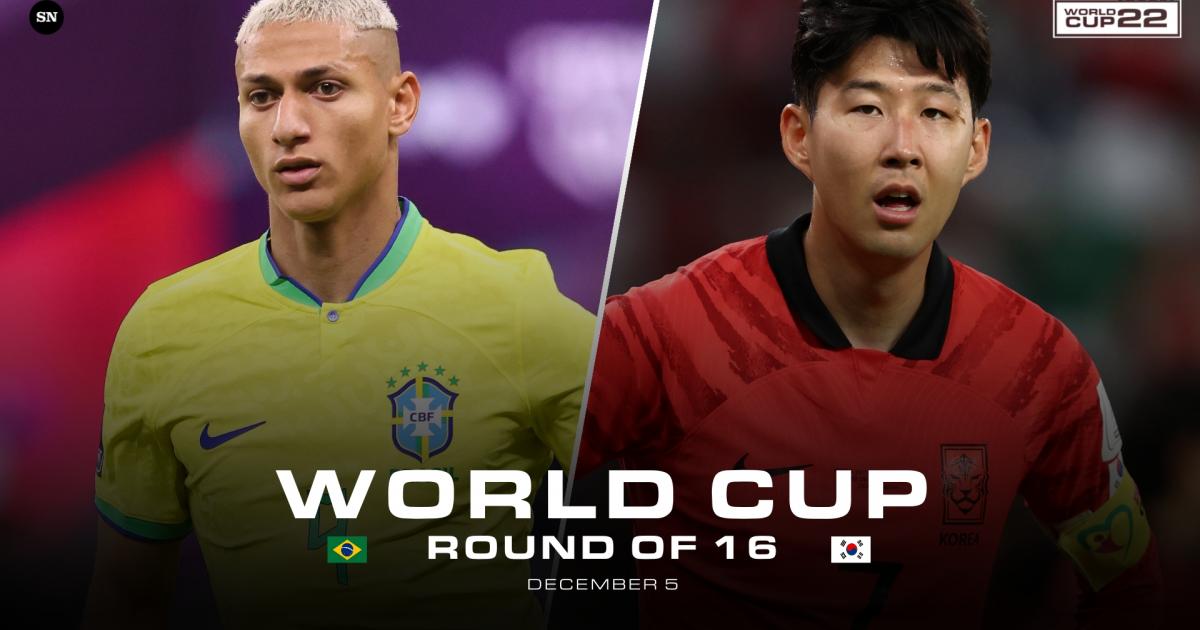 The favorites to win the 2022 FIFA World Cup begin their journey through the knockouts with a Round of 16 match, as talented Brazil battle against high-energy South Korea with a quarterfinal berth on the line for the winner.

The Koreans will feel relieved to have reached this stage after a stoppage-time goal by Wolves forward Hwang Hee-chan gave them the surprise victory against Portugal to advance from Group H ahead of Uruguay.

Brazil experienced a shock of their own the final day of group games, dropping a 1-0 result to Cameroon. It turns out that the Selecao still claimed first place on goal difference to set up the matchup against South Korea.

These two teams faced off in a friendly in Seoul back in June, with Brazil running out comfortable 5-1 winners. A World Cup knockout match should follow a different script, but the return of Neymar from an ankle injury suffered in their opening game will have Brazil supporters dreaming of another lopsided win.

The Sporting News is tracking live scoring updates and highlights for Brazil vs. South Korea at the 2022 World Cup. Follow below for complete results from the Round of 16 match in Qatar.

3 hrs 53 from kickoff: Brazil are facing a difficult injury situation that goes beyond just Neymar. Danilo is also dealing with an ankle injury that’s similar to Neymar’s, and the team took a dip in midfield without him against Switzerland, where Fred was deployed.

Additionally, Gabriel Jesus and Alex Telles have been ruled out for the rest of the tournament with their own issues, and while both are backups as the squad stands, it still affects their depth moving forward.

4 hrs 15 from kickoff: These two sides know that a quarterfinal meeting with either Japan or Croatia awaits, and those two are getting underway in their Round of 16 clash right now. We’d love you to stay with us for the buildup, but if you want to have two tabs on the go you can check out our live blog of that game here!

It’s a big day for Asian nations, who will surely be supporting each other as they look to continue a World Cup tournament that’s already the best the continent has ever seen, with more teams in the knockout stage (3) than any previous tournament.

South Korea’s win over Portugal means three sides from Asia are in the World Cup round of 16. Asian sides also got their most points per team since the World Cup was expanded to 32 teams. https://t.co/8oM98b6mWi

4 hrs 45 mins from kickoff: Tottenham Hotspur will win either way on Monday. One of their stars is moving on no matter what:

World Cup Round of 16. Brazil vs South Korea. Richy vs Sonny. 🇧🇷🇰🇷 pic.twitter.com/JJ4G2J7FDN

5 hrs from kickoff: This whole deal about Neymar being ready to play against South Korea is real. Here he is on the practice field before the match. “If everything goes well [in training] he will play says the coach:

Neymar is getting ready for Brazil’s matchup against South Korea 💪 pic.twitter.com/GPKnAzs0fi

Brazil fans will be excited about the news that Neymar and Danilo are back in the picture after picking up knocks in the opener. But that will be offset slightly by the absence of forward Gabriel Jesus and left-back Alex Telles, who won’t be available due to knee injuries. Brazil will also be without Alex Sandro, who’s dealing with a hip issue, according to Brazilian media.

With both natural left-backs sitting out — Alex Sandro and Alex Telles — it’s expected that coach Tite plays right-back Danilo in the left-back spot.

South Korea’s coach, Paulo Bento, will have a choice to make on the right wing, with the return of World Cup hero Hwang Hee-chan, whose stoppage-time heroics are the reason the Koreans are even here. He may be given the start with other teammates filling in throughout the group matches.

Napoli defender Kim Min-jae sat out the last match due to injury, but the speculation is that he could return for this big match, which could see the Koreans return to the quarterfinals for the first time since 2002.

This Round of 16 clash will be played at Stadium 974. Here’s how you can watch all the action in some of the major global territories.