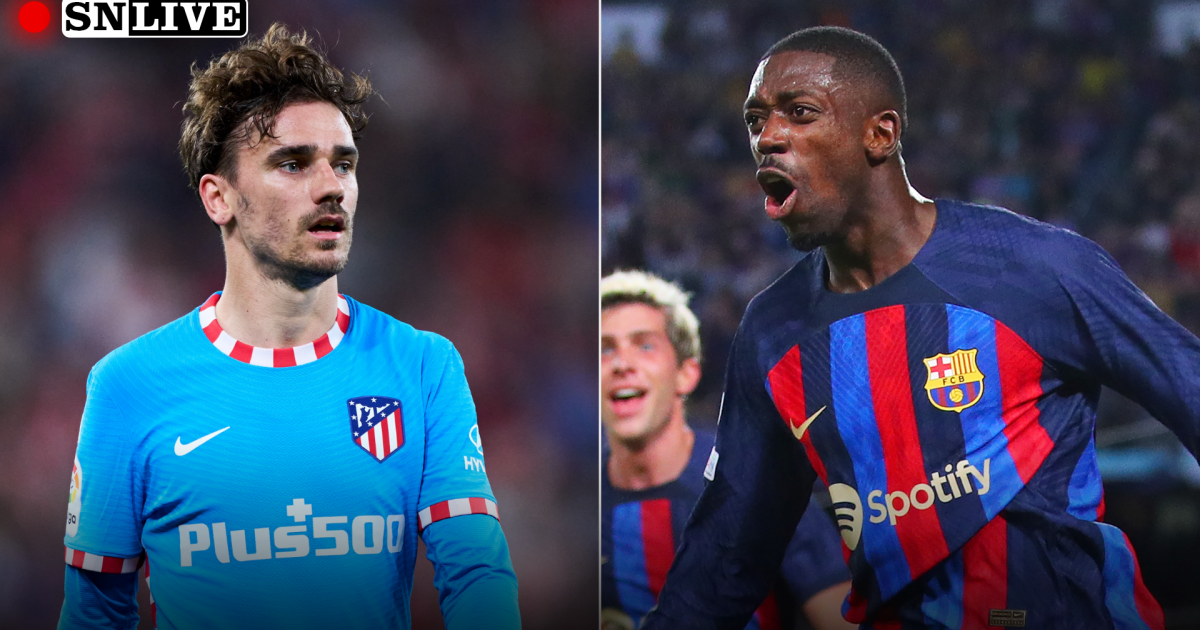 Barcelona have a fantastic chance to build a gap atop the Spanish top flight as they visit Atletico Madrid in a Sunday La Liga showdown.

The Blaugrana suddenly find themselves with a glorious opportunity after Real Madrid, level on points for the moment, fell to Villarreal just a day before. That affords Xavi and company a chance to build a lead should they secure any result on the road at the Wanda Metropolitano.

It won’t be easy, however, as they’ll have to do so without star striker Robert Lewandowski who begins a three-match suspension today for gestures made towards an official before the World Cup break.

Additionally, Barcelona come up against a suddenly in-form Atletico Madrid side that has won all four of its last matches, although three of those have come in Copa del Rey play. The hosts feature a number of players who are coming off great World Cup showings, including Antoine Griezmann who led his France side to the final. Striker Alvaro Morata is also fresh off a quality performance in Qatar despite Spain’s early exit.

Atletico Madrid vs Barcelona: First half

24th min: Chance, Barcelona! Oh it’s an AWFUL mistake from Nahuel Molina, whose back-pass is horrifically behind Stefan Savic, gifting Gavi a free chance on goal, but it’s blocked by Koke who recovers in time. YIKES on that one, not exactly a highlight moment.

21st min: GOAL! BARCELONA! In a choppy match, a few seconds of fluidity pays off for Barcelona and they take the lead. Pedri squeezes by a trio of defenders with a high-quality dribble, and gets it across to Gavi with his back to goal. He then picks out Ousmane Dembele free at the far post, and it’s a calm, collected finish past Jan Oblak for the lead.

VAR is checking for a possible foul on Gavi in the buildup, but there’s nothing in that, as he’s simply backing down his defender.

Watch in the UK:

18th min: Atletico Madrid very nearly open Barcelona up on the counter, with Marcos Llorente getting onto a ball down the right. He squares it for Joao Felix streaking into the top of the penalty area, but it’s behind the striker and gets ushered out by Andreas Christensen for a corner. The set-piece chance is messy but ultimately cleared by Barcelona.

17th min: Aside from the one blocked shot by Fati, there has been very little action in this match so far. Barcelona have held the majority of the possession, but Atletico Madrid are quite organized and contesting hard in midfield. Neither team has really even broken into the opposition’s danger zone 25 yards from goal.

10th min: Chance, Barcelona! The first move forward for Barcelona produces a big opportunity for Ansu Fati, who’s slid through by a great through ball from Gavi, but his shot is blocked by a sliding Jose Gimenez who came in from no-man’s land to stop the effort.

6th min: Atletico Madrid do indeed force a turnover in the Barcelona half, and it produces the first shot of the match as young Pedro Barrios turns and fires, but it’s right at Marc-Andre ter Stegen. That won’t beat La Liga’s most in-form goalkeeper. Still, warning signs for Barcelona who won’t want to lose the ball that deep in their own half.

5th min: Slow, choppy start to the match with a lot of down time. Barcelona looking to knock the ball around a bunch, evading the high Atletico Madrid press for the most part. Hosts are still pushing for turnovers in advanced positions.

Kickoff: The game is under way! There’s lots on the line here today, especially for the league leaders who will want to secure points and pull away from rivals Real Madrid.

8 mins to kickoff: The match is drawing closer! There’s plenty at stake for both sides. Barcelona can open up a gap on Real Madrid at the top of the table after Los Blancos fell to Villarreal yesterday. Atletico Madrid can pull back into the top four after dropping behind Real Betis following yesterday’s results.

23 mins to kickoff: Barcelona boss Xavi has rotated defenders this season due to form and injury, but it hasn’t really mattered. They’ve been great through league play this year, conceding just six goals all campaign in La Liga competition.

🤩Barcelona have conceded just 6 goals all season so far…

👀 To put that in perspective, champions Real Madrid have conceded 16…

33 mins to kickoff: Barcelona have historically dominated Atletico Madrid, but of late, the hosts have turned things around a bit, winning two of the last four meetings.

2 – Barcelona have lost two of their last four games against Atlético Madrid in LaLiga (W1 D1), having gone unbeaten in their previous 20 games against the Rojiblancos in the competition (W14 D6). Change. pic.twitter.com/lznZqSGdzy

48 mins to kickoff: Barcelona will be in their gold kits today, which are a sharp look.

65 mins to kickoff: The Atletico Madrid lineup is in as well, and there’s a formation change on their end as well. Diego Simeone has also moved to a 4-4-2, from his usual three-CB system. Axel Witsel is dropped, while Koke is preferred in midfield. Joao Felix and Antoine Griezmann start in the attack, with Alvaro Morata sat despite his good World Cup form.

1 – At 19 years and 207 days, Pablo Barrios is the youngest Atlético de Madrid player to start a game against Barcelona in LaLiga under Diego Simeone. Freshness. pic.twitter.com/YW6Y8G8d8f

75 mins to kickoff: The Barcelona lineup is already out, and it’s a surprising one, as Xavi has gone with four midfielders in a lineup shift, moving to a 4-4-2 from the usual 4-3-3. Both Sergio Busquets and Frenkie de Jong are in the lineup, alongside youngsters Pedri and Gavi.

Up front, neither Memphis Depay or Ferran Torres start in place of the suspended Robert Lewandowski. Instead, it’s wingers Ansu Fati and Ousmane Dembele, both natural wingers, who deputise as the strike partnership.

87 mins to kickoff: The Atletico Madrid bus has arrived at the Wanda Metropolitano, with this match under two hours until kickoff.

Diego Simeone has a number of players to choose from in midfield, one of the more fascinating lineup situations on either side of this match. He could move Axel Witsel into midfield or leave him at centre-back, which will influence the rest of the moves. It will be interesting to see if Thomas Lemar can break the side, having barely played this season.

95 mins to kickoff: The Blaugrana are struggling for defenders at the moment thanks to a few injuries. They’re reportedly in discussions with the representatives of Benjamin Pavard, who wants out of Bayern Munich and is out of contract this summer. It’s unlikely a move would be secured this winter, but he could be someone to arrive this summer.

You can see all the Barcelona transfer rumors this winter here.

Barcelona are now showing concrete interest in Benjamin Pavard for summer transfer window. He’s considered one of the potential targets, depending on the conditions. 🔵🔴 #FCB

120 mins to kickoff: Barcelona will be without two starters due to suspension in this match, most notably Robert Lewandowski, who serves a three-match suspension. Meanwhile, Jordi Alba was sent off last time out, triggering a one-match ban.

There are capable replacements for both. Ferran Torres has largely been a disappointment this season, so Xavi could look to Memphis Depay up front, after the Dutchman played well in Qatar once returning from injury. Meanwhile, Alex Balde is young but has done well in his few minutes playing behind Alba.

The biggest question for Diego Simeone was how to deploy his three attackers in Antoine Griezmann, Alvaro Morata, and Joao Felix. Rumors continue to swirl about Felix’s future at Atleti, but that doesn’t affect his standing within the squad, starting alongside Griezmann with Morata on the bench.

There’s a formational change as Simeone moves to a 4-4-2, dropping Axel Witsel while Koke and Reinildo enter the mix.

Mario Hermoso is suspended after being sent off in their last La Liga match.

With Xavi having rotated his squad heavily for the midweek Copa del Rey match, it’s tough to know who will remain and who will drop to the bench this weekend. Sergio Busquets was the biggest question mark, as the 34-year-old will want to avoid overuse, but he starts, interestingly alongside Frenkie de Jong in a new look 4-4-2 formation.

One player who won’t be involved is Robert Lewandowski who is in the midst of a three-match suspension after being sent off in a match before the World Cup break. His ban was put off briefly for appeal, allowing him to take part in the draw with Espanyol last weekend, but it was upheld in court, so he is out of action for three games.

It was thought either Memphis Depay or Ferran Torres ccould take that spot up front, with the former having started midweek against Intercity FC, but Xavi surprised many by pairing natural wingers Ousmane Dembele and Ansu Fati up front. Jordi Alba is also suspended, meaning Alex Balde is deployed at full-back.

MORE: All the latest Barcelona transfer news for the 2023 January window

How to watch Atletico Madrid vs Barcelona

Here’s how to watch all of the action from this match in some of the major territories:

UK: La Liga matches in the UK are carried on LaLiga TV and ITV, with ITV’s streaming platform ITVX available for online viewing.

USA: All La Liga matches in the United States are shown on ESPN’s premium streaming service ESPN+, requiring a subscription to view.

Canada: All La Liga matches in Canada are available via TSN’s streaming options.

Barcelona are favored in this match, but they still sport plus odds as bookmakers give Atletico Madrid a fighting chance thanks to their recent good form.

Part of that will be down to the individual players available for selection. Robert Lewandowski’s absence certainly plays a factor, while Atletico sport Antoine Griezmann, one of the best players at the 2022 World Cup and in great form.