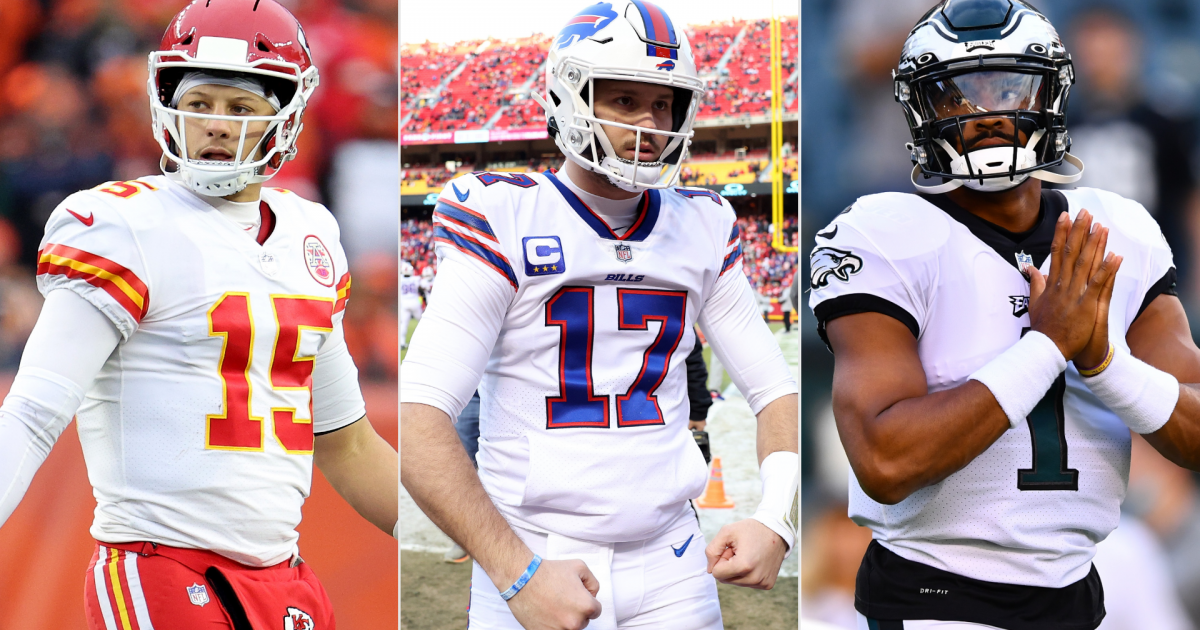 After the conclusion of a roller-coaster first week of the New Year — and an action-packed Week 18 full of playoff implications — the 2022 NFL regular season has come to a close. The 2023 NFL playoffs and the countdown to Super Bowl 57 are upon us.

The setting of the playoff field has solidified the odds for each of the 14 postseason teams to hoist the Vince Lombardi Trophy.

Much like last year, the conference title races appear wide open. Just a month ago, the Bills, Chiefs and Eagles seemed like runaway favorites, but a lot has happened since then. And as we learned last year — with the 12-5 Rams prevailing over the 10-7 Bengals in Super Bowl 56 — anything can happen in January and February.

One constant of the modern era of football remains: oddsmakers lean heavily toward teams with elite quarterbacks, stud pass-catching playmakers, and timely health. Depth and defense matter, too, as does coaching — but nothing moves the needle like the passing game.

Here’s an in-depth look at teams’ odds to win Super Bowl 57 as the 2023 NFL postseason gets underway.

The Chiefs enter the postseason as favorites to win Super Bowl 57, which should come as no surprise. Patrick Mahomes seems like a lock to win the second MVP award of his already-illustrious career, after leading Kansas City to an AFC-best 14-3 record in his first season without All-Pro wideout Tyreek Hill. Travis Kelce has enjoyed one of the best seasons of his career, while the 1-2 backfield punch of rookie Isiah Pacheco and Jerick McKinnon has impressed.

Sitting right behind the Chiefs are Josh Allen and the Bills (13-3), who have not lost a game since Nov. 13. But they have certainly lost a lot physically, mentally and emotionally. The whole world knows about Buffalo safety Damar Hamlin’s horrifying, nearly-fatal cardiac incident in Week 17. Thankfully, Hamlin is on the road to recovery, but obviously he will not play this postseason. That is a big blow to a defense that has already battled injuries to key players this season, including Von Miller (ACL), Micah Hyde (neck) and Jordan Poyer (knee).

While not comparable to what the Bills have endured, the NFC-leading Eagles (14-3) know a little something about perseverance. Philly quarterback and MVP candidate Jalen Hurts (shoulder) returned from a multi-game absence in Week 18, doing just enough to help the Eagles beat the Giants and earn a much-needed first-round bye.

With the Lions beating the Packers and helping the Seahawks (9-8) sneak in as the last NFC seed, Geno Smith joins five other quarterbacks who will be making their first career postseason start on Wild Card weekend (Purdy, the Dolphins’ Tua Tagovailoa or Skylar Thompson, the Chargers’ Justin Herbert, the Jaguars’ Trevor Lawrence, and the Giants’ Daniel Jones are the others). Seven teams — exactly half the postseason field — did not participate in the playoffs last year.

Below is a full look at the odds for Super Bowl 57, via BetMGM.

Many would list the Chiefs here — which would, by no means, be a poor pick — but this has felt like Buffalo’s year since before the season kicked off (it was my preseason pick, and I’m not just sticking with it out of sheer stubbornness). Sure, there have been some interceptions — and some drops — but this team not only has the most weapons, it also has the most captivating storyline going into the postseason. If the thought of the Bills winning it all for Damar Hamlin doesn’t make you feel a little twinge of something inside you, then you might be a real-life Grinch.

But it’s not just Buffalo’s abundance of talent or inspiring story that makes Sean McDermott’s squad the best bet. The Bills also have tremendous coaching, health at the core skill positions, and their easiest road to the championship in recent history. For starters, they will face the 9-8 Dolphins, who are limping into the postseason with Tua Tagovailoa still recovering from either his second or third concussion of the season. And there’s also the elephant in the room: the highly-likely neutral-field AFC championship between Buffalo and Kansas City — which would be away from Arrowhead Stadium because the Bills played one fewer game than the Chiefs, with the Hamlin emergency in Week 17 causing Bills-Bengals to be canceled.

While Buffalo beat Kansas City at Arrowhead earlier this season, there is no doubt that Allen would be relieved to play elsewhere for the AFC crown. The Bills have lost in Kansas City in each of the past two postseasons, not because Allen has been bad but because Mahomes has been so good in front of his home crowd. Allen completed 27-of-37 passes for 329 yards and four touchdowns in the divisional round last January — but Mahomes completed 33-of-44 for 378 yards and three TDs as KC prevailed 42-36.

The old adage remains: “To be the best, you’ve got to beat the best.” Mahomes has been the most dominating QB in the game for half a decade, but Allen is showing plenty of signs that he’s next in line. And with old friends Cole Beasley (slot extraordinaire) and John Brown (downfield ‘Blur’) rejoining the team just in time — adding to a receiving corps already blessed with stud pass-catchers Stefon Diggs, Gabe Davis, and tight end Dawson Knox — this is a tough +400 to stay away from. If it feels like destiny, it might be destiny.

For a team with just one more loss than the Chiefs — and riding an eight-game winning streak — the Bengals sure seem like they’re getting the short end of oddsmakers’ proverbial sticks. Cincinnati has all the components needed to return to the Super Bowl: a Pro Bowl QB in Joe Burrow, elite receivers in Ja’Marr Chase (2 for 2 in Pro Bowls) and Tee Higgins (the best WR2 in the NFL), an improving offensive line, and a surprisingly-stifling defense.

Cincy ranked in the top seven in scoring offense and scoring defense this season, and Burrow took a clear step forward as one of the best pocket passers in the league. We saw in the Bengals’ 2021 Super Bowl run how cool and composed Joey Brr is under pressure. Like the Chiefs and Bills, Cincinnati only lost one game at home all season — but as we learned in its AFC championship victory over Mahomes and the Chiefs last January, greatness travels.

We wanted to pick the Chargers (+2500), but their lack of experience and poor health from top to bottom worry us. Thus, we’re cheaping out a bit and picking the Cowboys despite their status as a moderate underdog. Hey, they have just the sixth-best odds in a field of 14 — there’s plenty of value here, and plenty of disrespect being put on Jerry Jones’ squad by sportsbooks.

With the help of likely Defensive Player of the Year Micah Parsons, coordinator Dan Quinn has had this defense operating at an elite level all season (No. 6 in scoring defense, No. 4 in sacks, No. 1 in turnovers). But ever since Dak Prescott returned from his hand injury, Dallas has also looked like a Super Bowl-level offense. Tony Pollard broke out in a major way, moving from quality complement to Ezekiel Elliott to bona fide Pro Bowler. Dalton Schultz returned from his own injury and stepped it up big time. CeeDee Lamb started to look great again. Zeke continued to eat in the red zone. Everything clicked for Mike McCarthy’s squad.

The naysayers will point to the Cowboys’ recent history of choking under pressure in the playoffs, as well as their unfortunate seeding at No. 5. Dallas shouldn’t worry much about lucky GOAT Tom Brady and the Buccaneers, who nabbed the four-seed despite finishing with a losing record. These teams are in drastically different situations than they were in opening week when Tampa Bay blew the doors off Jerry World. The apprehension about the five-seed stems from the second-round date with Jalen Hurts and the division-rival Eagles.

The Cowboys beat Philly 40-34 in Week 16, but of course that was with Gardner Minshew under center for the Birds. A triumph in a divisional-round tilt with Hurts — who’s coming off a shoulder injury — would go a long way to proving Prescott’s merit as an elite QB, and also prepare the ‘Boys well for an NFC title game against the 49ers (sorry, Vikings, we don’t believe in you). This is the best Dallas team we have seen since the 90s, which makes it a great value bet to go the distance. Just don’t go making any Mattress Mack-level bets, now — we said “value,” not “lock”!

Look, we understand the temptation to back the GOAT at potentially-lucrative odds to win his eighth Super Bowl and ride into the sunset on a veggie-powered luxury vehicle. But this just hasn’t been Brady’s year. Everything has unraveled, from his marriage to his crypto connections and of course, his on-field play.

Brady’s touchdown percentage (3.4) this regular season was the lowest of his career as a starter, as was his average yards per completion (9.7). He has looked uncomfortable in the pocket, slow to make downfield reads, and inaccurate with even medium-length passing attempts. And “Playoff Lenny” Fournette might not save TB12 this time around, as both the veteran and rookie Rachaad White have failed to exceed 3.7 yards per carry this season.

Much of the Bucs’ issues are related to the offensive line, we’ll give Brady apologists that. And Tampa’s defense has not been as dominant as it was a few years ago when Brady won his seventh ring. But Brady teams also never used to turn the ball over nine times between Weeks 13 and 15, or surrender 34-plus points in back-to-back weeks near the end of the season (at San Francisco, vs. Cincinnati).