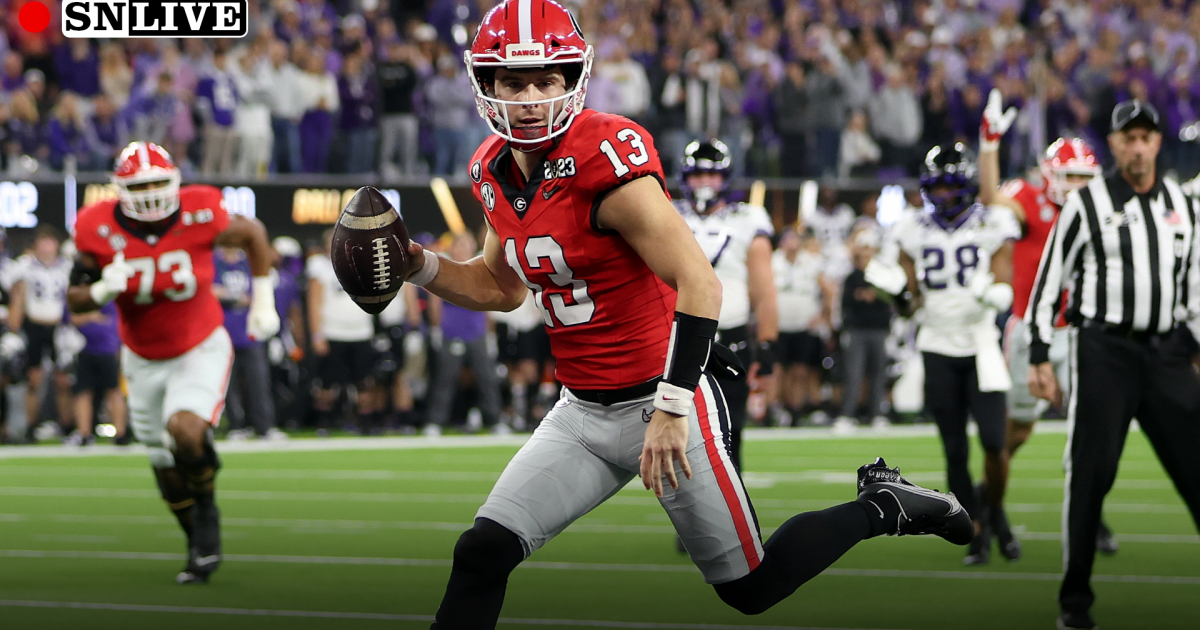 The College Football Playoff will end with a classic David vs. Goliath matchup.

Reigning national champion Georgia, which hasn’t lost since December 2021, enters the championship game as a heavy favorite against a TCU team no one expected to be here. The Horned Frogs went 5-7 last season and entered the year unranked, but first-year coach Sonny Dykes has rejuvenated the program and has TCU on the doorstep of a championship.

Both Georgia and TCU had to fight tooth and nail in the semifinals to get to this stage. The Bulldogs overcame a late deficit against Ohio State and barely held on as the Buckeyes missed what would’ve been a game-winning field goal in the final seconds. The Horned Frogs won an absolute thriller over Michigan, taking punch after punch from the Wolverines and refusing to bow out.

Beating Georgia is no longer just about overcoming a tough defense. The Bulldogs’ defense hasn’t been as dominant as it was last season, so there should be an opening for TCU to score some points. Instead, beating Georgia also now requires limiting a potent offense. Ohio State had a tough time slowing down the Bulldogs’ many weapons in the Peach Bowl, and the Horned Frogs’ defense wasn’t exactly at its best against Michigan.

For Georgia, the key might be avoiding turnovers. Michigan would likely be here in TCU’s place if not for two pick-sixes and a fumble against the Horned Frogs. If the Bulldogs don’t give TCU any additional opportunities, there’s a great chance the talent advantage is enough to make Georgia back-to-back national champions.

Does the SEC reign supreme for the fourth time in five years, or does TCU have one more stunner in its arsenal?

The Sporting News is tracking live scoring updates and highlights as Georgia and TCU face off in the 2023 College Football Playoff Championship Game. Follow along for all of the key moments.

8:39 p.m. TOUCHDOWN — Nobody touched Bennett on his way into the end zone. That’s his second rushing touchdown of the night, and Georgia is just gashing TCU right now. The Bulldogs went 92 yards in six minutes.

STETSON BENNETT WILL NOT BE DENIED pic.twitter.com/dDatjx8wnt

8:37 p.m. — It continues to be one step forward and two steps back for TCU’s defense, which stopped McIntosh for a loss and then promptly allowed another first down. The Bulldogs are in the red zone and moving fast.

8:36 p.m. — TCU pressures Bennett immediately, but naturally he takes off and runs for a first down. Georgia is threatening for more points.

8:34 p.m. — TCU’s defense is a mess right now. This time, Bowers gets open and makes a big-time catch downfield. The Bulldogs are moving after starting at their own eight-yard line.

8:31 p.m. — Derius Davis goes into Georgia territory but doesn’t get nearly enough for the first down. TCU will punt and try to play the field position game here.

8:27 p.m. — So much for that, as Duggan can’t find any options downfield and gets sacked on first down. Eight-yard loss.

8:26 p.m. — TCU is looking much more comfortable now, both running and passing the ball. The Horned Frogs are approaching midfield.

8:22 p.m. TOUCHDOWN — Woah, McConkey couldn’t have been more wide open on that play. 37-yard score. Bennett mails it to the only man in the end zone to put Georgia back up by two scores.

HOW DID LADD MCCONKEY GET SO WIDE OPEN??? pic.twitter.com/OlkgqjTZnz

8:21 p.m. — Quick plays by McConkey and Kenny McIntosh already have Georgia just over midfield. The Bulldogs’ offense is getting anything it wants on the ground right now.

8:15 p.m. TOUCHDOWN — Alright, so we have a game. Duggan runs it in himself for the touchdown to cut Georgia’s lead to three. Can the Horned Frogs defense build on the momentum?

MAX DUGGAN AND TCU WITH THE RESPONSE 🐸#NationalChampionship pic.twitter.com/3iX41dH69f

8:10 p.m. — Big play alert! Duggan hits Derius Davis for a 60-yard gain as TCU’s offense has its breakthrough. That was a huge bust by the Georgia defense. The pass was badly underthrown, but Davis was able to wait all day and haul it in.

DERIUS DAVIS WITH THE SPARK 🧨

Is this what the Frogs needed? 🐸 pic.twitter.com/0uchjqm41s

8:05 p.m. FIELD GOAL — Credit to TCU’s defense, which rises up and forces an easy field goal for Jack Podlesny. Bulldogs up by double-digits early.

8:03 p.m. — Georgia is down to the 10-yard line with the help of a great catch by Ladd McConkey, who went up to grab a pass from Bennett.

8:01 p.m. FUMBLE — Oh man. Derius Davis fumbles and it’s recovered by Georgia. TCU looks totally overmatched to this point, and Georgia is in position to go up by two scores.

8:00 p.m. — TCU was set to punt after an incompletion on 3rd & Long, but Quentin Johnston is pulled down by a Georgia defender. Automatic first down for the Horned Frogs. They’ll take what they can get.

7:59 p.m. — Duggan gets taken down for a six-yard loss on the opening play of TCU’s drive. The Horned Frogs have -3 yards so far.

7:53 p.m. — Kendall Milton takes Georgia down to the edge of the red zone with a nice run.

7:51 p.m. — Brock Bowers with a big catch up the middle to take the Bulldogs into TCU territory.

7:50 p.m. — And now Georgia opens its drive with a false start. Both sides a little anxious to start.

7:49 p.m. — Georgia forces a punt on a low throw by Duggan. Here comes Stetson Bennet and the Bulldogs offense with great field position.

7:43 p.m. — Georgia wins the toss and defers. The Horned Frogs will start with the ball.

7:42 p.m. — We are just about ready for kickoff! The captains are coming together for the coin toss. Matthew Stafford and LaDainian Tomlinson are on hand at midfield.

7:32 p.m. — For what it’s worth, actual kickoff is reportedly scheduled for roughly 7:45 p.m. ET. Plenty of fanfare and ceremony, as usual.

7:24 p.m. — Lee Corso threw down the bulldog head and put on the TCU cap. He’s rolling with the Horned Frogs, after noting he got both semifinal picks wrong.

7:14 p.m. — We’re about 30 minutes away from kickoff, and the injury news is positive for Georgia. TE Darnell Washington and OT Warren McClendon are both set to play tonight. TCU RB Kendre Miller’s status isn’t yet confirmed.

1:30 p.m. — Get fired up before kickoff with the hype video of your choice:

We will not be hunted at the University of Georgia.#GoDawgs | @kroger pic.twitter.com/t5E2CgXwJ6

What channel is Georgia vs. TCU on today?

Georgia vs. TCU will be broadcast nationally on ESPN. Chris Fowler (play-by-play) and Kirk Herbstreit (color analyst) will be on the call from SoFi Stadium, while Holly Rowe and Molly McGrath will report from the sidelines.

ESPN is also rolling out its Megacast for the College Football Playoff, once again providing alternate broadcasts across its family of networks.

The College Football Playoff Championship Game will be available to stream live on all of ESPN’s digital platforms, including ESPN.com and the ESPN App.

Cord-cutters have several live streaming options, including fuboTV, which offers a free trial: