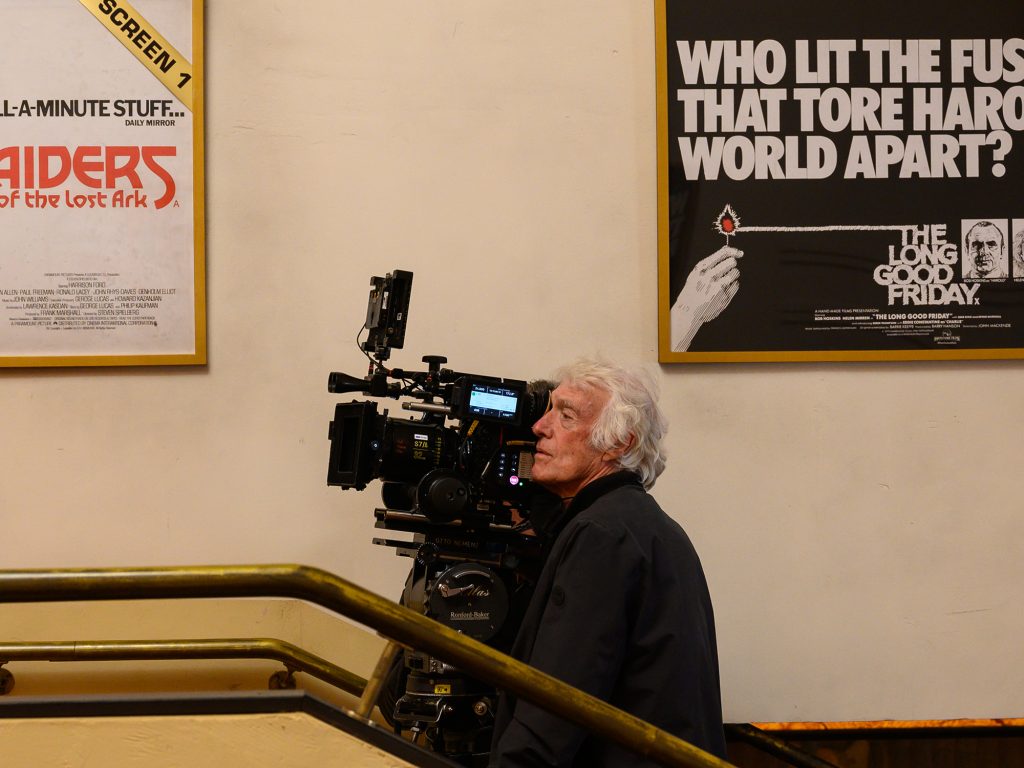 Roger Deakins is a film industry titan who needs no introduction. Accumulating an enviable list of directorial collaborators in a career spanning four decades (and counting), the pioneering, Torquay-born cinematographer is responsible for some of the most visually stunning frames in films by the Coen brothers, Denis Villeneuve and Martin Scorsese.

Working once again with five-time collaborator Sam Mendes, Empire of Light sees Deakins pare back on the ambitious single-take bravado behind his Oscar-winning work for 2019’s World War Two drama, 1917, by moving from a muddy battlefield to a homely coastal cinema that conjures as much nostalgia as the movies that light up its screens. Nevertheless, finding (or rather, building) the perfect cinema was just as much of a challenge.

LWLies: What did you like about Empire of Light the first time you read the script?

Deakins: It created a feeling of the time – the early 80s – that I remember. I left [English coastal town] Torquay by then, I was living in London and I was still shooting documentaries and segueing into shooting feature films. But I did still go back to Torquay a lot and so I remember the period very well.

Did you feel nostalgic?

I love seaside towns, and I think a lot of them been ruined recently by modern development where it wasn’t necessary. Some of the Georgian architecture and seaside architecture is being destroyed so I am quite sad about that.

I know the feeling. I’m from Aberdeen and the whole coast has changed so much in the past 20 years. The film made me think about the state of independent cinemas, especially the local cinema, Belmont Filmhouse, which was recently shut down.

I remember in Torquay there were five cinemas within walking distance from where I was growing up. But even then, I’d go and see a movie in the winter, there would be about four or five people. It’s sad! And now I think there’s only two, they’ve all gone.

Did you have a cinema you went to a lot growing up?

There were quite a few, it depends on the show. There was one in Torquay that generally showed European arthouse films. We had a little film club for a while that showed all sorts of films. And then there were the mainstream cinemas that showed Sound of Music, which I remember seeing on my first date. You had so many choices.

Do you recall any particularly fond viewing experiences?

Only at this little film club. In the winter, there’s not much to do in a seaside town, especially in Torquay. I would go to this film society and they had a little 16mm projector set up with a little freestanding fold-up screen, and they would show Alphaville and Last Year in Marienbad. I remember seeing Peter Watkins’ The War Game. That was a film that was only released to film clubs for a week or two and a couple of film festivals, and then it was banned by the BBC for 25 years. It’s basically about a nuclear attack on London, and it was so striking as a brilliant piece of filmmaking. But I particularly remember it because most of the people that went to this film society were old people who just went to the films because they had nothing else to do, and there were two elderly ladies in the front row who just collapsed. They fainted because it was so harrowing. The power of movies! Even if you watch the film now, it’s got a chilling reality to it. An absolutely truthful account of what would happen if a bomb landed on London. I remember that quite vividly. 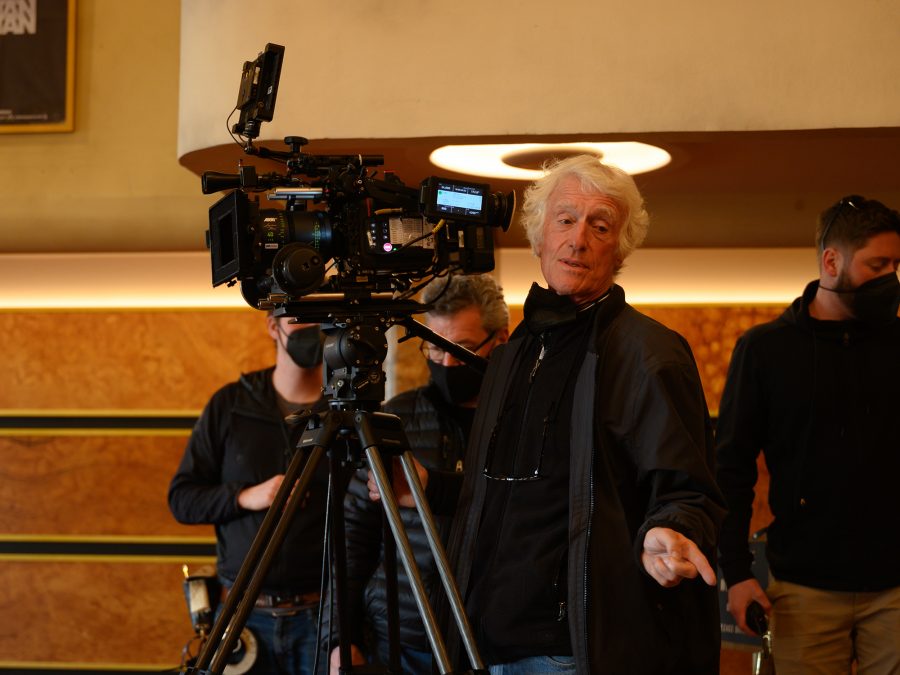 The last time you worked with Sam Mendes, it was for 1917, which had a lot of logistical technicalities and planning behind it. Did this film feel of a smaller scale or was it just as much an undertaking but perhaps in a different way?

I felt it was on a smaller scale because we didn’t have an endless shoot and we certainly didn’t have an endless amount of money for equipment – but you have to cut your cloth to fit. For instance, finding the cinema was a key thing which set us in Margate, whereas the original concept would have been Brighton, Worthing, or somewhere on the south coast. Once that’s made, then you have to decide what it offers you and what doesn’t work. The lobby of the existing cinema didn’t work, and that was always a problem with all the places we scouted. There was no lobby that worked in the way that Sam had envisioned it, so it was obvious it had to be built. Then the decision is, do you build it on stage, and do a whole fake background with a huge lighting rig? Or, do you try to build it on location? Luckily, there was this empty lot a few doors away from the exterior location of the cinema where we could build the lobby with virtually the same view as you would get from the existing building. It seemed like too good an opportunity to turn down.

What was wrong with the initial lobby? What were the requirements you were looking for?

Sam wanted quite an expansive lobby with this very strong view looking out towards the promenade and the sea. And he wanted this staircase going up to screen one – the upper level cinema. That was very much written into the script, the staging. All the lobbies we saw in existing cinemas on the south coast had very low ceilings, and didn’t have very open views of the sea. Dreamland, which is the location we ended up shooting at, was nice. It had a period, but the lobby was very low. And the entrance to the screening rooms was through a weird way out the back. We never found a lobby anywhere like Sam was envisioning, so we had to build it.

What conversations did you have with Sam Mendes about the visual identity of the film?

Originally, he was toying with the idea of shooting it black-and-white, and we talked about shooting it handheld to make it raw and immediate. I didn’t like the idea of black-and-white, I must say, but we talked around it and then decided, no, it should be much more restrained and quiet. There was so much character – it’s an actor’s piece, really. You don’t want to distract from the performances. You just want to allow them to be the characters within the frame. It’s quite a simple approach. You do have those conversations and then you scout locations and it just gradually builds, but so much of the film is created on the day, and it relates to the location and how the actors work in the space.

How was working with pigeons?

The pigeons were actually great. We had a pigeon trainer, the whole bit. The awkward thing is if Michael [Ward] had one fear, it was pigeons. Absolutely terrified of pigeons. So he had to spend quite a lot of time in pre-production and prep time getting himself over that so he could handle a pigeon. He had a real phobia about birds.

You’ve never had any reservations about shooting on digital, but what was the decision behind filming this on digital? Especially because Empire of Light has so much reverence for the art of projection.

There was no decision, really. We’d done 1917 on Alexa LF Signature Prime lenses and Sam said, ’Why don’t we just use the same system?’ I don’t remember any discussion about the idea of shooting on film. That would have been nice but there are so many more advantages of shooting digitally now, especially in terms of cost-effectiveness. Size of the cameras, using the stabilised rig. There are so many different reasons if you analyse why it makes sense to shoot digital. Do you see a difference anymore? Now and again, I’ll see a shot and think, ‘That does look digital.’ But then, when I remember when I shot film, I was saying, ‘Oh god, I don’t like the look of that because I can see it’s film.’ I shoot still film photographs. I wish I’d been a still photographer, and that’s why we published a book last year of my still photographs. I shot on film for years but I’ve been shooting digital ever since they made a digital camera, and I don’t regret it for a moment. It’s about the image, the light of the image, the feel of the image. I find it hard to tell with something shot digitally or on film if it’s been shot by somebody who knows what they’re doing.

There was something wonderful about shooting film, when there were no monitors on set, the director next to me, the actor in front. There was something pure and simple about that. But that was another world, one that’s long gone. Now there’s monitors everywhere, hundreds of monitors. I used to be the first person to see a performance in the frame, and that was always a thrill. It’s still a thrill watching it because I still feel like I’m seeing it before anybody else, even if it’s only the speed of light between that and the monitor. Now, the directors are hardly ever by the camera. They’re usually in a tent somewhere.

Well, they can do what they want. I love film, don’t get me wrong. The extreme version is I wish we were still shooting on film, but in black-and-white. I would love that. Maybe even better if we weren’t shooting sync sound. I mean, where do you stop? Where did colonialism start? As soon as we left Africa, we became colonists. We became imperialists. You can’t go back, the world changes. You can have regrets and you can be nostalgic for the way the seaside looked 50 years ago, but there are so many more advantages now. We no longer live in a beautiful, pristine world, but we have healthcare and education and hamburgers.