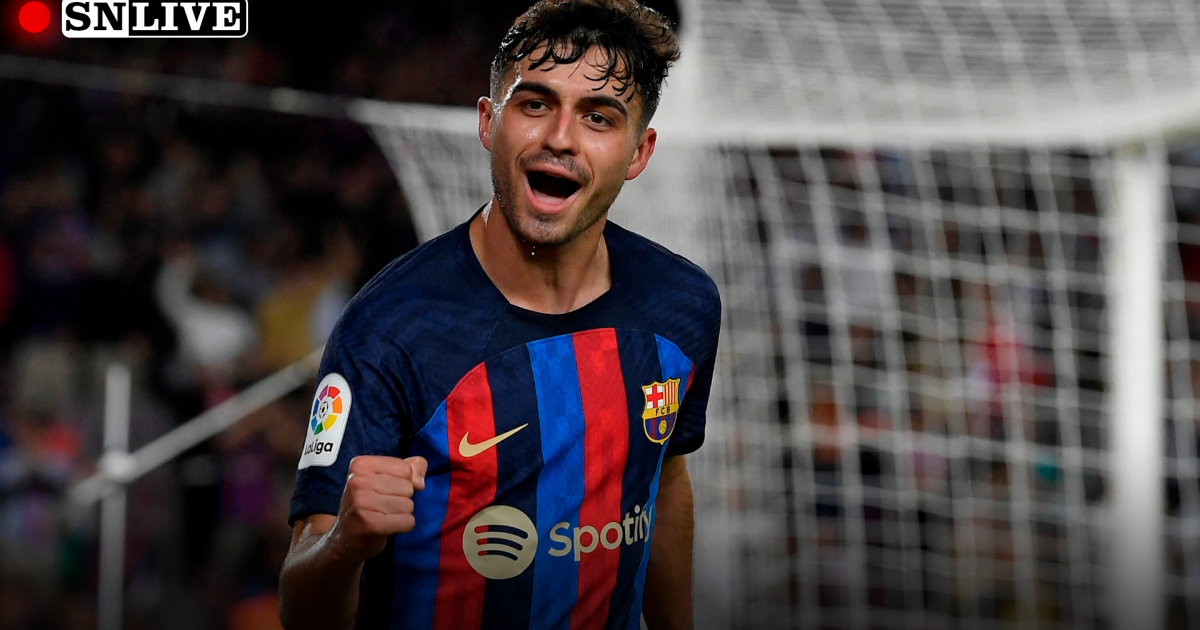 Barcelona lead the La Liga standings, having capitalized on a Real Madrid slip over the weekend to build a three-point gap at the top, yet the Blaugrana will know their form outside of league play has been poor as they meet Real Betis in the semifinals of the Supercopa de Espana on Thursday.

Xavi’s side was dumped from the Champions League group stage before the World Cup break, relegated to the Europa League for the second straight season, and they barely squeaked by lower-league side Intercity FC in the Copa del Rey just a week ago.

That will give Manuel Pellegrini and Real Betis hope as they clash, with a spot in the Super Cup final against Real Madrid on the line.

5 mins to kick: For anyone who wasn’t sure of the kickoff time for today’s match, the Barcelona social media account probably gave them a good scare!

11 mins to kick: The crowd for yesterday’s match between Real Madrid and Valencia was sparse, but today it appears at least somewhat more excitable. The players are out on the pitch and the match is almost under way!

35 mins to kick: While the senior Barcelona squad competes on a number of fronts, fans are always looking to see what the next generation of talent might bring. According to a report by ESPN that just came through, there could be a very special player in the future of Barcelona. The only son of former club great Ronaldinho, named Joao Mendes, is apparently on trial with the Catalan club’s U-19 team.

Mendes was with Cruzeiro’s youth side in Brazil for three years after signing with them at age 14, but departed them nearly a year ago and has not been with a team since.

Ronaldinho’s son is currently on trial with Barcelona’s U19 team, a source has confirmed to @samuelmarsden and @moillorens 👀🇧🇷 pic.twitter.com/RihBfMHqaK

47 mins to kick: The venue in Saudi Arabia, King Fahd Stadium, is quite the spectacle! It’s quite late at night in the Middle East already, as they are eight hours ahead of the U.S. east coast and three hours ahead of the UK. The match will kick off at 10:00 p.m. local time in Riyadh.

65 mins to kick: The Barcelona lineup is in. Frenkie de Jong starts in midfield alongside Gavi and Pedri, with Sergio Busquets rested. It’s an audition for de Jong who Barcelona hope can be a long-term replacement for the departing club legend after this summer, even though his general profile is slightly more advanced. The only other surprise for the Catalan club is Sergi Roberto at centre-back, with Andreas Christensen and Eric Garcia on the bench.

For Real Betis, 39-year-old Claudio Bravo gets a surprise start in goal against his former club, giving Rui Silva a game off. That’s one of a host of changes rung by Manuel Pellegrini, who is clearly prioritising the league as Betis push for a Champions League place, currently sitting fourth.

Full team news for both clubs below.

75 mins to kick: Real Betis wasted no time in securing a replacement at left-back for the departure of Alex Moreno to Aston Villa. Reports indicate that they have snatched 22-year-old full-back Abner Vinicius from Athletico Paranaense in Brazil. It’s a key move for the club as they fight for a Champions League place. Abner will battle for time with fellow 22-year-old Juan Miranda, who is expected to start today for Betis. Team news drops shortly.

95 mins to kick: The out-of-league form hasn’t been excellent this season for Barcelona, but they have secured results of late. A seven-match unbeaten run is the second-best ever under Xavi. They still have a ways to go to equal the incredible run of last spring, but a win here to advance in the Super Cup would set them up with a chance for a statement El Claciso result.

7 – @FCBarcelona have not lost in their last seven games played in all competitions (W6 D1), their best run since April 2022 (15), as well as being the second best under Xavi. Moment.#SpanishSuperCup#SpanishSuperCup2023 pic.twitter.com/EvTuq3RJfM

120 mins to kick: Xavi didn’t say anything earth-shattering ahead of the Supercopa semifinal, but it was interesting to hear him admit he expects Real Betis will press high and play an attacking style. If that’s the case here, it could make for an entertaining match with plenty of goals.

🎙️ The best of what Xavi had to say ahead of #BetisBarça in the Spanish Super Cup semifinal pic.twitter.com/oQG7k8UXJf

Betis right-back Youssouf Sabaly is sidelined with an ankle issue that will keep him out at least through the end of January, meaning that Aitor Ruibal will continue to deputise.

The biggest decision for boss Manuel Pellegrini was to be in midfield, and he tabs Guido Rodriguez to play on his own as a lone holding midfielder, sitting William Carvalho on the bench.

There was a decision to be made wide left, with Sergio Canales, Juanmi, and Rodri Sanchez all in contention. Pellegrini opts for two of the three, with Canales and Rodri both in the mix flanking playmaker Nabil Fekir.

Real Betis subs (11): (Lineups released one hour prior to kickoff)

Barcelona striker Robert Lewandowski is serving a three-match suspension, but that only applies to league play, so he is eligible to play in this match and will surely do so to keep himself match fit throughout his La Liga time off. The same goes for Ferran Torres who was sent off against Atletico Madrid after wrestling with Stefan Savic.

As expected, Xavi decides to rest one of his regular midfield trio, given the fixture congestion through the latter half of this season, meaning aging Sergio Busquets drops to the bench for Frenkie de Jong.

Otherwise, Barcelona have a clean bill of health, as Raphinha returns to the starting lineup after Ansu Fati got the nod against Atletico Madrid. Sergi Roberto gets a start at centre-back, with Andreas Christensen and Eric Garcia available off the bench.

How to watch Real Betis vs Barcelona

Select broadcasters in countries around the world will carry the matches from the Spanish Supercopa, including in the UK and USA.

For other regions that don’t have a local broadcast or stream, fans can access the matches on streaming platform Shahid VIP, as indicated by LiveSoccerTV.

UK: The Supercopa will be carried in the UK on BT Sport’s TV and streaming platforms.

USA: The match will be televised on ESPN2 (English) and ESPN Deportes (Spanish) with both those televised matches streaming on fuboTV. ESPN’s streaming service ESPN+ will also carry streams in English and Spanish for subscribers.

The La Liga leaders are understandably favorites in this match, as they have built a three-point lead over Real Madrid in the title chase.

However, Barcelona have been shaky in all competitions outside league play. They were dumped out of the Champions League in the group stage and have been relegated to the Europa League knockouts, while they were pushed to the brink by third-tier Intercity in the Copa del Rey Round of 32 just last week.

Regardless of the result, goals are expected to flow in this match. Both teams are favored to find the back of the net, and the game is easily expected to go over the 2.5 total goal mark.

MORE: Why is the Spanish Supercopa held in Saudi Arabia?